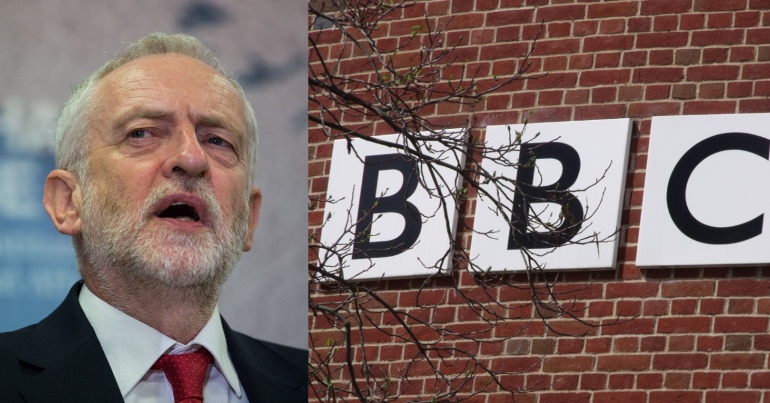 As The Canary extensively reported during Jeremy Corbyn’s leadership of the Labour Party, figures from the Conservative Party, the Labour right, and the establishment media orchestrated a transparently politically-motivated smear campaign against him. Their weapon of choice was employing a litany of bogus accusations of antisemitism to paint the lifelong anti-racism campaigner as some kind of bigot.

The purpose of the campaign was straightforward – they sought to derail his chances of becoming prime minister and distract attention from his (widely popular) policy proposals. Their motive was equally straightforward – they rightly feared the threat that a Corbyn-led government would pose to the status quo and their own political and economic interests. Now, one of the major players in this campaign has admitted that its whole underlying premise was false all along.

From name-calling to contorted attempts to tar by association

Canary readers will hardly need reminding that Corbyn’s time as leader as of the Labour Party saw him and his supporters come under a relentless attack from all the usual suspects. This included all the predictable childish name-calling about Corbyn belonging to the so-called ‘loony left’, taking part in ‘student union‘ politics, and acting like an ‘armchair revolutionary‘. It also involved desperate attempts to tie him to controversial organisations such as Hamas and the Irish Republican Army (IRA).

All of these smears were transparently preposterous and easy to debunk. But they nonetheless pail in comparison to the prime weapon used to besmirch him. Namely, political opponents latched on to a tried and trusted tactic for attacking friends of the Palestinian people – the risible notion that those who criticize Israel’s human rights abuses are usually motivated by hatred of Jews.

As would be expected, the right-wing gutter tabloid press played a leading role in utilizing this false premise to smear Corbyn. Again, these attempts, from the wreath laying controversy to the ‘muralgate‘ scandal (which even the nominally progressive Guardian joined in on), have been roundly debunked by journalists and scholars. But nonetheless, the antisemitism smear campaign has continued apace and, indeed, morphed into an all-encompassing attempt to attack anyone on the left more broadly.

But now, in early 2022, over two years since the peddlers of the campaign succeeded in derailing Corbyn’s chances of becoming prime minister, one of the most flagrant offenders of all has now essentially admitted that the whole thing was a farce all along. Astonishingly, during a radio broadcast of BBC 5 Live, presenter Rachel Burden said matter-of-factly:

there is absolutely no evidence that the leader of the Labour Party at that time [in 2019], Jeremy Corbyn, was or is antisemitic.

Burden made the comments to clarify some of the comments made during an interview early in the show with the Conservative Party donor and ‘Phones4U’ billionaire John Caudwell. She acknowledged that Cauldwell had described Corbyn “as being an antisemite and a Marxist.” She added:

I redirected him back on to the conversation, which was all about Boris Johnson. That’s what I wanted him to talk about. But I should have challenged him on the particular allegation of antisemite [sic].

I apologize for not challenging that more directly, should have done, and I want to emphasize there is no evidence for that at all.

An allegation that’s absurd to its core

Burden’s apology should be welcomed (though it’s all rather a case of ‘too little, too late’). But the bigger point is that this admission exposes how the central underlying premise behind the smear campaign as a whole is, and always has been, completely false. As The Canary has argued on many occasions, the idea that most or even many critics of Israel are antisemitic is patently absurd. Indeed, many of Israel’s fiercest critics are themselves Jewish. This includes political scientist and expert on the conflict in Palestine Norman Finkelstein, who is himself not only Jewish but the son of Holocaust survivors, and Israeli historian Ilan Pappé, whose father fled from Nazi occupied Europe to Palestine.

Finkelstein explained to The Canary during an exclusive interview how the British ruling establishment cynically and enthusiastically went along with, and indeed actively participated in, the antisemitism smear campaign because they had a common enemy in the form of Jeremy Corbyn. He said:

The British elites suddenly discovered ‘we can use the antisemitism card in order to try to stifle genuine… leftist insurgencies among the population’. And so what used to be a kind of sectarian issue waged by Jewish organisations faithful to the party line emanating from Israel vs critics of Israel, now it’s no longer sectarian because the whole British elite has decided they’re going to use this antisemitism card to stop Jeremy Corbyn and the political insurgency he represents.

Finkelstein went on to liken the smear campaign against Corbyn to the Salem Witch Hunts. He said:

Except when you take the classic examples, the anti-communist hysteria, the Salem Witch Hunt hysteria, you really can’t come up with parallels.

Another shot at Number 10?

Such an admission from the BBC demonstrates perhaps better than anything else just how cynical the smear campaign was all along. It also raises some serious questions about the legitimacy of the outcome of the 2019 general election, and, indeed, the legitimacy of British democracy more broadly. After all, if one party leader was getting constantly attacked with false allegations then he can hardly be characterized as having had a fair shake at striving for the UK’s top job.

This raises the question of whether Corbyn should be given another shot. And it seems that many in the public now think so. According to one poll, reported in the Express of all places, “Jeremy Corbyn is the preferred choice of Red Wall voters for Labour leader if Sir Keir Starmer was to step down.” Though Starmer’s position seems to have been saved for the time being by improved polling for Labour (likely due mostly to increasing dissatisfaction with the Tories), this might not even end up mattering.

There are rumors swirling around social media that Corbyn might be on the brink of establishing a new party. This, of course, would free him from the ossified internal structures of the Labour Party, not to mention the constant backstabbing from the Labour right he experienced as leader. Perhaps there will soon be an opportunity to challenge the status quo and bring about radical change once more.