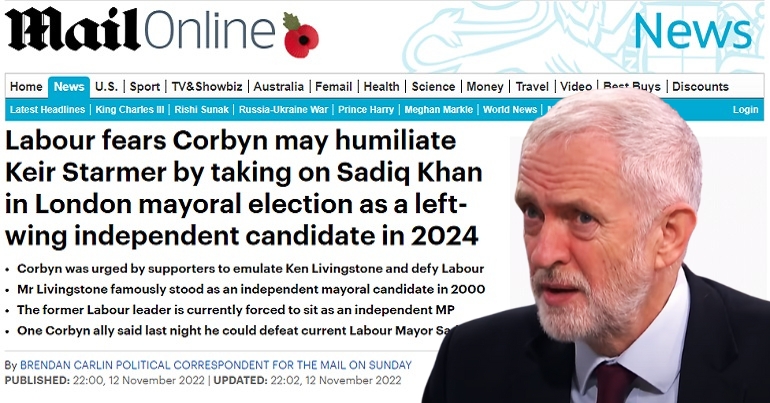 Jeremy Corbyn has made the headlines in recent days – mostly in right-wing outlets. As the former Labour leader said, he appears to be living rent free in their heads – along with the complimentary stay Rishi Sunak is giving him. So, what would be more delicious than Corbyn moving in permanently, by running to be London mayor?

Corbyn: will the whip ever come back?

The right-wing media has had a splattering of stories on Corbyn recently. First, the Times reported that members of Keir Starmer’s shadow cabinet are urging him to permanently remove the whip from Corbyn. This comes after Sunak has repeatedly referenced the former Labour leader at Prime Minister’s Questions (PMQs). The Times noted that one shadow cabinet member said that:

Keir’s position in the party is very strong now. We need to be able to say clearly that there will be an excellent Labour candidate in Islington North at the next election who shares Keir’s values, and that person will not be Jeremy Corbyn. The party has a long rule book so it’s tricky, but things will move on Corbyn soon.

The problem for Labour is that Corbyn’s position in Islington North is strong. As one person tweeted:

A higher 72% of the electorate turned out to vote in Islington and of those 72%, over 3/4 voted for Jeremy.

Therefore, as the Guardian asked, what Labour member would want to even try to unseat Corbyn?

Favourite bit of this were the claims there's a "silent majority" of people who hate Jeremy in Islington North CLP, followed by an admission that nobody wants to take him on because they'll get absolutely fucking battered electorally.https://t.co/f8UuT47pwx

It seems some of Corbyn’s Constituency Labour Party (CLP) is behind him, too. The Morning Star reported that one faction of the CLP told it that talk of Starmer permanently removing the whip was an “egregious affront” to Islington North residents. The group, Islington Friends of Jeremy Corbyn, told the Morning Star:

Unlike other MPs, Jeremy’s second job is not as a lobbyist or hedge fund manager — he’s a volunteer at a local foodbank… He is frequently out on the picket lines in solidarity with Islington workers. He speaks truth to power, which is why he is so loved but also why he is so feared and reviled.

So, what do you do if you’re the right-wing media and you know that Starmer’s Labour has no chance against Corbyn? Well, you cause mischief elsewhere.

As the Mail on Sunday reported, and MyLondon repeated, apparently Corbyn “supporters” are urging him to stand as London mayor in the 2024 election. Josiah Mortimer wrote that:

the Mail on Sunday reports that the left-wing ex-leader is being urged by supporters to mimic Ken Livingstone’s 2000 election efforts, after he was blocked from being the Labour candidate but won as an independent. However, the voting system in 2024 will be different, with no chance for people to put a second preference and limit the number of wasted votes.

A Corbyn ally told the paper: “Jeremy would win and plenty of people around him are urging him to do it.” One MP close to Jeremy Corbyn told MyLondon he had ‘no idea’ if the rumours were true. And Ken Livingstone, the former mayor of London, told the Mail Mr Corbyn would be ‘bloody good’ in the role.

London Mayor is just a carrot to tempt Corbyn away from being an MP.

While Corbyn is an MP he's a reminder of just how terrible the "Centrists" are at opposing.

Others thought it would be a good idea:

I would put my heart and soul into campaigning for Corbyn as London Mayor.
This is still the greatest city on earth. It deserves a Mayor with the right vision, compassion, and policies. https://t.co/imGtcLbazb

However, whatever happens it seems the saga of the former Labour leader and his party won’t be over anytime soon. Even on Monday 14 November, the whip story was rumbling on – with the Guardian reporting that:

even if Corbyn does apologise “unequivocally, unambiguously and without reservation” the leadership would be reluctant to let him return.

One senior Labour figure said: “Jeremy Corbyn is never getting back in. He would be toxic to our chances of winning back some of the seats we need to win back.”

It means that if Corbyn wants to remain an MP, he will have to stand as an independent in his Islington North seat.

So, we’ll have to wait and see on what grounds, and for what job, Corbyn fights to be elected in 2024. One thing is for certain – at least he’s got some rent-free living available to him.