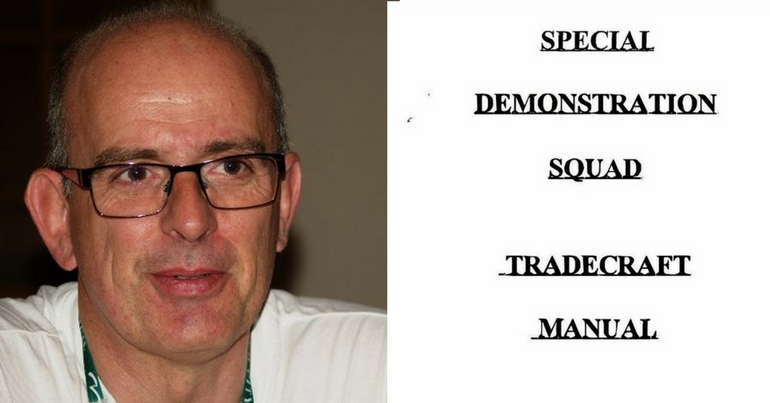 Conservative councillor Andy Coles was confirmed to have been a former undercover police officer on 19 March. Using his cover name, Andy Davey, he had infiltrated a number of peace and animal rights’ groups in the 90s.

At the same time as confirming Coles’ involvement, the Undercover Policing Inquiry released Tradecraft, a ‘manual’ he wrote for other officers infiltrating ‘extremist’ [pdf, p24] groups. Much of the document is redacted, but there are still plenty of words of wisdom from Coles.

Here, in no particular order, are some of them.

1. Activists dress funny. You’ll have to do the same to fit in.

Being a little untidy, smelly and rumpled is a natural state for many of the people in our target groups [pdf, p18].

The crusty lifestyle in particular is really unpleasant. You will be expected to eat food you wouldn’t put in your own bin, drink tea from cups which appear to have grown their own beards and sit on furniture which is alive…Worst of all, they smell disgusting in the summer months! [pdf, p35]

4. The wearies are a bit thick…

Don’t worry too much about being found out because:

The wearies [people being infiltrated] are generally not sophisticated in their counter intelligence capability [pdf, p25].

However, if a ‘weary’ catches you with your real family:

Always bear in mind that it is extremely difficult to explain to a weary why you are pushing a pram and holding the hand of a toddler who calls you ‘daddy’ when they know you have no children! [pdf, p31]

You should always be prepared for the tedium of waiting for a weary to knock on your door, sitting outside a police station for 12 hours until your last comrade is released or taking part in a week of mind-numbing discussions on political theory [pdf, p29].

7. You’ll need a motorbike helmet in case a weary moves in nearby.

In the short term you may be able to return home in the early hours and avoid going out of your house unless it is dark, by wearing a full face motorcycle helmet or voluminous coat with a hood [pdf, p33].

8. Prepare to go a bit gooey-eyed about animals.

If you have any sense of sympathy for the cause of animal welfare you can find your new attitudes affecting your real life. I know in the future I will have nothing but contempt for foxhunters and in particular their terriermen [pdf, p37].

It’s notable that this “contempt” has not prevented Coles being a councillor for a pro-foxhunting party.

The pacifists tend to be robust but vehemently anti-violence…They tend to be very loving and an infiltrator should not be surprised when male and female comrades hug him or her to their bosom [pdf, pp37/38].

10. Never look a weary in the eye after your time as an infiltrator.

If at any time you find a former weary in close proximity to you when you leave the field you must make every effort to avoid them. Eye contact with a weary is likely to mean recognition, so you should get as far away as possible as soon as possible [pdf, p42].

And there you have it. Now anyone can be a spycop. All you need is a motorbike helmet and a clothes peg.