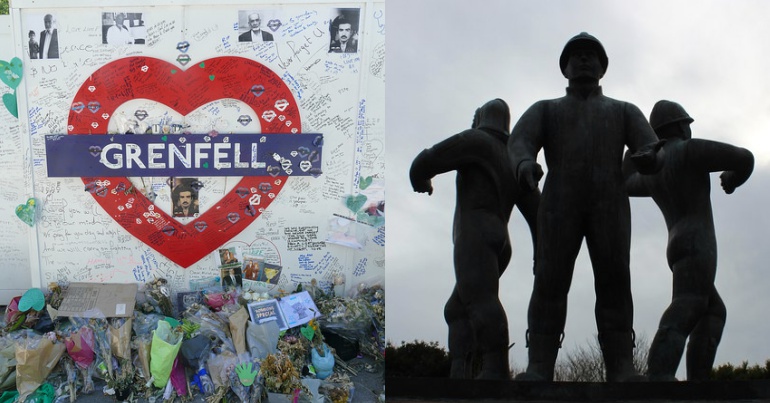 On 6 July 1988, the Piper Alpha oil rig exploded in the North Sea and 167 people died. As the BBC reports, “a 13-month inquiry led to a radical overhaul of safety practices” to ensure a disaster on this scale would never happen again.

But 30 years after this tragedy, experts have questioned why lessons learned from Piper Alpha were not applied to other industries. It’s possible, for example, that lessons from Piper Alpha might have prevented the Grenfell Tower fire of 2017. And there are even deeper concerns because, 30 years after Piper Alpha, the relentless push for profits by greedy corporations still present a terrifying threat to people’s lives.

While reflecting on the improvements industry as a whole has made over the last 30 years in understanding and managing risk in the workplace, it saddens me to see another disaster hitting the headlines.

The Press and Journal reported that Temple said it was also:

“pertinent” following another major loss of life in the London fire to reflect on why recommendations made after the North Sea blaze did not result in other industries adopting good practices.

Although safety measures were put in place following the Piper Alpha inquiry, there were no criminal charges. Occidental, the owners, and the then-Conservative government were heavily criticised – and Labour called for prosecutions. But these didn’t happen. And 30 years later, Occidental’s profits are still rising.

Although the Grenfell inquiry is ongoing, there are similar concerns that no criminal charges will be brought against those responsible. And there are many other tragic similarities between the two disasters.

Reports from emergency services in both disasters are equally harrowing. The oil rig had simply not been built to withstand the scale of the fire:

The firewalls were not designed to withstand explosions, and even as the control room was abandoned, after Mayday had been signalled by the radio operator, the fire in the night proved lethal.

How could workers on the Piper Alpha and firefighters entering Grenfell Tower know, amidst the chaos, that cut-price materials and substandard safety systems appeared to have rendered normal safety procedures meaningless.

It also pointed out that both disasters took place with a Conservative government in power:

In the years preceding both disasters, an explicit profit-above-safety ethos was enthusiastically championed in government. This is not controversial. The Piper Alpha public inquiry pointed to a conflict of interest in government that had ensured safety regulations either did not apply offshore or were simply not enforced.

And chasing oil profits in the 1980s runs dangerously close to the current race for profit from land and property.

Workers on Piper Alpha were paid well but worked in:

conditions that put their lives at risk. And if they complained about it, they weren’t asked back.

Because as the Press and Journal reported:

Producing more oil more quickly seemed to be all that mattered, macho behaviour was the order of the day, health and safety concerns were suppressed and trade unions struggled to win recognition.

In 2016, Grenfell residents warned that:

only a catastrophic event will expose the ineptitude and incompetence of our landlord… and bring an end to the dangerous living conditions and neglect of health and safety legislation that they inflict upon their tenants and leaseholders.

The constituency of Kensington is “the wealthiest in England”. But the Guardian points out that it’s also “among London’s most unequal, with extreme poverty and wealth living side by side”. As property prices rocketed, those who had the least were subject to cost-cutting exercises that threatened lives. And as openDemocracy has noted:

At both Grenfell and Piper Alpha a chain of sub-contractors was used to minimize costs and maximize profits.

Ultimately, it said, people died in both fires because:

The victims came face-to-face with the consequences of cost-cutting at the very moment they needed to escape.

The HSE was right to compare these tragedies. Lessons from Piper Alpha could have saved lives. But above both disasters lurks the spectre of neoliberal capitalism. As the Guardian has reported:

Britain is still home to plenty of neoliberalism’s beneficiaries: hedge funders, homeowners with the right kind of property, disproportionately rewarded “top talent” from footballers to management consultants, and companies built on cheap labour and loose regulation.

Margaret Thatcher was in power when the oil rig caught fire, and 30 years later Theresa May heads up another Conservative government. Both, openDemocracy stressed, have pushed forward “a neo-liberal model of capitalism that puts people at risk and asks questions later”. It’s precisely what leads to cost-cutting exercises and putting corporate profits over safety.

This has to end.

The Grenfell inquiry is ongoing, but it is vital that those who put profit before lives are held accountable. Whatever lessons may emerge, these need to prevent another large-scale loss of life. There are too many similarities between Alpha Piper and Grenfell to be ignored. And it is clear that greed and profit can kill.

Tragically, 72 people died in the Grenfell fire. But continued public pressure can help to ensure that their legacy – and that of the Piper Alpha victims – is never forgotten.