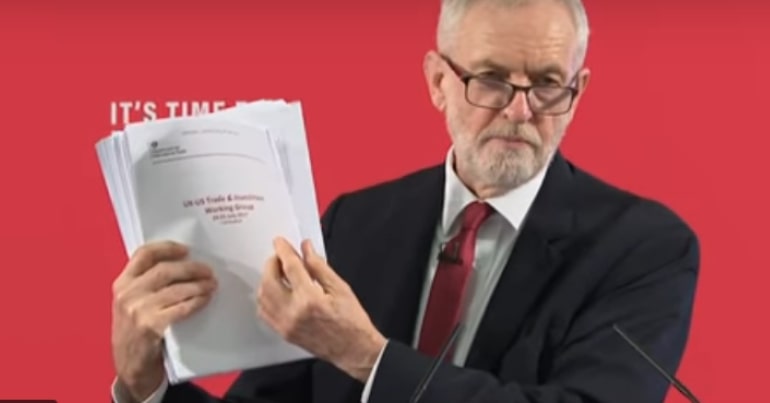 UK government-funded researchers helped ensure that what should have been a fatal blow to the Tories’ election campaign became, instead, a smear aimed at Labour leader Jeremy Corbyn.

On 27 November, Corbyn famously revealed a redacted set of documents, followed soon after by the un-redacted versions. These recorded secret talks between the Conservative government and the US over post-Brexit trade relations:

These covered a range of topics, including pharmaceutical trade. For example, on page 48 of the second report:

The US said there is a lot of conversation on drug prices and looking at what other countries pay and this is causing angst. There are worries that the US is not getting a good deal in pharmaceutical industries.

The revelations were dynamite, and, as with the story about a young boy at Leeds General Infirmary, should have proved highly embarrassing for the Tories.

But that was not to be. Fortunately for Conservative party leader Boris Johnson, help was at hand.

Enter Digital Forensic Research Lab (DFR Lab), an arm of the arch-conservative Atlantic Council. The Foreign and Commonwealth Office (FCO) funded DFRLab £450,000 and £39,968.41 in 2018 – figures for 2019 have not yet been published. The Atlantic Council is also funded by the FCO and an array of companies.

Ben Nimmo, a senior fellow for information defense at DFRLab, was one of the authors of the Operation Secondary Infektion report for the Atlantic Council. He subsequently penned a Graphika report that referenced that Operation and concluded the US-UK trade talks documents were likely published (via Reddit) by ‘Russians’.

Corbyn came upon the un-redacted versions of the documents thanks to Global Justice Now. However, the Tory press chose to focus on the alleged ‘Russian’ connection. For example, this article published by the Daily Telegraph was headlined: Russia won’t deny hackers leaked Jeremy Corbyn’s NHS documents, saying:

Jeremy Corbyn hinted yesterday that he had downloaded minutes of US-UK trade talks from a website where investigators increasingly believe it had been placed by Russia.

And there was a similar article by the Daily Mail. In both cases, establishment media referenced the Graphika report.

It was all about distraction from the very important content of documents that appeared to prove the Tories’ Brexit would be hugely damaging to the UK.

As well as the Atlantic Council and DFRLab, there are other key players identified as specialising in disinformation research. These include the British army’s 77th Brigade, the Joint Threat Research Intelligence Group (JTRIG), and the Integrity Initiative.

As reported by The Canary, Integrity is a propaganda network funded by the FCO, the Ministry of Defence (MoD), the US State Department and NATO, via the Institute for Statecraft. Nimmo previously consulted for Integrity.

In December 2018, The Canary reported how Integrity had posted a number of tweets attacking Corbyn, describing him as pro-Kremlin. Journalist Mark Curtis reported other attacks on the Labour leader by Integrity and the Atlantic Council.

Also, in May 2019, defence minister Penny Mordaunt announced that £22m would be available for new army cyber operations centres. According to Warfare Today, these centres would specialise in identifying malware and fake news and:

work with existing Army capabilities, such as the 77th Brigade – a modern and information-focused British Army unit – but will also have regular contact with joint and other national security organisations.

The 2019 general election was probably one of the dirtiest in UK history, with fraud, smears, and (in the lead-up) disinformation featured at every stage. The Canary also listed examples of disinformation organised by the Conservative Party:

And then there was possibly Johnson’s biggest lie – that Brexit was “oven ready”, for it may well end up as a no-deal crash out.

No doubt information manipulation by the billionaire-owned media will continue to be a significant feature of the right-wing dominated corporate media.

Or, as Hannah Arendt prophetically put it in Origins Of Totalitarianism:

In an ever-changing, incomprehensible world, the masses had reached the point where they would, at the same time, believe everything and nothing, think that everything was possible and that nothing was true… Mass propaganda discovered that its audience was ready at all times to believe the worst, no matter how absurd, and did not particularly object to being deceived because it held every statement to be a lie anyhow.

Indeed, according to First Draft News, 88% of Conservatives’ political ads on Facebook were “misleading”. But, as The Canary reported, Facebook admitted that posts from political organisations and political adverts were – and are – exempt from fact-checking.

In January 2019, Facebook announced it was joining forces with the Atlantic Council’s DFRLab.

The Conservative government is now possibly at it’s most dangerous and has already signalled it intends to consolidate power to ensure Labour never becomes anything other than an impotent opposition. As the first step in this process, it hopes to radically overhaul the constitution, repeal the Fixed-Term Parliament Act, and change constituency boundaries in its favour.

We have entered a darker age, where nothing can be trusted about anything ever again. This is the new norm.

And if this analysis proves correct, the role of independent media in exposing false narratives will be even more crucial.