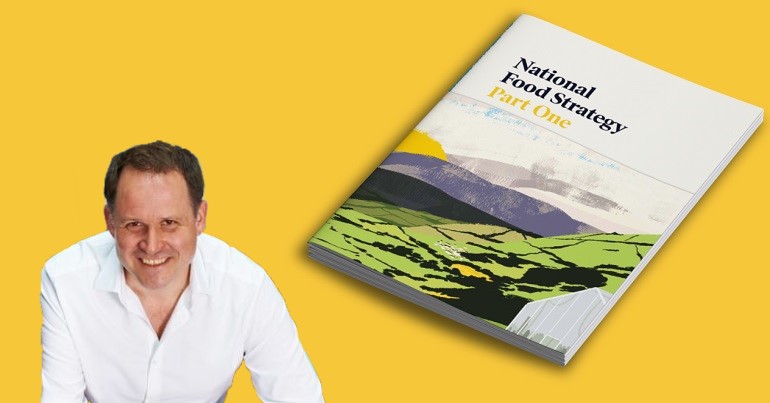 Henry Dimbleby, a restaurant owner and son of former Question Time host David, has released a government-commissioned report into food poverty and hunger. It calls for overarching measures to tackle a potential rise in food-related inequalities due to the coronavirus (Covid-19) pandemic. But when it’s written by a Dimbleby, you know there’s a problem.

Dimbleby and the National Food Strategy

The National Food Strategy Part One deals with the potential rise in food insecurity and poverty due to the pandemic. The report states that:

Our food system has just endured its biggest stress test since the Second World War. As COVID-19 swept through the UK, the entire machinery of supply and distribution had to be recalibrated, fast.

the wave of unemployment now rushing towards us is likely to create a sharp rise in food insecurity and outright hunger.

At the same time, the virus has shown with terrible clarity the damage being done to our health by the modern food system. Diet-related illness is one of the top three risk factors for dying of COVID-19. This has given a new urgency to the slow-motion disaster of the British diet. Even before the pandemic, poor diet was responsible for one in seven deaths in the UK (90,000 a year)…That is vastly more than the death toll from traffic accidents (1,780 a year)… and almost as fatal as smoking (95,000)…This is a medical emergency we can no longer afford to ignore.

As the report notes, during the height of the pandemic, foodbank use rocketed. Meanwhile, the number of adults in early April who said they had experienced some kind of ‘food insecurity’ hit 8.1 million. It also says that the majority of “new” foodbank users during the pandemic were young people and those with children. And the situation is looking bleak. The report says:

The UK economy shrank by an unprecedented 20% in April as the country went into lockdown. Every day we hear reports of well-known companies going bust or laying off swathes of their workforce. According to the latest figures, there have been 3.3 million new claims for Universal Credit since March 16th, 9.3 million employees have been furloughed and a further 2.4 million people have applied for the Government’s Self Employed Income Support Scheme. By October, when the furlough scheme comes to an end, the Office for Budget Responsibility estimates that 1.6 million more people will have been made redundant.

The report’s recommendations are broad, and fall into two areas. Perhaps most urgently, to protect “our most disadvantaged children”, the report says the government should:

The report’s second area is around the notion of ‘food sovereignty’. It recommends, among other things, that any trade deals post-Brexit do not compromise UK food standards.

Instant measures to protect children now and in the future should be welcomed. But at the heart of Dimbleby’s report is an unsettling contradiction. Because he and his fellow authors recognise that poverty and hunger are complex issues. But it fails to give solutions which match these, or to give solutions at all to some entrenched problems.

The report includes some evidence, both statistical and anecdotal, of the impact poverty has on food security and health. For example, it says:

Yet it also claims that poverty alone isn’t a driver for obesity. The report notes socioeconomic-based analysis that claims that while poor people may be obese due to ‘pound stretching’ (poverty), rich people could be obese due to being ‘restaurant eaters’.

While this may be true, the report fails to give advice tailored for these individual groups. Moreover, it doesn’t give solutions to the problem of ‘choice’. That is, rich people have the choice to eat in a restaurant every night of the week. But poor people don’t have the choice of whether or not to eat what is considered unhealthy food – whether that be due to finances, time poverty or the social psychology of cheap, tasty food.

This lack of joined-up thinking is even more damning when you observe that a section of the report acknowledges that:

It may be possible in theory (and for some, in practice) to assemble a healthy meal for just 70p. But the practicalities are not straightforward. You can’t buy a single chicken drumstick, a handful of peas or a 10g blob of butter from the supermarket. You have to buy a pack of drumsticks and a bag of frozen peas and a pack of butter, which would immediately take you over the 70p threshold. Assuming you can pull together enough money to pay for all this, you could store the extra food to make future meals: but only if you have a big enough freezer. (Or any freezer at all.)

The dietary inequalities we see are caused by many interlocking, and well documented factors: stress, and the impact stress has on appetite and energy, lack of equipment (1.9 million people are living without a cooker and 900,000 people without a fridge) poor skills, the cost of energy and a fear of waste that comes from having no margin for error.

Also, Dimbleby himself notes from his experience volunteering at a foodbank:

The roll-out of Universal Credit was a recurring theme, as people struggled to make ends meet while waiting five weeks for their first payment. Even after the Government introduced a 100% advance payment to help bridge this gap (in January 2018) many people decided they would rather go without in the short term than have to pay back the advance in the form of lower payments in the longer term. These people’s stories had nothing to do with the food system: they were problems of poverty, mental illness, domestic abuse, and often revised or delayed benefits claims.

But the report fails to make the basic recommendation, called for by some charities and thinktanks, of ending the five-week wait for a first Universal Credit payment.

Instead, the report recommends what are essentially sticking plasters – not least expanding the Free School Meals programme. To be fair to Dimbleby, there are a number of caveats which marginally counterbalance the less-than desirable aspects of the report. He has at least attempted to understand the social psychology of food poverty and the resulting ill-health among poor people. The report also includes testimony from someone who’s experienced poverty and Universal Credit. And there is a Part Two coming; as Dimbleby notes, in Part One he does:

not examine whether debates on the edge of nutritional science – about ultra-processed foods, for example, or the microbiome – are fads or the way of the future. There is much more to say about diet-related disease in general, and about the role of science, research, innovation, and data across the whole system. All these topics will be covered in detail in Part Two, to be published in 2021.

But ultimately, all this is irrelevant. Because the report fails to acknowledge the elephant in the room. It is inequality and a system which entrenches those divides, which is the reason society’s poorest people can’t eat well. If richer people decide to eat too much unhealthy food and drink a lot of alcohol, it is often and in no small part through choice. Under corporate capitalism, poor people are not afforded that same luxury.

Sadly, whatever good intentions Dimbleby may have had have not manifested in his report. And herein lies the problem. Because when you get someone from a rich, privately educated background to comment on issues they’ve never experienced, then the outcome will always be the same. The UK’s poorest people no longer need blunt, crude and top-down measures to alleviate their suffering. They need a system change to banish the scourge of poverty for good.