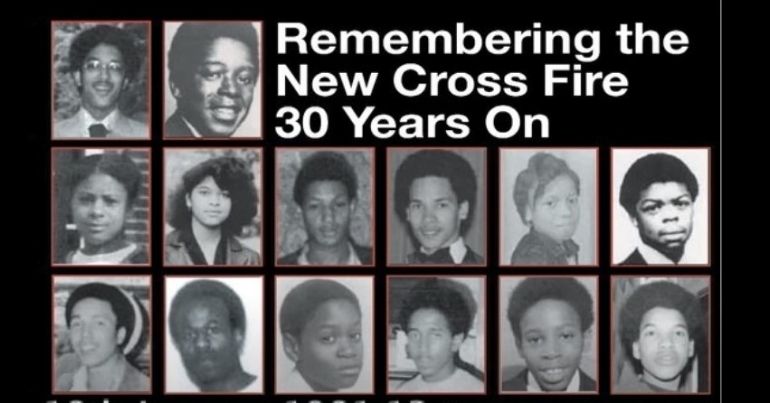 40 years ago yesterday, on 18 January 1981, thirteen Black young people were killed at a birthday party held at a house in New Cross, southeast London.

Over 50 people were injured. Two years later Anthony Berbeck who also attended the party died after falling from a block of council flats in South London on July 9, 1983. The coroner at the second inquest into the fire said Berbeck died “following the trauma brought on by the fire”.

Remembering the victims of the New Cross fire today on the 40th anniversary of this tragedy. We will never forget. ❤️ #13DeadNothingSaid pic.twitter.com/CpcrfOsuto

The party was intended to celebrate the 16th birthday of Yvonne Ruddock and friend Angela Jackson but it instead resulted in horror which sparked political action against racism and a criticised police investigation.

Racial tension during the 80s – particularly in New Cross – was no secret. The National Front, a far-right racist group was also active in the area at the time.

Like most house parties, the celebrations continued into the night and claims of noise complaints resulted in the police concluding that the house had been attacked as an act of revenge or arson to silence the party. Since then, police have confirmed this was not the case.

The Black community’s resistance stood at the forefront as hundreds of protests took to the streets to fight against racial inequalities in what many believed was a ‘cover up’ response from the London Metropolitan Police. On 25 January 1981, people from all over the country gathered to take part in the march.

Much like the Black Lives Movement which has held a place on our TV screens and in the media throughout last year – history seems to continuously repeat itself all over the world.

13 murdered and nothing said ! In January 18th 1981, a blaze killed 13 black teenagers at a London house party in a suspected racist attack. 40 years on from the New Cross fire , what has changed for Black Britons? pic.twitter.com/okyKNa3BNy

After grieving protestors marched to the House of Commons, the Black People’s Day of Action march begun on 2 March 1981.

Two inquests have taken place, one in 1981 and another 2004. Both returned open verdicts. The coroner in the 2004 inquest concluded that:

While I think it probable … that this fire was begun by deliberate application of a flame to the armchair near to the television … I cannot be sure of this.

“13 dead and nothing said” became the slogan of the New Cross fire. There was no accountability then, and in 2021 there have still been no charges made. Likewise, the effort to catch those responsible for the deaths of thirteen innocent people lacks care and drive from the police.

New Cross is a more than a story of great loss; it’s a staple in history which perfectly illustrates the racial violence and abuse that is faced by Black people in Britain.

Menelik Shabazz was living in London during the fire after moving to the UK from Barbados and decided to capture the community response in his film production Blood Ah Go Run.