Exposed: Devastating DWP cuts have led to more people dying during the pandemic - The Canary

Department for Work and Pensions (DWP) welfare cuts have had a “direct” and “negative” impact on people’s mental and physical health. That’s the view of a new report into the UK’s social security system. Moreover, the research also highlights how DWP’s changes over the past five years led to a perfect storm of deprivation and ill health when the coronavirus (Covid-19) pandemic hit. Taken as a whole, the report’s findings suggest a greater number of people have died and suffered during the pandemic because of the cuts.

In 2016, the Conservative government put in place the Welfare Reform and Work Act. It made sweeping changes to the social security system. The then work and pensions secretary Iain Duncan Smith said at the time it would form part of:

the Government’s aim to move from a high tax, high welfare and low wage society to a low tax, lower welfare and higher wage society. This Bill lays the ground for that commitment and helps us to continue the job of reversing the Labour’s Government’s failure that led us into the difficulties we inherited.

Now, five years on, the All Party Parliamentary Group (APPG) for Health in All Policies has looked at the Act. It has analysed the effect it has had on social security claimants. And the APPG has also looked at how the 2016 changes have affected society overall. Its findings and conclusion are damning.

The act made numerous changes to social security. As the APPG’s report laid out, it:

In short, all these were effectively cuts or restrictions on the amount of money the DWP gave to claimants. Now, by combining lots of research, the APPG has reported on the vast impact the act has had.

The APPG looked at the act in the context of five areas. These were:

Then, its report compiled lots of evidence. This showed that the 2016 act has not done what the Tories claimed it would do. In fact, when you look at what has happened, it has really done the opposite.

After the Tories put the 2016 Act, and one from 2013, in place, The APPG report notes the following effects. Child poverty went up: 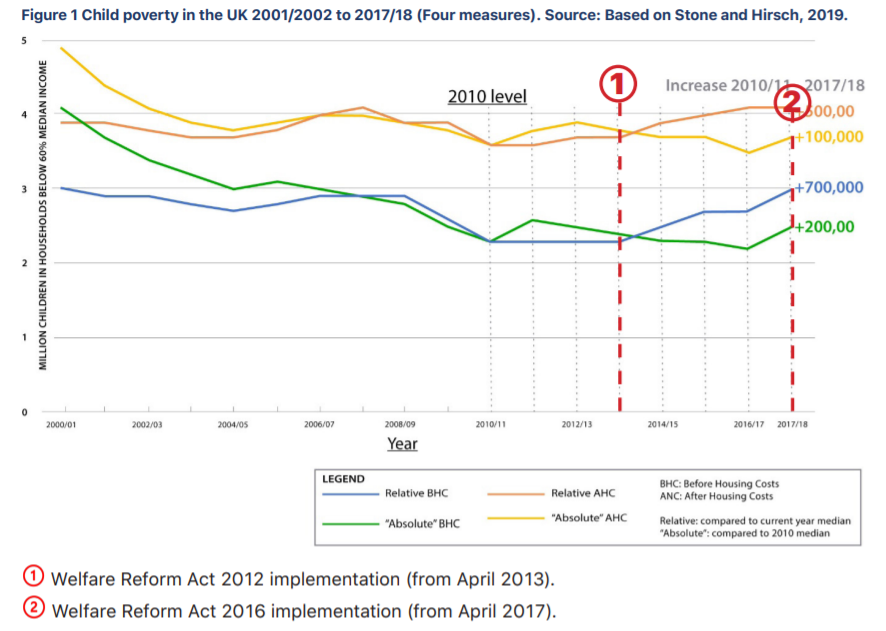 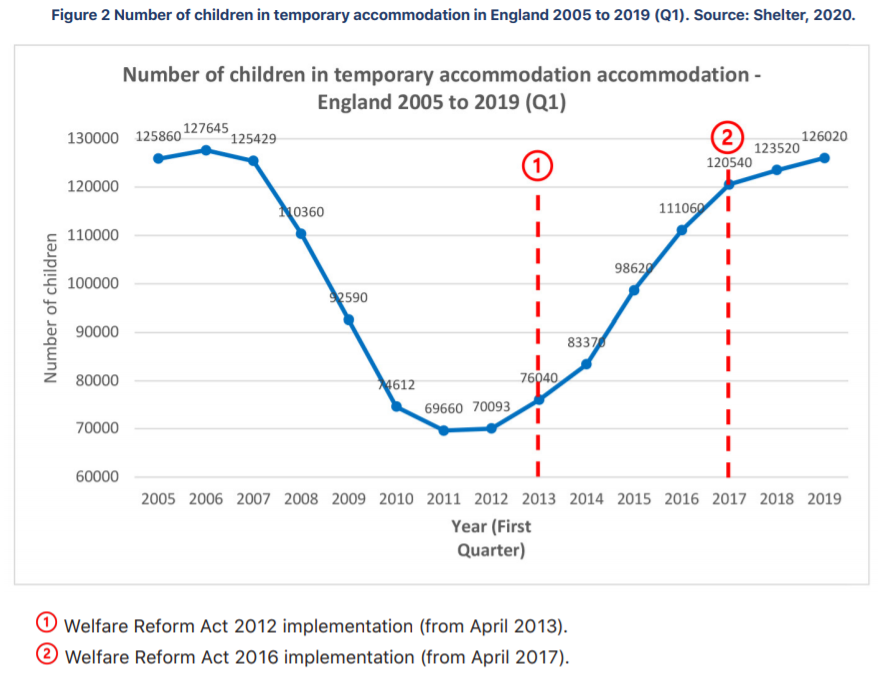 Trussell Trust foodbank use went up: 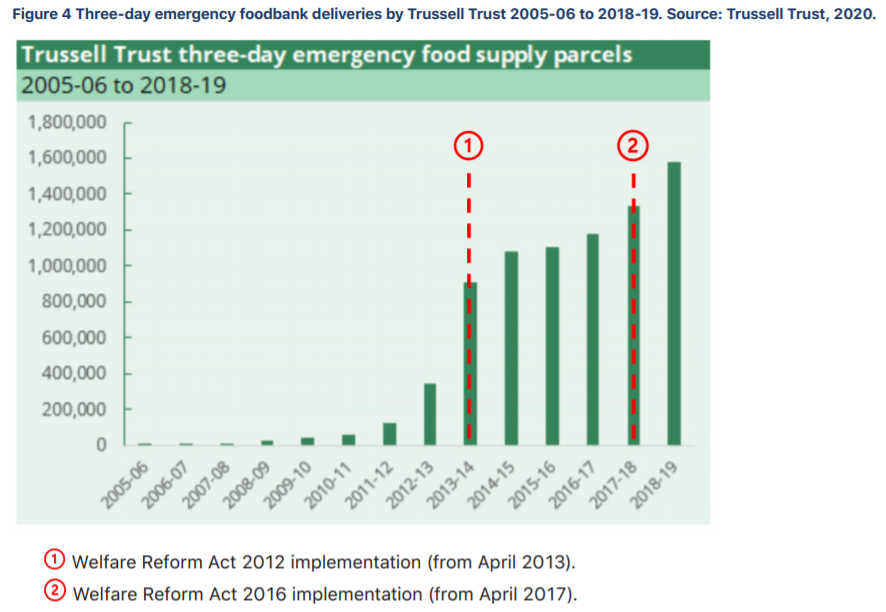 There was a rise in children on Free School Meals: 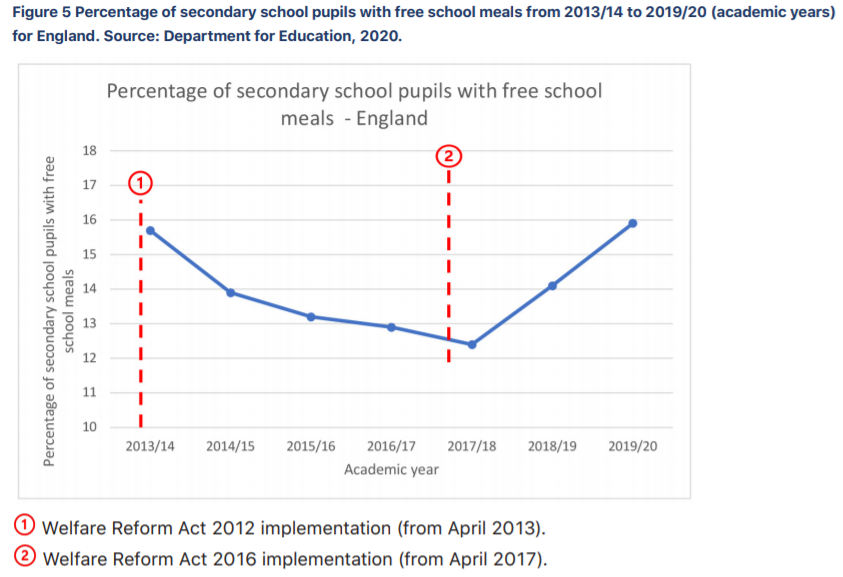 But it was the APPG’s analysis on welfare reform’s effects on people’s physical and mental health which made for the starkest reading.

Its research noted that: 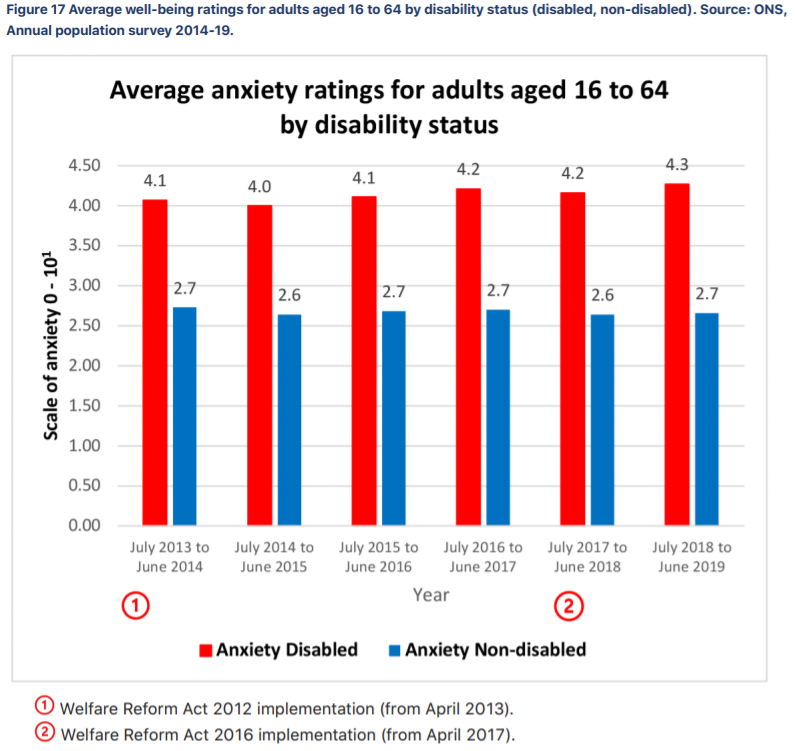 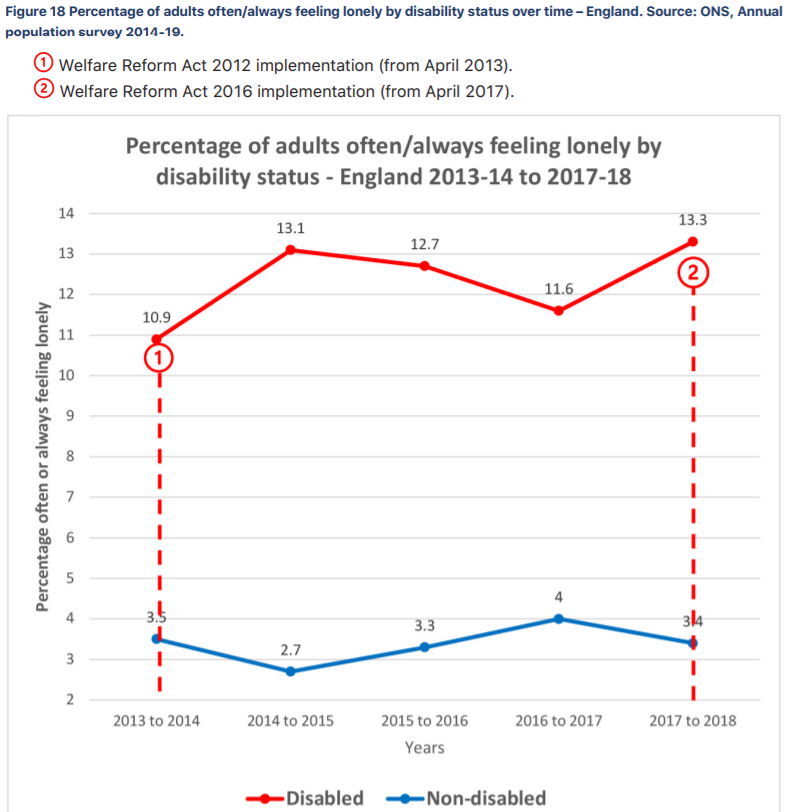 more than half of the 14 million people living in poverty have a disabled person in their household. Approximately 6.5 million disabled adults and children are living in poverty, with disabled working age adults having the highest rate (40%). Although physical disability rates have stayed the same over the last 5 years, mental health conditions have increased. Since 2012, there are an additional 1.6 million people with a severe mental health condition or mental disability.

Then, it cited 2017 research which said that negative health behaviours like smoking and not eating fresh fruit and vegetables were associated with increased poverty. More research showed that poor children:

were more likely to have socioemotional behavioural problems, cognitive disability and to be overweight or obese

The report also noted that:

Abrahams summed up by saying:

The impacts of this social security-driven poverty on the health and wellbeing on the population is profound. The United Kingdom is one of a few advanced economies where our life expectancy has flatlined since 2018, with poor areas seeing a decline. But the impact of this poverty on our children on their life chances but also on their longevity is shocking for the 5th richest country in the world. The evidence that for every 1% increase in child poverty there’s an extra 5.8 infant deaths per 100 000 live births shame us.

But then the pandemic hit. And as the report highlights, all of the problems the DWP created made this worse.

In early 2020, professor Michael Marmot released a report. It looked at the 10 years after The Marmot Review and looked at the health of society. Marmot found that:

In December last year, he added to his “call” on the government. This was because coronavirus had hit poorest communities the hardest. Marmot said that the causes of this were the:

In other words, things like the Welfare Reform and Work Act 2016 had directly led to people dying during the pandemic.

The ‘dehumanisation’ of claimants

Abrahams said in a statement that:

There is a growing evidence base of the direct and negative impacts of different aspects of the social security system on the mental and physical health of claimants and their families, in addition to the indirect impacts mediated by poverty as a result of having inadequate income from work and/or social security support.

In addition to quantitative evidence we looked at qualitative studies which pointed to a process of ‘dehumanising’ claimants that eroded their self-esteem and confidence, making them feel worthless. In some cases, the whole experience had proved too much for some claimants and they have taken their own lives.

It’s important to note the knock-on impact that this ill health will have on health services and for social protection to be recognised as mitigating against socio-economic health risk factors.

The APPG said it wanted the government to make 16 changes. These included:

But will the DWP and the Tories listen?

The Canary asked the DWP for comment. It said in response to the APPG report:

This Government has always been committed to supporting the most vulnerable and targeting support to those in greatest need, including boosting welfare support by billions and investing at least £2.3 billion of extra funding a year in mental health services by 2023/24.

The DWP also pointed The Canary to additional measures it has put in place. These included the £20 Universal Credit uplift which runs until the end of March, and additional investment in mental health services.

Money-saving at the expense of people’s lives

She said the 2016 act has literally done little else except save money:

Although the Government achieved their aim of cutting welfare spending by introducing these measures – working age spending on social security has shrunk by £34bn since 2010 – there has been minimal impact on helping to get people into work who wouldn’t have got into work without these measures.

In the short term, Abrahams said:

This is a clear warning to the Chancellor that, as a bare minimum, he must maintain the £20 Universal Credit uplift in his Budget this week to help alleviate some of the devastating damage caused by this act, and the ongoing effects Covid, on low income families who are already struggling to survive.

But it remains to be seen how UK social security will pan out in the long term. The number of Universal Credit claimants has doubled since the pandemic started. With around six million people now claiming, it’s likely the problems that the APPG highlighted will now affect even more people. And given its track record, it’s unlikely the Tory government will act to stop this.