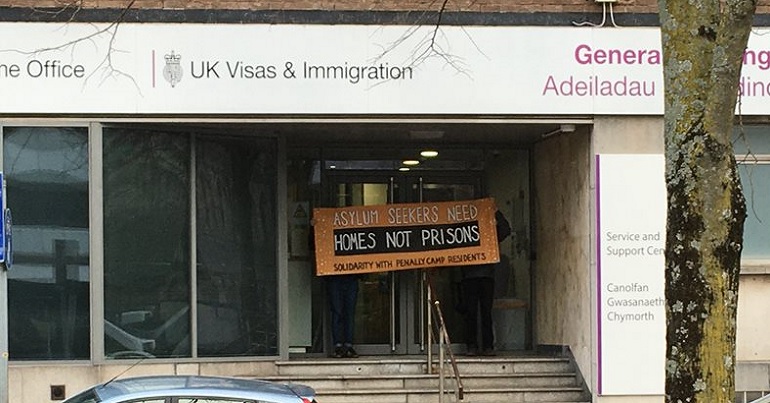 The Home Office has had the situation for refugees in the UK brought directly to its door. Because protesters have blockaded the entrance to one of its offices. It was over the appalling conditions in a Home Office-run refugee camp.

Hell on earth in Penally

As The Canary previously reported, in September 2020 the Home Office controversially began housing refugees at two disused army barracks in Kent and Wales. The latter is a facility at Penally, just outside Tenby on the Pembrokeshire coast. Penally has been leased from the Ministry of Defence by the Home Office, and could be used to house 250 people. At one point the Home Office was holding 150 people there.

People have protested about the Penally facility. And The Canary has reported on the appalling conditions in the camp. As Tom Anderson wrote:

Conditions at Penally are hellish. Camp residents complain of inadequate and poorly cooked food, no privacy, and inadequate shower and toilet facilities. They are unable to socially distance, or to take proper precautions to prevent the spread of coronavirus (Covid-19).

Residents told The Canary about conditions in the camp. They have to brave the outdoors to access the toilets; measures to prevent the spread of coronavirus are poor, and the camp is cramped. But now, people who have been campaigning against the forced housing of refugees in Penally have taken further action. 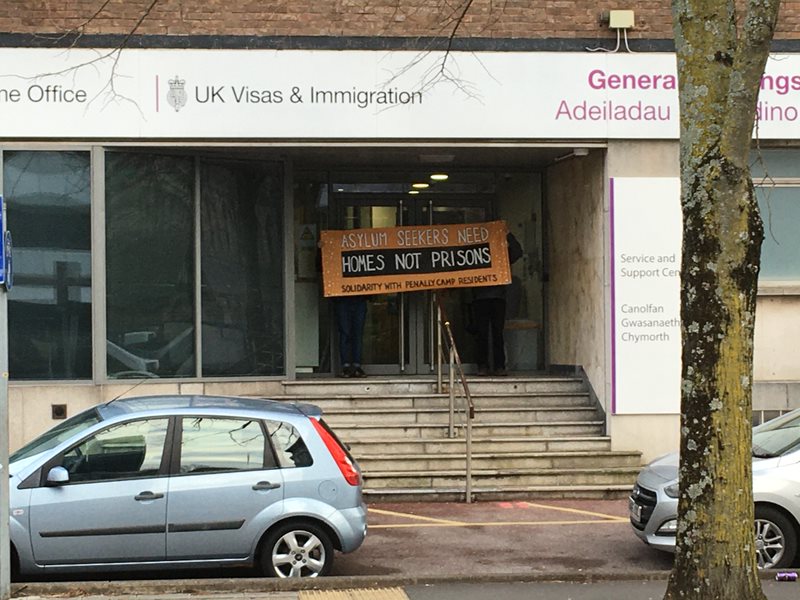 They said in a statement that:

The Home Office has a duty of care to all those who arrive in the UK seeking sanctuary. People staying in the Penally ex-military training camp, run by Clearsprings on behalf of the Government, are experiencing:

Lack of access to phones and internet, meaning they cannot communicate with family or legal support;

No provision of health or mental health services;

Inadequate provision of toilets and showers.

Wales has a proud culture of welcoming guests. These people seek only the opportunity to live a normal life and contribute to our society. This is being denied to them by the Home Office, which prefers to keep them in a state of purgatory, not knowing if and when they can begin to study, work and get on with their lives. This further compounds the trauma they have been trying to escape.

Penally Camp must be shut down immediately, and suitable accommodation and support provided to help new migrants integrate and become active citizens. Not to do this is a failure in the statutory duty on the part of the Home Office. This concept of using ex military camps to house refugees is a proven failure. No more camps!

But the story of Penally may not be coming to an end any time soon.

As Davis and Roberts said in a statement:

We now understand that, rather than reducing numbers and eventually closing the camp, as announced by Immigration Minister Chris Philps in January, the Home Office is sending even more refugees to this dysfunctional facility. Residents and volunteers risk prosecution under the Official Secrets Act for speaking out about the conditions.

It’s a damning indictment of the Tory government that it considers refugees’ lives so worthless it houses them in appalling facilities. In fact, as The Canary previously reported, there’s an outrageous reason why refugees are being forced to endure these appalling conditions. The Home Office is housing refugees in barracks because of concern about confidence in the asylum system with internal documents saying “the need to control immigration” justified the provision of “less generous” housing for refugees.

Yet perhaps more damning is that it intends to continue with this potential breach of human rights. It is heartening to see people showing love and solidarity for the residents of the camps. But more still needs to be done. And the drive to have these camps permanently shut needs to continue.