Liz Truss: a month in power and nothing to show for it but chaos 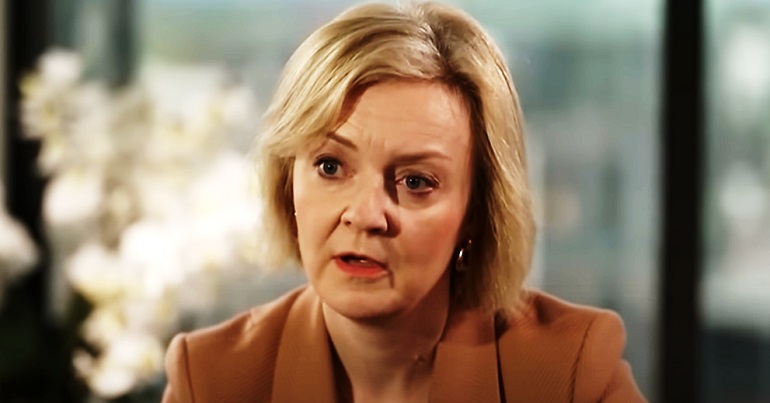 Just over a month has passed since the Tory party made Liz Truss prime minister. And, it’s been hell on earth for everyone involved – including her. She has lurched from one crisis to another as the UK falls apart. But how bad is it really? And what has gone on in the past month that you may have missed? The Canary takes a look at 31 days of the new PM – where she’s made Boris Johnson look like a genius.

The Tories installed Truss on 6 September. Now, as of the 7 October, the UK is facing pre-planned energy blackouts this winter, even after Truss said during the Tory leadership race that she wouldn’t let that happen. The National Grid has warned that due to capitalism’s fossil fuel crises, it may have to impose three-hour intentional power cuts on “pre-defined periods during a day”.  The news comes after Truss repeatedly lied about energy bills, saying her £2,500 ‘cap’ was the most households would pay – a claim groups like Full Fact repeatedly corrected. She even stopped the new king, Charles Windsor, going to the Cop27 climate summit – weaponising the climate and ecological crisis for her own, climate crisis-denial agenda when our planetary boundaries are collapsing and we’re in the midst of the Holocene (sixth) extinction event – which started at the end of the last ice age but has been turbocharged by human activity.

Under Truss’s leadership the state is already continuing the drift to far-right authoritarianism. Madeleine Budd could face 18 months in jail after pouring human faeces over a memorial to Tom Moore. She admitted criminal damage and a judge denied her bail. The sentence seems ridiculous – and as the Canary‘s Joe Glenton alluded to – if Budd had poured the faeces into a river she probably would have gotten away with it. Because under Truss water companies have continued to violate the environment by pumping raw sewage into our rivers and seas.

Truss has continued with the Tory policy of freeports – but upped the capitalism stakes by changing them to “investment zones” (onshore tax havens to the rest of us). This encapsulates her neoliberal approach to economic policy – with hers and chancellor Kwasi Kwarteng’s mini-budget nearly causing a financial catastrophe. After the Tories announced the package, the value of the pound collapsed, mortgage lenders pulled countless rates, and the Bank of England had to step in to save pension funds. But that wasn’t the end of it, even after Truss’s now-infamous U-turn. By Thursday 6 October the pound sunk again against the dollar after a credit rating agency warned of further problems with the UK economy.

All this is without Truss’s other potential policies which could have disastrous consequences for the poorest people. As the Canary previously reported, her government is planning to cut social security in real-terms next April. Johnson’s government had already indicated it would increase benefits by around 10%. Now, Truss wants to change how April 2023’s rise is worked out – and track it to pay rises. This would mean social security would only go up by around 5.4% – which is a real-terms cut. Think tank the Resolution Foundation says this would mean households could see up to £500 a year wiped-off their incomes. This is on top of years of real-terms cuts Tory governments have already meted out.

Director of campaign group Global Justice Now Nick Dearden summed the situation up. He wrote for Al Jazeera that:

It might be hard for those outside Britain to believe we now have a worse government than that of Johnson. But we do. Johnson was deceitful, venal and incompetent but, in his desire to stay in power, he spent money. He knew it was popular. In fact, it was this lack of adherence to free market principles, as much as the shambolic nature of his government, that turned the Conservative Party membership against him.

Dearden makes an interesting point. Previous Tory leaders were not neoliberal in the true sense of the word. David Cameron’s brand of capitalism was very much a globalist corporatism – where companies hold power over government, and the government therefore acts in their interests. Looking back, there was unease at this at the time from those that are now closest to Truss’s administration. For example, controversial think tank the Institute for Economic Affairs (IEA) criticised Cameron’s MO in 2011  – comparing him to Ted Heath and even Tony Benn. Theresa May then took a more moderate line of capitalism.

But Johnson trashed all of this, as Dearden noted – and now we see the free market ideologues in charge. Truss’s agenda is in many ways more extreme than Johnson’s. Because even he realised shrinking the state and slashing public spending during a socioeconomic crisis was far-right conservatism too far. Of course, the current so-called cost of living crisis is now affecting the middle classes, hence the uproar. But even angering ‘Middle England‘ hasn’t discouraged Truss. After all, her ideology is so extreme that the middle classes are expendable, too.

This will not end well. Truss has infuriated mainstream corporate capitalists – to the point where even the nation-destroying International Monetary Fund (IMF) sounds moderately reasonable. Her economic policies are classism on steroids – designed to create a society of the dazzlingly rich versus the destitute, disposable poor, with everyone else in between simply ‘getting by’. Truss will be a disaster – and make Johnson look positively reasonable. Make no mistake, though – contrary to some opinions, she is not “incompetent“. Because if you look at her approach to economics – and therefore by default her approach to social security, the climate crisis, and criminal justice – it reveals what actually drives her to make decisions which seem ludicrous to most people.

Her unfettered free market neoliberalism is ideological. Truss is a conservative who’s socially authoritarian, but her economics are that of libertarianism, by all accounts. She believes society should be free to do what it wants; people can get as rich as they desire – but only if she approves of their views. This of course includes a disdain for poor and marginalised people – because under Truss’s worldview it’s their fault they’re that way. The problem she’s faced is that this ideology is too extreme for the system (hence interventions from the likes of the IMF). Its proponents rely on the system seeming “human” or “inclusive” to get buy-in from most of the population. And Truss’s brand of worldview is neither of these things.

The Financial Times posited that the Tories were now the most economically right-wing political party in the so-called “developed world”. So, like we saw with Jeremy Corbyn’s Labour on the other end of the political spectrum, the system will attempt to crush Truss, too – hence her breakneck speed U-turn on tax cuts for the rich. She’s too neoliberal even for corporate capitalists.

No-one is coming to save us

Of course, the obvious problem with all of this is that no-one is coming to save us. Labour is dead; the SNP will evacuate the United Kingdom as soon as it can, and the Green party are still on the fringes. Even with Labour’s current polling, under our system, the party may still not win a majority – due to boundary changes that favour the Tories and the SNP’s strength in Scotland. And if they did, Keir Starmer’s brand of politics would still be a disaster for us all.

After just a month in charge, Truss has shown the hell that is facing most of us. So, the fight against both her and the system has to continue from our communities and organisations – it just needs stepping up several more gears, now.