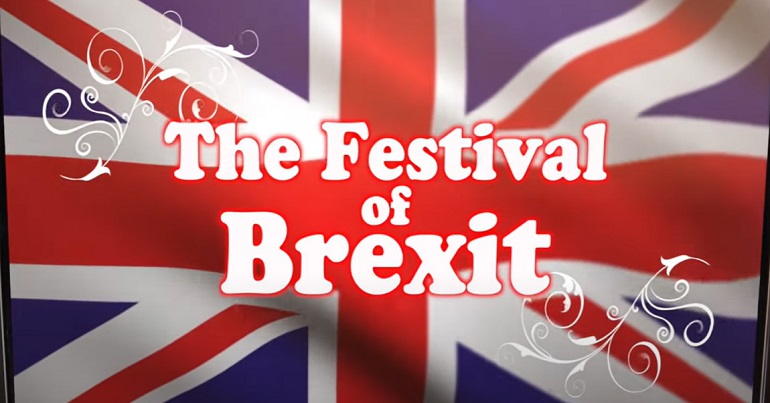 The so-called ‘Festival of Brexit’ was an unmitigated disaster according to new attendance figures. Just over 4% of the total number of people the organisers thought would attend, did – showing that essentially, most people really didn’t give a shit about celebrating everything that the Tories claim is great about post-EU Britain.

As Agence France-Presse (AFP) reported, the UK government-funded “Unboxed” festival to celebrate creativity after Brexit had fewer than three million visitors in eight months. Figures show that 2.8 million people attended UK-wide live events, well short of the 66 million projected by organisers – that’s around 4.2% of the total they hoped for. Unboxed has always denied any link to the UK’s divisive exit from the EU. The ‘Festival of Brexit’ name stuck after antiquated MP Jacob Rees-Mogg called it that.

The government gave the festival £120m in funding. Its free events included a disused oilrig turned into an art installation. However, executive director of the project, Phil Batty, has defended the festival. As BBC News reported, he said the Festival of Brexit has:

been able to create joyful memories for millions of people in communities across the UK.

Organisers said the total audience was 18 million, including 13.5 million who watched events online and on television, and 1.7 million who took part in youth activities. However, this hasn’t been enough to stop politicians asking questions.

The National Audit Office, the UK’s independent public spending watchdog, announced last month that it would compile a report into the costs and benefits of the project. Its report is due to come out in the next few weeks. It was ordered after Conservative MP Julian Knight – chair of parliament’s committee for digital, culture, media and sport – condemned the festival as “an unadulterated shambles”. Oddly, this shambles was not dissimilar to the Tories’ Brexit itself – which MPs like Rees-Mogg wanted Unboxed to celebrate.

For example, as Byline Times reported, one of the biggest negative impacts of Tory-defined Brexit has been on trade. It noted that:

Then, Byline Times also reported on how Brexit is also making the UK’s cost of living crisis worse:

Fifty-six per cent of Brits have recently experienced food shortages on the shop shelves, according to a 2021 YouGov poll, compared to less than 18% among all other Western European countries.

Moreover, recent polling shows 56% of people also think Brexit was the wrong decision – or maybe it was the mess the Tories made of it that’s the problem. Either way, the Festival of Brexit clearly didn’t ignite the public’s interest – and rightly so. The Tory white elephant was less about a festival and more about a cock-eyed PR stunt to shore up the idea Brexit would make the UK a colonial-era ‘Great Britain’ again.

It serves them right that it was such a disaster – but as always, the public has to foot the bill for the Tories’ vanity projects.