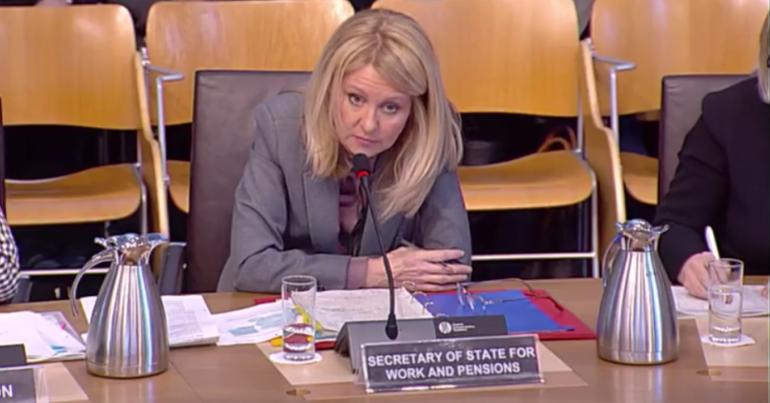 A Scottish parliament session was suspended twice on 16 April as anger over Department for Work and Pensions (DWP) policy boiled over.

In a tense session of the Social Security Committee at Holyrood, MSPs grilled secretary of state for work and pensions Esther McVey. They pushed the DWP chief on issues ranging from the so-called ‘rape clause’ to the roll-out of Universal Credit.

Anger from the public gallery caused the session to be disrupted on two occasions. Convener Claire Adamson decided to suspend the meeting both times.

One member of the gallery stormed out of the session, shouting at McVey as she left. The committee was brought to a close shortly after.

‘Due an apology from the DWP’

At the meeting of the Social Security Committee, SNP MSP Ben Macpherson called the current Universal Credit system “cynical” and “critical”. Asking if McVey would rethink the policy, the MSP added:

I want to give you the opportunity to apologise to the people behind you, the people across my constituency and the people across Scotland, who’ve suffered greatly through the mistakes of social security reform… and I think are due that apology from the DWP, for the suffering and distress that’s been caused to them.

McVey responded by saying that the aim of Universal Credit is that it is a “supportive system”. But angry members of the public soon shouted her down. This led to the first suspension of the sitting.

Scottish Greens MSP Alison Johnstone, meanwhile, raised issues around the so-called ‘rape clause’. The welfare reforms mean that tax credits are capped at two children. If a woman has a third child as a result of rape, they would have to provide evidence to receive credits.

Johnstone highlighted opposition to the policy by groups such as Scottish Women’s Aid and Rape Crisis Scotland. She went on to ask:

Do you as a minister really… you actually are comfortable with the idea that a woman has to prove non-consensual conception in order to access an entitlement?

McVey claimed that the government was providing “double support” through the changes. But Johnstone said the changes could be “incredibly invasive and upsetting” for women.

The DWP minister disputed the accusations, before a member of the public gallery interrupted. The woman stormed out the committee meeting, shouting angrily towards McVey.

Scottish first minister Nicola Sturgeon has spoken out strongly against the system in the past. The SNP leader called the changes “disgusting”.

Scottish Conservative leader Ruth Davidson has claimed the SNP is spreading “misinformation” about the changes.