No-deal Brexit could cause ‘fatal’ medicine shortages, according to health union leaders - Canary 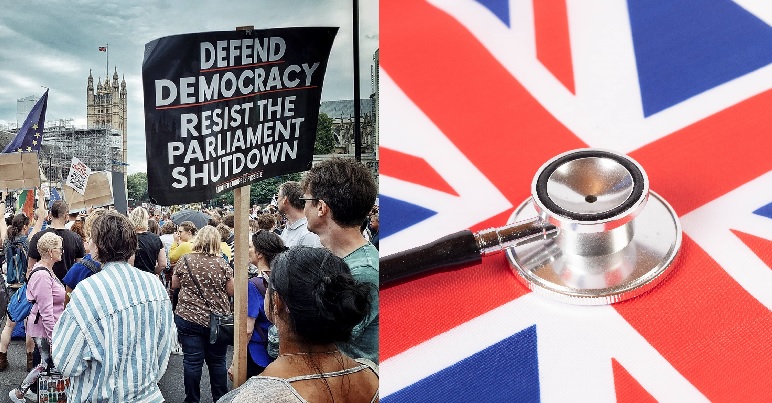 A joint statement from 11 medical bodies and unions has appealed to the government to reject a no-deal Brexit. The statement follows prime minister Boris Johnson’s move to suspend parliament ahead of the EU exit date on 31 October.

Signatories include members of the British Medical Association (BMA), the Royal College of Nursing, Royal College of Midwives, GMB Union, Unite, and Unison. It warns that medicine shortages as a result of a no-deal could be ‘fatal’:

Many medicines, including life-saving agents for cancer diagnosis and therapy, cannot be stockpiled and, for those that can, stockpiles could run out.

These kinds of shortages and delays can be fatal. No responsible government should take that risk.

The statement also highlighted the economic impact a no-deal Brexit would have on the NHS:

Treasury assessments show that a no-deal scenario would shrink our economy by £90bn, reducing the money available for the NHS…

With waiting times rising, operations being cancelled and yet another winter crisis looming, the health service cannot weather a long-term economic shock.

Earlier in August, the heads of 17 health charities and colleges sent a letter to the PM highlighting the impact of a no-deal Brexit on patients. In it, they appealed to the PM to “put patient safety and protecting the nation’s health at the heart of Brexit negotiations”.

In response to the recent proroguing of parliament, Dr Chaand Nagpaul, council chair of BMA, has warned against the dangers of a no-deal Brexit. He told the Independent:

From our invaluable EU workforce to the supply of vital medicines… there is practically no area of health that will be unaffected if we crash out without a deal.

A government document recently leaked to the media revealed emergency planning in the case of medicine shortages. Meanwhile, a spokesperson from the Department of Health and Social Care has said:

We are taking all appropriate steps, meaning our plans should ensure the supply of medicines and medical products remains uninterrupted when we leave the EU.

And a no-deal Brexit also threatens the supply of the flu vaccine.  The Canary recently reported how medicine shortages are already starting to affect patients. So with winter approaching, shortage of the flu vaccine is likely to increase strain on the NHS.