UK to include trans people in conversion therapy ban - Canary 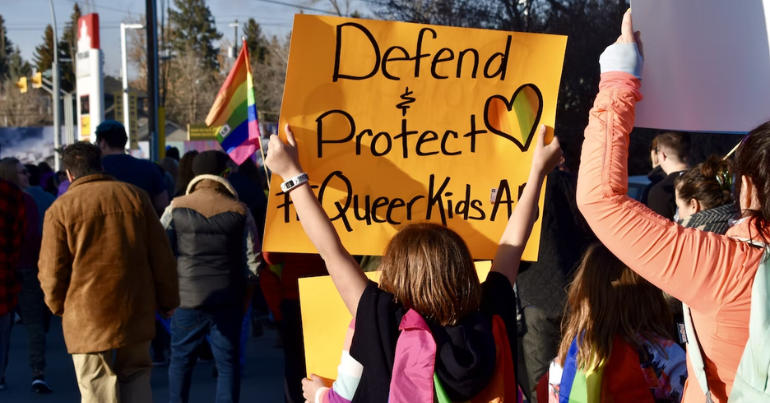 The U-turn move was welcomed by gay lawmakers and LGBTQ+ groups. It comes after the government has long stalled on passing such legislation and sought to exclude transgender people.

Culture minister Michelle Donelan said she will publish a draft bill banning conversion therapy in England and Wales soon. Although she failed to specify a date, she stated that it:

will protect everyone, including those targeted on the basis of their sexuality, or being transgender.

However, she added the proviso that the legislation should not prevent parents or clinicians having “legitimate conversations” about “gender-related distress” among children or young adults.

This ambivalence was reflected by the notably anti-LGBTQ+ equalities minister, Kemi Badenoch. The Telegraph was quick to report that:

The equalities minister is to write to all Tory MPs to insist that a ban on trans conversion therapy must not criminalise parents, as a backlash against the plans grew.

In a highly unusual move, it is understood that Kemi Badenoch intends to set out her concerns over the proposed legislation, announced in the Commons on Tuesday.

She will warn that legitimate conversations between parents and trans children must not be outlawed and that freedom of religion must be protected.

The announcement came as the UK government is using its powers to block a bill passed in the Scottish parliament that makes it easier for people to self-identify as transgender. Some commentators have suggested that the announcement was an attempt to deflect attention.

Conversion therapy is an umbrella term for interventions to change a person’s sexual orientation or gender identity. There have long been calls to ban the practice. In fact, it was outlawed by the UK’s main associations of psychologists and psychiatrists in 2015 as “unethical and potentially harmful”.

Activists welcomed the government announcement while saying it was long overdue. Stonewall, for instance, commented that:

We have faced almost five years of delays and broken promises. The UK Gov must publish the Bill and an imminent timetable ASAP.

The UK government presented a bill in 2021 that proposed a jail term of up to five years for those who carry out conversion therapies on minors. However, it did not penalise adults deemed to have freely consented.

In March last year, the government said it had dropped plans for a ban. It then swiftly reversed course and promised to implement a version of the draft law.

As the Canary reported in April of the same year:

In May, the government said it would bring forward a ban. This came in response to an online petition specifically about the inclusion of transgender people.

For now, it remains to be seen how the ban will be applied if – as Badenoch seems set to request – it does not criminalise parents who attempt to put their children through conversion therapy.