What’s the answer to the Syrian crisis? - Canary 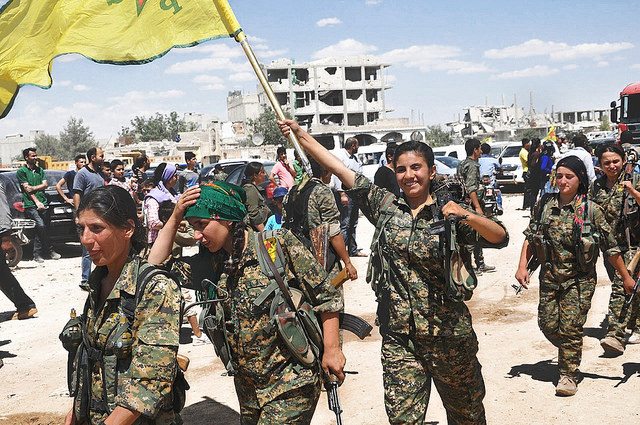 The Syrian civil war has seen more than 330,000 people killed and 13 million displaced, according to The Syrian Observatory for Human Rights. It is undeniable that something must be done to stop the death and destruction that is sweeping across Syria. It is a hugely complex civil war, but whenever a potential solution is proposed, that solution also raises significant cause for concern.

Some experts, such as Emile Hokayem, propose strengthening the moderate opposition forces in Syria. These forces would be required to take on the malevolence of the Assad regime and jihadist groups like ISIS. The proponents of this policy believe that there is a significant middle-ground which needs to be included, engaged in discussions and armed. However, Western backed groups like the Free Syrian Army (FSA) have huge internal divisions and have been accused of grotesque crimes. This shows that even if they were successful, they may not provide the stable, or humane governance that is hoped for. Moreover, with the removal of Assad a power vacuum would emerge that the Islamic State is likely to fill. Can any moderate militias take on both Assad and Isis?  Western intervention in the region has failed since before the War on Terror began. Afghanistan, Iraq and Libya are all examples of what may happen if the West is dragged further into this conflict.

Others, like Patrick Cockburn, suggest that the West should work with Russia in co-opting Assad to ensure that his regime remains as it is for a transitional period. This will ensure that jihadist groups are defeated and Syria may see some stability. Alexander Nekrassov, a former Kremlin adviser said it was the “unpleasant truth” that Assad is “lesser of two evils compared with ISIL”. Ammar Waqqaf, Syrian political analyst argues “two out of three refugees, who fled the fighting areas in Syria, headed for the government-controlled areas, while the other third went to neighbouring countries.” However, doing this enables Assad’s regime to remain intact after it has committed odious crimes against humanity. According to some, Assad encouraged Islamists factions so that he could frame the civil-war as “good regime vs evil terrorists”. Another problem with Russia’s involvement is that it has been targeting non-Isis opposition groups. Western regimes fear that they are bombing the moderate opposition groups.

Samer Abboud, Associate Professor at the University of Arcadia’s Department of International Studies, believes Syria is a “conglomeration of micro-conflicts” and that peace is likely to only come about by strategies at local levels. Therefore, talk of removing, or keeping Assad is redundant- the war has gone beyond that stage. This appears to be the case when considering Rojava. An autonomous region that has largely remained independent and democratic in the midst of a civil war. The Democratic Union Party (PYD), is in alliance with Turkey’s Kurdistan Workers’ Party (PKK). For Rojava, a solution would be recognition and legitimacy from the international community; this is likely to upset Turkey, in addition to the Iraqi and Syrian states. Turkey has been focusing its efforts on stopping Kurdish forces and would not respond well to Western allies recognizing Rojava.

It is undeniable that something must be done – the answers are far less obvious.