More spin from privately schooled Education Secretary, as students take to the streets - The Canary 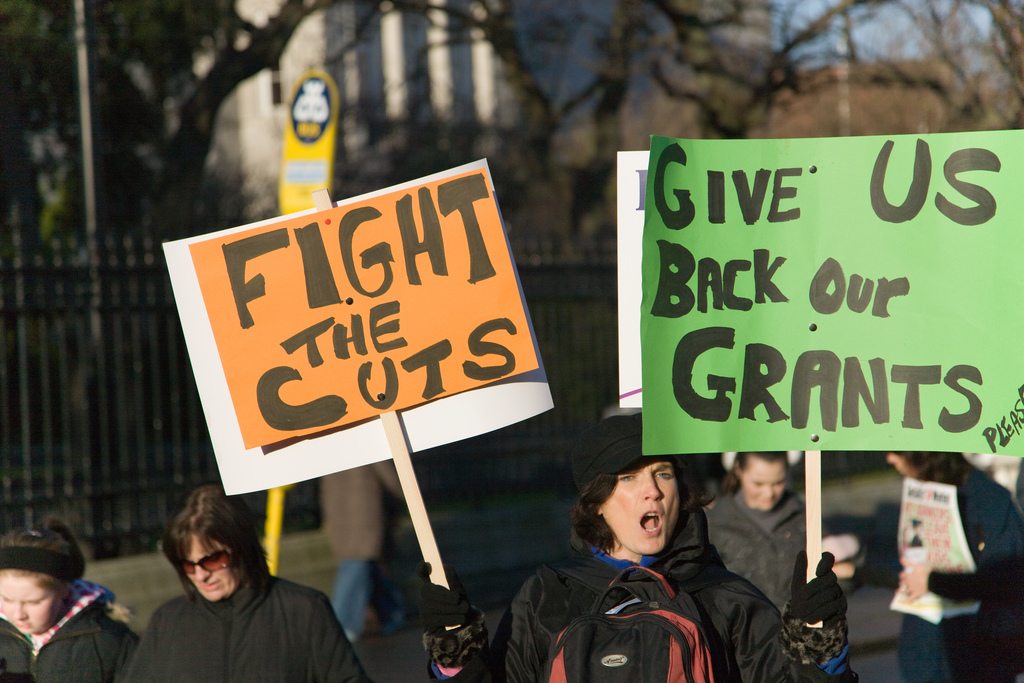 Yesterday’s march in London, organised by the National Campaign Against Fees and Cuts, was in protest against further government plans to cut maintenance grants for the poorest students. University course fees and living costs have resulted in higher education in the UK becoming considerably more of a privilege than a right.

Marching under the banner FREE EDUCATION – NO BARRIERS, NO BORDERS, NO BUSINESS, the protest was in response to government proposals to abolish maintenance grants, planning instead to turn them into ever increasing debts in the form of student loans.

The protest was backed by the National Union of Students (NUS) with students and representatives from over forty campuses expected to attend. It was also personally endorsed and promoted by Jeremy Corbyn, who wrote a personal statement to be read out at the beginning of the rally.

According the The Independent,

As well as calling for free education, the group added how the march will also highlight the rights of migrants and international students who face ‘increasing and constant surveillance and intimidation, as well as financial exploitation’.

It came the day after Education Secretary, Nicky Morgan, delivered an outline of her government’s education vision to present the snappily-named, but vacuous, 3 Es – educational excellence everywhere.

In this she speaks mainly about compulsory school education, criticising the “tacit snobbery” of former Labour politicians, adding:

Nothing exposes that snobbery more than the fact that these politicians and policymakers were never thinking about their own children.

She was undoubtedly sniping at the duality of the likes of Tony Blair when she said:

They made sure their children would study key academic subjects, which they told everyone else weren’t essential.

She also called many of the courses studied:

Her audience from the right-wing Policy Exchange think-tank filled the hall, causing the Secretary of State to comment glibly that she was flattered that the capacity made the conference hall almost more crowded than a Jeremy Corbyn rally.

These accusations of “tacit snobbery” referring to the object of her criticisms, i.e. Blairite Labour, could be interpreted as an attempt to continue to create an illusion of nothing having changed with the Labour Party. In doing so, she may be deluded enough to think that her words will undermine the revived activism of the Labour Party, with the huge upsurge in Labour Party members prior to and immediately following Jeremy Corbyn’s election as party leader.

Morgan chose not to mention Margaret Thatcher’s Education Reform Act in the 80s which greased the downward slide of excellent centres of academic and vocational training towards competition with other universities and higher education providers, sowing the seeds of what Morgan described as “pseudo-qualifications”.

Nor did she mention her own inherited privilege of a private school education followed by a law degree at Oxford. No doubt the standing room only was largely occupied by the similarly silver-spooned brigade.

Moreover, the day before a march about spending cuts and the burden of debt attached to gaining a university degree, reference to higher education was noticeable only by its absence.

With government policy limiting access to higher education unless students accept an eternal debt burden, she simply opted  for criticising former opposition politicians, proffering elegant but meaningless words. She is not addressing the real issues.

However, it is encouraging to hear her acknowledgement of Jeremy Corbyn’s popularity, and it would serve her well to listen to his views on education. His commitment to education for all is embedded in his policy, not in arrogant, patronising words. As he says at the end of his rally call:

Education is a right, not a privilege.

For more information see the National Campaign Against Fees and Cuts