Theresa May finally gives straight answers at PMQs, but she accidentally reveals too much [VIDEO] - Canary 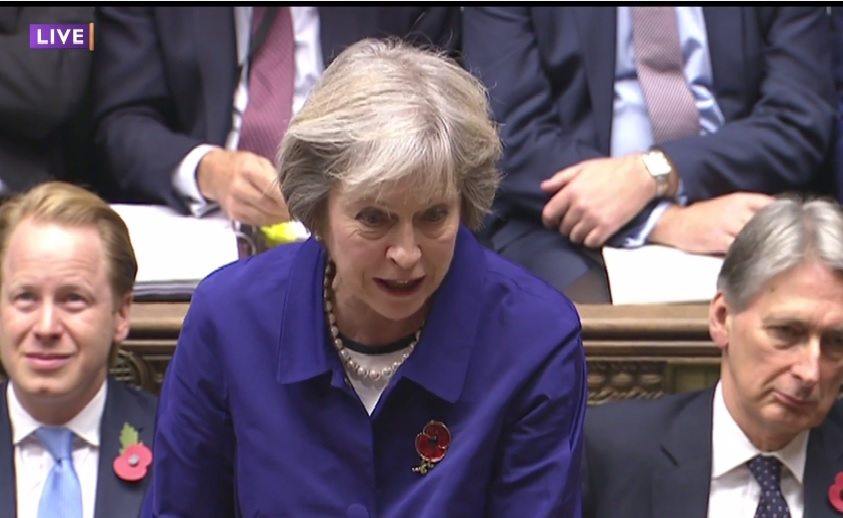 Theresa May’s performance at the last Prime Minister’s Questions (PMQs) saw her accused of being incomprehensible. But her answers at the most recent session on 2 November were crystal clear.

And they showed exactly how merciless the new Prime Minister is.

Labour leader Jeremy Corbyn began his questioning at the weekly session by reminding May of her promise to “stand up for families who are just managing to get by”, made when she first became Prime Minister. He claimed this promise has been shown as “empty” by the government’s plan to cut Universal Credit.

He also noted that recent research by Oxford University showed that the sanctions inflicted on benefit claimants have a direct link to food bank use. And that one million people used food banks last year, compared to 40,000 in 2010.

To these points, May responded that her party is determined to create a welfare system that will ‘make work pay’. And one that is fair for all, including “those who pay for the benefits through their taxes”. She also insisted that:

So according to that logic, May believes those one million foodbank recipients ‘rightly’ didn’t deserve the sort of support that would enable them to eat.

Death shouldn’t get in the way of ‘fairness’

Corbyn then confronted May with findings from Sheffield Hallam University. Researchers found that one in five claimants who had faced sanctions were made homeless as a consequence.

The Labour leader recommended the Prime Minister watch Ken Loach’s I, Daniel Blake, noting that the Work and Pensions Secretary had branded the film “monstrously unfair”. He added:

But I’ll tell the Prime Minister what’s ‘monstrously unfair’. Ex-servicemen like David Clapson dying without food in his home, due to the government’s sanctions regime. It is time we ended this institutionalised barbarity against often very vulnerable people.

May accepted the importance of support to those who “need” it. But her refusal to acknowledge that Clapson was one of those in ‘need’ suggested she believed he didn’t qualify. And her repetition of the importance that taxpayers “feel the system is fair to them” bolstered that conclusion. Because, as May herself has proved, when she feels strongly there has been an ‘injustice’, she condemns it.

Corbyn concluded his questions with one about the death of children. He acknowledged Swansea East’s MP Caroline Harris for her recent revelation about the death of her child. Harris lost her son at eight years old, and she struggled to afford the burial charges. Her son’s death happened in 1989, and she was elected to parliament last year. Corbyn said:

The Prime Minister may be aware that The Sunday Mirror, with the support of the Labour Party, are calling for an end to council charges for the cost to parents of laying a child to rest. It would cost 10 million pounds a year, a very small proportion of total government expenditure… I hope the Prime Minister could be able to consider this and act accordingly.

There are, of course, facilities available through the social fund funeral expenses payment scheme, for payments to be made available to people who qualify and meet those eligibility conditions.

We are, of course, making sure in relation to local authorities that they now have the extra revenues available to them through business rates, and other local revenues. It is up to councils to consider what they wish to do in this.

She did acknowledge the ‘difficulty’ for parents facing “the tragedy of losing a child”. But the answer to Corbyn’s question was a clear and resounding no.

This PMQs was illuminating. Because May was more forthcoming in her responses, we got a glimpse inside the Conservative government’s mind. And my, it is cold in there. It believes that those who can’t afford to eat are not desperate enough to be helped by the state. It thinks the benefits sanctions regime it has created, and the ‘fairness’ that regime represents in its ideology, is more important than the people it leaves in it wake.

And most extraordinary, it imagines that is what people ‘want’. If starvation, homelessness, insensitivity and unnecessary death are qualities the British people consider ‘fair’, then we have reached a tragic place indeed.

– If you think the government should help bereaved parents, sign Labour’s petition.