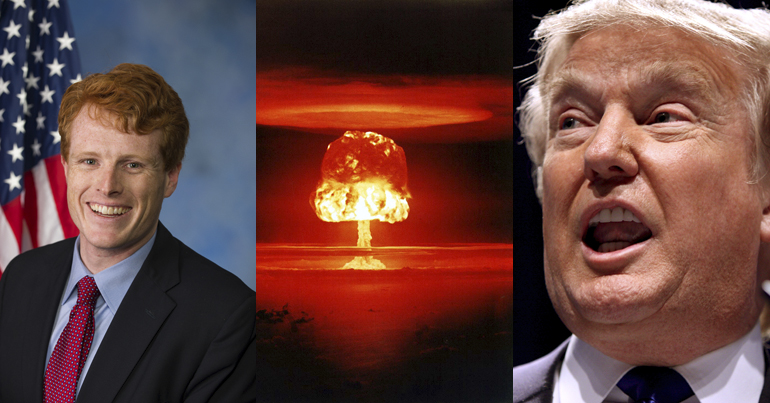 To err is to be human, now and then we all make mistakes. I once put milk in the cupboard instead of the fridge. And, US Democrat congressman Joe Kennedy III ‘accidentally’ voted in favour of giving Donald Trump greater access to nuclear weapons.

Kennedy admitted this on Twitter on 8 June, when someone called him out for voting with the Republicans.

You’re right. Meant to vote yes — it was an honest mistake on my part. There is no need for these weapons. Keep up your advocacy @SPMiles42.

The vote Kennedy was referring to was for an amendment to the National Defense Authorization Act (NDAA). The NDAA is a yearly bill used to determine and allocate funding for the United States Department of Defense. As it’s often approved by politicians in both parties, in recent years it has been used to push through controversial provisions.

Democratic Congresswoman Barbara Lee had put forward an amendment on 7 June to limit submarine-launched low-yield nuclear weapons. The amendment was voted down by 241 votes to 177.

Watch the debate on my amendment to stop Donald Trump from arming US submarines with a low yield nuclear weapons. Congress should be promoting peace and diplomacy, not making it easier for President Trump to provoke nuclear war. pic.twitter.com/0M1bMvwqGd

On one hand, it’s refreshing to see this level of honesty from a politician. However, Kennedy’s apology isn’t much comfort considering the potential ramifications of this bill.

The bill allows for the further funding and development of so-called low-yield nuclear weapons. These weapons have less explosive power than regular nukes. But some have questioned the term “low-yield” as it downplays the destructive capabilities of these weapons. A typical low-yield nuclear weapon is said to be the equivalent of the bombs the US dropped on Hiroshima and Nagasaki in 1945.

There are also concerns that the further use of these weapons could reignite the nuclear arms race. And some argue that the lower explosive power of the weapons could encourage their use and increase the likelihood of nuclear conflict.

There is never a good time to enhance the availability and capacity of nuclear weapons. However, with someone as unpredictable as Donald Trump in control of the nuclear trigger, this development couldn’t come at a worse time.

Kennedy’s mistake is a perfect argument against the proliferation of nuclear weapons. That mistakes do happen is the very reason why access to these weapons should be limited, not expanded.

– Support the Stop The War Coalition.

– Support the Campaign for Nuclear Disarmament