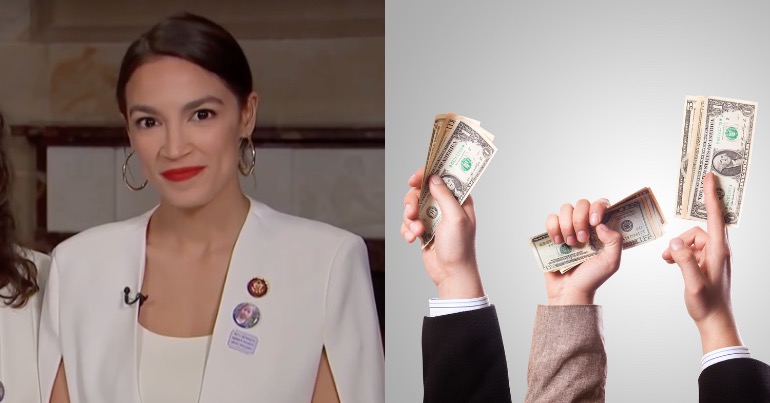 But this time she went straight for the belly of the beast: corporate money’s incestuous relationship with politicians. Her conclusion was simple and damning:

We have a system that is fundamentally broken.

Ocasio-Cortez played a “corruption game” in Congress. She posed a series of questions as a hypothetical “bad guy” to show the links between corporate money and politics. Ocasio-Cortez established that there was “nothing to stop” a political campaign being funded entirely by “the fossil fuel industry, the healthcare industry, pharma”.

The last thing I want to do is get rich with as little work as possible…so is there anything preventing me from holding stocks say in an oil or gas company and then writing laws to deregulate that industry…that could potentially cause the stock value to soar?

The answer was no.

You can see her epic full performance below:

‘We have a system that is fundamentally broken.’ — Rep. @AOC is explaining just how f*cked campaign finance laws really are pic.twitter.com/7rRXf9pD6Z

So, as Ocasio-Cortez established, it’s perfectly legal to personally invest in industries and then pass laws that benefit both yourself and the business itself. All this in the often self-described greatest democracy on earth.

Ocasio-Cortez also referenced a “really, really bad guy” with “skeletons in my closet that I need to cover up so that I can get elected” – which was arguably a thinly veiled reference to Donald Trump. She further spoke about “green lights for hush money” to pay off women  – something which Trump did via his ex-lawyer Michael Cohen during the 2016 presidential campaign.

She also said that as a member of Congress:

However, Ocasio-Cortez’s testimony shouldn’t be a revelation. According to a 2015 New York Times poll, 84% of the American public believe that money has too much influence over American politics; 39% want “fundamental changes” to the existing political campaign funding system; and another 46% want it totally rebuilt.

Corporate money flowing into Washington became easier after an American Supreme Court decision in 2012. As The Center for Public Integrity described, the decision meant that:

it is OK for corporations and labor unions to spend as much as they want to convince people to vote for or against a candidate.

And according to the Center for Responsive Politics, this decision subsequently “spawned the creation of super PACs“. These are organisations that can combine political campaign contributions from members, including corporations. The consequence was that:

these groups spent more than $800 million in the 2012 election cycle. It also triggered a boom in political activity by tax-exempt ‘dark money’ organizations that don’t have to disclose their donors.

The irony of Ocasio-Cortez’s explosive testimony is that money’s control of politics often blocks politicians with her views from office. This is because they can be starved of the funds needed to get elected, or censor themselves through fear of expressing such beliefs in the first place.

But Ocasio-Cortez’s election demonstrates that grassroots activism and social media are levelling the playing field.