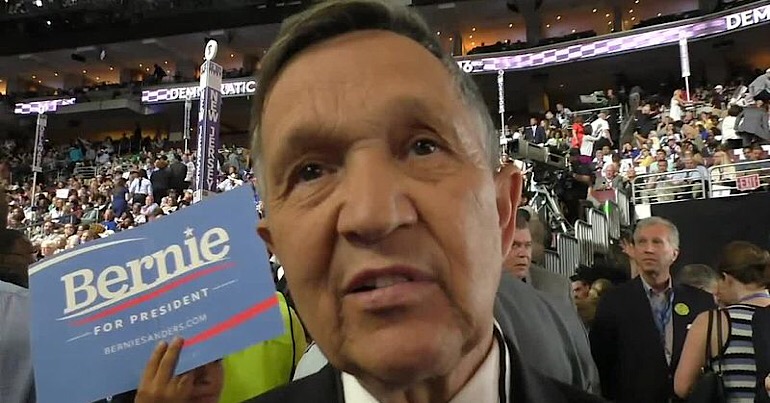 After two crushing progressive defeats in Democratic primaries in Ohio and West Virginia, ‘centrist’ Democrats have renewed their attacks on left-wing challengers as unelectable. But lost in the debate is the huge role money plays in making these ‘Democratic’ contests quite undemocratic.

The results: Cordray over Kucinich by a 40-point margin. A clear and fair win for establishment Democratic politics, right?

Not so fast. Cordray spent a whopping $1.72m on the race. Kucinich, on the other hand, spent just $317,000. Cordray’s total fundraising haul of around $3.4m bested Kucinich more than five times over.

Among Cordray’s contributors were members of the lending industry he once regulated. Kucinich, meanwhile, refused to take corporate cash.

Another critical issue in tomorrow's election? Corporate influence. Tara and I have pledged to refuse money from corporate PACs – along with the NRA, fossil fuel and charter school industries.

Voters have asked our opponents, repeatedly, to make the same pledge. They've refused.

Again, in the crucial money race, Manchin trounced first-time candidate Swearengin. He raised nearly $6m and spent $2.38m to win the race. Swearengin raised just less than $180,000 and spent barely more than $125,000 on the race.

Of course, centrist Democrats ignore these massive differences in fundraising and look only at the huge wins for their preferred candidates.

Among the biggest proponents of this ‘moderates are the stronger candidates’ argument was Neera Tanden from the ‘Center for American Progress‘:

Dems and Reps are different: In reaction to a reasonable Obama, GOP went far right in their primaries. In reaction to an insane Trump, Dems are going with the candidates they believe best able to defeat GOP. #practicalprogressives

Tanden is known for her support of Hillary Clinton in the 2016 Democratic presidential primary. The ‘practical progressive’ label couldn’t be any clearer, echoing Clinton’s ‘progressive who likes to get things done’ quote from the primary.

A progressive who gets things done? Make that two. https://t.co/zqsXNdDqEU pic.twitter.com/dmTATNcbby

Instead of moving left with the grassroots base, establishment Dems want to stick with the status quo ‘reasonableness’ of Obama and Clinton.

Are voters really picking the best candidate? Or are they simply picking the candidate with the most money to spend on a ground game and advertising?

Not surprisingly, study after study shows the candidate with the most money usually wins the race.

It’s impossible to know how close the races in Ohio and West Virginia would have been if Swearengin and Kucinich had had the kind of money their opponents raised. But one thing is clear: any challenger who wins on a shoestring budget against a campaign flush with cash is bucking the trend.

– If you want to see more people choosing the best candidate over the best-funded candidate, then you can support the anti-corruption groups I mentioned in my last article on money in politics. These groups include Move to Amend, Represent.US, and Wolf-PAC.