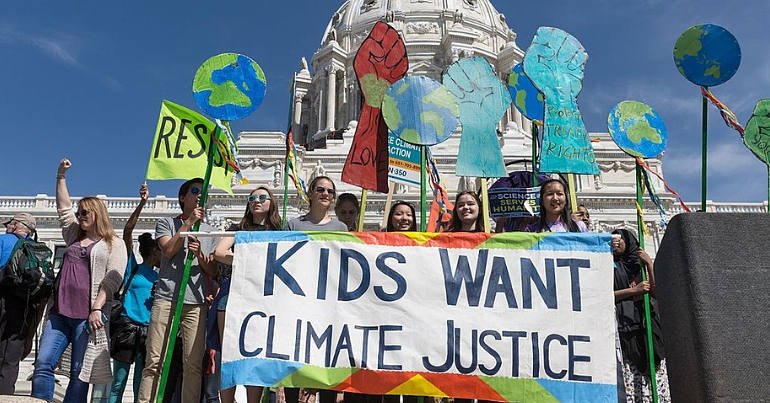 The Trump administration has failed in its latest bid to defeat a climate change lawsuit against the government. On 2 November, the Supreme Court ruled against the government’s attempt to stop the lawsuit. The case can now continue to trial, although the government can still ask a lower court to dismiss it. One of the lawyers in the case has said that it is now “back on track for trial in the next week.”

The lawsuit, Juliana v United-States, has been brought by a group of 21 young Americans. They claim that the government has shown “deliberate indifference” to the “peril” of climate change, and that:

For the past fifty years, Defendants have known about the danger to Plaintiffs’ safety created by carbon pollution. Acting with full appreciation of the consequences of their acts, Defendants knowingly caused, and continue to cause, dangerous interference with our atmosphere and climate system. Defendants have knowingly endangered Plaintiffs’ health and welfare by approving and promoting fossil fuel development, including exploration, extraction, production, transportation, importation, exportation, and combustion, and by subsidizing and promoting this fossil fuel exploitation. All of these deliberate actions by Defendants have cumulatively resulted in dangerous levels of atmospheric CO2, which deprive Plaintiffs of their fundamental rights to life, liberty, and property.

The lawsuit also claims that in its failure to act on climate change, the government is discriminating against them since as young people they will be disproportionately affected by climate change in the future.

The case was originally brought in early 2015 against the Obama administration, which also tried – and failed – to have it thrown out. When President Trump came to office in January 2017, he inherited the lawsuit.

Oil companies take up the fight…

In late 2015, major oil companies including BP, Exxon and Shell filed a motion to intervene in the case. The companies claimed that the lawsuit represented a “direct threat” to their business. They said that whilst reducing carbon emissions would:

abate some of the future risks of climate change, those reductions would nevertheless not be ‘appropriate’ if the future potential benefits would be outweighed by, for instance, enormous losses in productivity and economic development.

…but soon back out

The oil companies motion to intervene was granted. But over the next 18 months, the young people bringing the lawsuit won a number of legal victories as the case made its way through the courts. In May 2017, the oil companies withdrew from the case. They gave no explanation other than that it would “reduce the amount of discovery” and avoid duplicating proceedings. Discovery is the process whereby each side can request information from the other before the trial begins.

Julia Olson, a lawyer for the young people, said:

After these youths sued the government, the trade associations pleaded their members’ interests would be destroyed if they weren’t allowed to be in the case, but now they are running for the hills. Now, they’ve decided they’re better off being on the sidelines than subjecting themselves to discovery.

Legal action around the world

The latest stage in this long-running case is another victory for those trying to force the US government to take action on climate change. But they’re not alone. People around the world are increasingly turning to the courts in the face of inaction by governments on climate change.

Last month a court upheld a ruling against the Dutch government which ordered it to reduce greenhouse gas emissions by at least 25% by 2020. Citizens in Germany and Uganda are suing their governments for inaction on climate change.  Norwegians are suing their government over its plans for Arctic oil exploration. In the UK, Plan B is taking the government to court over failing to set a safe climate target, and for plans to expand Heathrow airport. And the People’s Climate Case against the EU, demanding stronger emissions targets, is moving forwards.

Most governments are failing to act with the necessary urgency to prevent catastrophic climate breakdown. Legal action, combined with direct action, may be the only way to force them to do the right thing.

– Read our other articles on climate change.