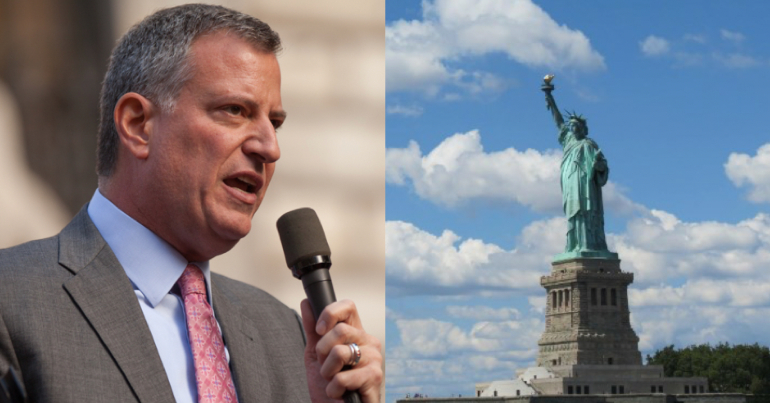 On 10 January, New York City mayor Bill de Blasio gave a rousing speech outlining his plans for the year ahead. It included many bread and butter social democratic proposals that most Europeans take for granted, such as statutory paid vacation for private-sector workers and access to medical services for those without private health insurance.

But it was his criticism of the city’s wealth distribution that got the most coverage.

“There’s plenty of money in this city. It’s just in the wrong hands.”

Speaking to a packed crowd of supporters, de Blasio stated:

The New York Times said that he was “cast[ing] himself as an aspiring Robin Hood”. The right-wing press, meanwhile, predictably waxed lyrical about the supposed evils of redistribution and high taxes.

Poverty and homelessness vs greed and excess

The numbers speak for themselves. One in 128 New Yorkers is homeless. And around 20% of the city (and one in three of its children) live below the poverty line.

New Yorkers who work for the city’s major financial institutions, meanwhile, make outrageous salaries and bonuses. Some examples of the exorbitant amounts of money Wall Street CEOs got in 2017 include:

Keep in mind that these are some of the same financial institutions whose reckless behavior plunged the global economy into its worst crisis since the Great Depression of the 1930s. The ‘Great Recession’, as some call it, led to millions of ordinary Americans losing their jobs, homes, and/or pensions.

But there’s more to it than that. Simply put, the financial industry has grown far too big. In his recently released book The Finance Curse, Nicholas Shaxson points out that once the financial sector grows beyond a certain point, rather than helping the rest of the economy, it actually harms it by sucking money out of its productive sectors. As AlterNet wrote in 2011:

Banking, like trucking, is known as an “intermediary good” — nothing is produced by the industry – and if any other intermediary good represented around 10 percent of the U.S. economy, people would consider that a major problem.

A pressing need for fundamental change

De Blasio has hit the nail on the head. But words aren’t enough. He needs to not just implement a strong redistributive program, but confront the power of the financical sector and rebalance the city’s economy.