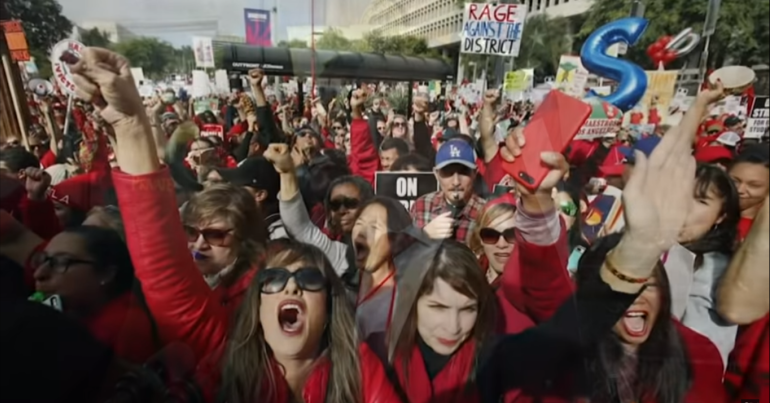 On 14 January, Los Angeles public-sector teachers went on strike for the first time in three decades. After six days of picketing and a mammoth negotiating session, the teachers have extracted some important concessions.

The teachers secured a 6% pay rise, decreases in class sizes, and more school nurses and counsellors. Speaking about the strike in one of the country’s low-income regions, one teacher told CNN:

We work with students every day who face trauma and face hardship. We’re doing this as a life passion to improve our community.

LAUSD teachers – 43% of whom are Latino – feel a heightened sense of socio-economic solidarity with their students, who are overwhelmingly Latino.

Teachers were pictured celebrating after the deal was agreed:

LA strikers celebrating: they won big wins on class size, nurses and counselors, and much more. Folks are euphoric. pic.twitter.com/PMdfHy8inG

You just taught the best lesson of your lives.

UTLA leader Alex Caputo-Pearl is 🔥🔥🔥: "You just taught the best lesson of your lives!" Watch him bring down the house at today's victory rally pic.twitter.com/1fEn8hBTfi

Although not all votes are counted, a “vast supermajority” of the roughly 30,000 teachers appear to have voted to end the strike.

However, many of the LA teachers’ demands don’t end at better wages and conditions.

Billionaires vs teachers: ‘an existential battle for public education’

One teacher described this struggle as “an existential battle for public education”. The reason? Business leaders in LA are trying to divide the entire school district into 32 separate, competing networks of ‘charter schools’ (the equivalent of Britain’s controversial academies). Once broken up, the school system would then be open to private investment and massive profiteering.

This process, moreover, would strike a heavy blow to the UTLA – one of country’s most significant unions – as the charter system isn’t unionised.

The billionaires funding the push for privatisation include the Walton family (founders of Walmart, and the world’s richest family) and Reed Hastings (founder of Netflix). And they’re not just targeting the LA school system. Even though some of these billionaires have no credentials in creating education policy, they are lobbying for a roll-out of privatisation nationally.

Now, the teachers have won “increased union oversight regarding charter co-locations” and “political support for a statewide moratorium on charters”. So, for the time being at least, the privatisation effort has been halted.

Not the last strike

The LA teachers’ push-back against privatisation is both a real and symbolic victory for public-sector workers in the US. As Eric Blanc reported for Jacobin magazine:

Los Angeles strikers are leading the charge for a society that works on behalf of the many, not the few.

US teachers elsewhere, meanwhile, appear to be galvanised by the victory in LA. Strike leaders (or ‘captains’) are now meeting in Denver, for example, after teachers voted to strike on 22 January. Teachers in Virginia also appear close to doing the same.

Do you know what you do when your opponent is stunned? You double down and keep on punching them more, and you try to end it right there.

This is what genuine hope looks like. And it’s what the 1% fears the most. They don’t simply break strikes on behalf of singular business interests. They break strikes to neutralise the threat of a good example: the threat of successful organised labour. We must, therefore, take inspiration from the LA teachers – and never forget the power of collective bargaining.