'Russiagate' has little to do with Russia. It's a tool to destroy anti-war resistance. - Canary 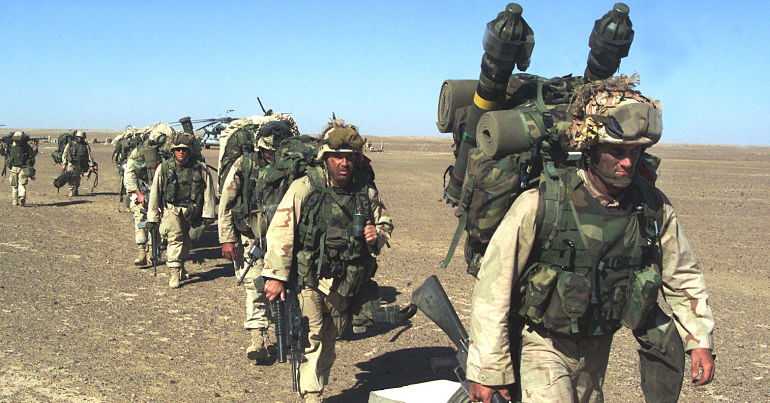 In the US, the likelihood of being smeared as a Russian stooge seems to be directly related to the popularity of your anti-war message.

Anti-interventionists who fly too close to political power get scolded by the corporate media, which consistently (and falsely) links them to Vladimir Putin. If Russia also opposes US imperialism, so it goes, you must be with them.

The lack of evidence for Russiagate smears doesn’t matter, though. Because they are of service to the US war machine. And if opposition to US aggression can be written off as a Russian conspiracy, resistance is weakened and the war machine can roll on unaffected.

The latest victim of such Russiagate smears is aspiring presidential candidate and US army veteran Tulsi Gabbard. And the attacks show just how desperate the political and media establishment are getting.

Demonising Russia is not a new technique. But it’s certainly effective. Throughout the Cold War, the US consistently exaggerated the Soviet threat to justify its own imperialist plundering. And after almost two decades of the ‘war on terror’, the propaganda machine has come full circle.

Today, Gabbard is the latest in a long list of US politicians to face accusations of directly or indirectly doing Russia’s will.

Congress member Gabbard announced her candidacy for the 2020 presidential election this week in Hawaii.

For all her downfalls, she’s been a vocal critic of Washington’s disastrous record of regime change. “As commander in chief,” she claimed, “I will work to end the new cold war”:

As commander-in-chief, I will work to end the new cold war, nuclear arms race and slide into nuclear war. That is why the neocon/neolib warmongers will do anything to stop me. https://t.co/MPybv8AZ5p

Gabbard’s position on US sanctions and interference in Venezuela has also been particularly strong:

.@TulsiGabbard denounces Trump's sanctions & threats of military action in VZ, saying US regime-change wars have "brought suffering to millions of people" & "bankrupted our country". She declares there's "no justification… to violate the sovereignty of the VZ people." pic.twitter.com/EFpMhRtZYD

Experts who track websites and social media linked to Russia have seen the stirrings of a possible campaign of support for Hawaii Democrat Tulsi Gabbard.

One of the article’s authors shared it on Twitter, and added: “The Kremlin already has a crush on Tulsi Gabbard”.

What NBC left out, quite incredibly, was that the very same “experts” had been caught fabricating claims of Russian election interference for the Democratic Party just six weeks prior.

On 19 December 2018, the New York Times reported that ‘New Knowledge’ – the same source relied upon to smear Gabbard – had “experimented with many of the tactics now understood to have influenced the 2016 elections”. New Knowledge used a “Russian botnet” (Twitter accounts that were made to appear Russian-operated) to smear Republican candidate Roy Moore. This came after New Knowledge had helped to author a senate intelligence report alleging Russian interference in US elections.

In other words, New Knowledge should never have been used as a source by a national newspaper. The fact that it was suggests this is a desperate, shameful, and organised smear campaign against Gabbard.

Russiagate: a monster of the Democrats’ creation

Journalist Max Blumenthal discussed in 2017 how establishment forces would use the Russiagate narrative “to push permanent war”. This, indeed, they have. And to a certain degree, it is a monster of the Democrats’ making.

Establishment politicians like Hillary Clinton have pushed the Russiagate narrative. But vitally, so have progressives. Most notably, in the words of journalist Alan MacLeod, “[Bernie] Sanders has consistently and explicitly endorsed the RussiaGate theory”.

Of course, Sanders’s promotion of the Russiagate narrative hasn’t left him immune from accusations of links to the Kremlin. But by promoting Russiagate, Sanders has played an important part in legitimising today’s smear campaigns against himself and Gabbard.

“Nothing to do with Russia”

In the words of independent journalist Caitlin Johnstone:

Make no mistake, these smears have everything to do with anti-interventionism and nothing to do with Russia. There will never, ever be an antiwar voice who the political/media class and their centrist followers espouse as good and valid.