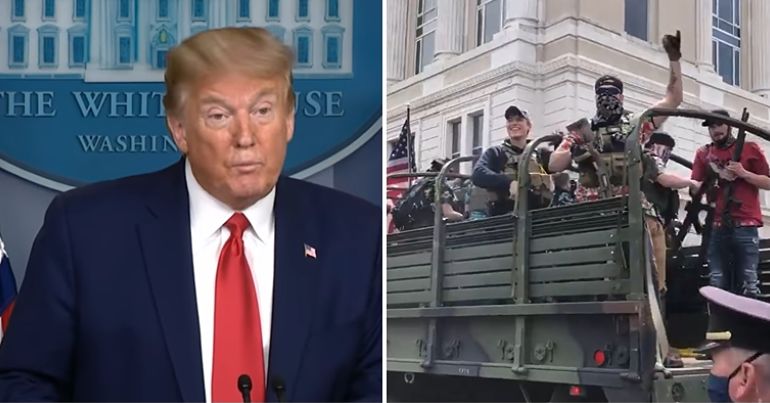 Different states across the US have been living with coronavirus (Covid-19) restrictions for several weeks. And as unemployment claims exceed 22 million, people fear these restrictions are damaging their economy.

So some states have begun to ease the restrictions. However, president Trump still called on protesters to “liberate” states in lockdown. Some states have now seen paramilitary groups and people shouting racist abuse taking part in these protests.

In fact there have been anti-lockdown protests in over a dozen states so far. Not only are these protests unleashing racism onto the streets, they’re further endangering lives by risking a ‘second wave’ of the virus.

Too soon to lift lockdown

Anthony Fauci, the director of the National Institute of Allergy and Infectious Diseases (NIAID), believes it’s too soon to lift the lockdown. Fauci believes reopening quickly could lead to a second wave of the virus in the autumn. He also believes any hasty decision to lift restrictions could “backfire” and damage the economy.

And Fauci’s not alone. According to a Harvard CAPS-Harris poll reported in the Hill, there’s significant support across the US for the restrictions, with many believing they should have happened sooner. Furthermore, according to a Yahoo News/YouGov poll, a majority of Americans oppose the right-wing anti-lockdown protests encouraged by Trump.

While some of the people attending anti-lockdown protests didn’t believe coronavirus was real, others simply wanted to return to work to “provide for our families”. And it could be that this frustration at being unemployed is being exploited by far-right and conservative groups.

This is a free country. This is the land of the free. Go to China!

Racist targeting since the outbreak

In February, The Canary reported that British East Asian people had experienced a rise in racism as a result of the outbreak in China. Then, in late March this year, the New York Times reported Asian-Americans had been racially abused since Trump started blaming China. As The Canary also reported, Trump has been using it as part of his re-election campaign.

But reports of coronavirus-related racism are not just in Trump’s America. In Paris, police have been accused of racism for arresting a disproportionate number of people with Arab and Muslim backgrounds. An Irishman who has lived in China for 18 years claims he was refused entry to a lift in the building where he lives because he was a “foreigner”. There have also been reports of anti-African discrimination in the southern Chinese city of Guangzhou.

As well as inciting these protests, Trump stands accused of reacting too slowly to the virus, costing the lives of many American citizens. Yet his plan to act too quickly now and re-open the US could also cost lives.

The health of its people must be the number one priority for any government. And naturally, the head of government must take the lead in demonstrating the importance of people’s health.