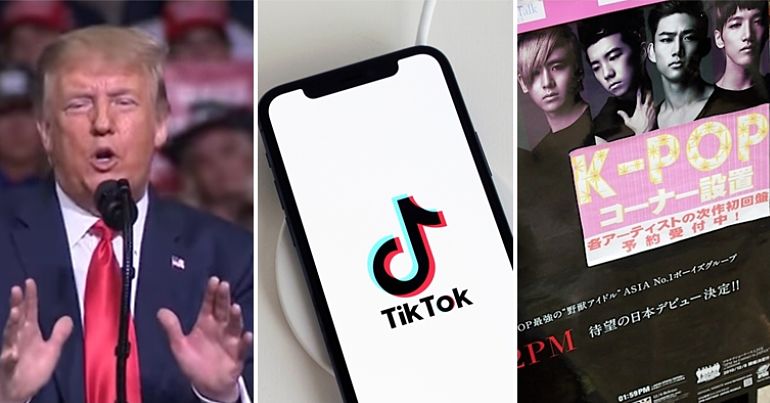 On 20 June, Donald Trump’s first campaign rally in months in Tulsa, Oklahoma was a flop. And despite his campaign manager claiming over a million people had requested to attend, the 19,000-capacity arena was less than one-third full.

A lot of the credit for this poor attendance went to K-Pop (Korean pop music) fans and users of the social media video app TikTok. Reports say K-Pop fans and TikTok users registered for tickets with the sole intention of not attending. But the poor attendance might not be just due to teenage pranksters. What’s more, it could be a sign Trump’s support is beginning to fail ahead of the presidential election on 3 November.

Coronavirus and US elections

One explanation for the low turnout might also be people’s fear of attending a large gathering during this pandemic. US states that have reopened since the lockdown have shown an increase in coronavirus (Covid-19) cases. In fact, cases in Oklahoma jumped by 91% in the past week. And Tulsa county itself reported yet another daily high in cases just 24 hours before the Trump rally.

However, Oklahoma has been a Republican stronghold since the 1960s. Furthermore, Trump secured more than twice the vote of his Democrat rival Hillary Clinton during the 2016 presidential election in this state.

This led one MSNBC reporter to say:

Trump faced criticism for initially scheduling the rally for Juneteenth on 19 June. Juneteenth “marks the day in 1865 when slavery was abolished in Texas – two and a half years after president Abraham Lincoln signed the Emancipation Proclamation“. This declared that people held as slaves in the states rebelling against the Union “shall be then, thenceforward, and forever free”.

But the campaign to undermine Trump’s event was already underway. And some teenagers had reserved “hundreds of tickets”.

While poor attendance might embarrass Trump, it pales in comparison to his shocking claim about coronavirus (Covid-19) testing. He claimed his administration had tested “25 million people” and this was “probably 20 million people more than anybody else”. But then he claimed “when you do testing to that extent, you’re going to find more people, you’re going to find more cases.” So he says he asked his people to “slow the testing down please”.

It was a shocking statement as around 120,000 people in the US have already lost their lives due to the pandemic. And experts have said testing is key to stopping its spread. It led to an outpouring of criticism from experts. Professor of public health at Yale University Howard Forman said:

Blood is on his hands.

And while White House adviser Peter Navarro claimed Trump was being “tongue in cheek”, he also repeated the unfounded claim that “China created this pandemic”. These echoed other anti-Chinese coronavirus-related claims made by Trump.

Former allies turning against him

And in addition to medical experts, former colleagues and Republican Party members are speaking out against Trump. His former national security adviser John Bolton said Trump was “naïve and dangerous”. And while Bolton didn’t declare for Democrat Joe Biden in the upcoming election, he said he hopes Trump is remembered as a “one-term president”.

There had previously been criticism from Trump’s former secretary of defence Jim Mattis. In response to Trump’s handling of the protests following the killing of George Floyd, Mattis said:

Donald Trump is the first president in my lifetime who does not try to unite the American people—does not even pretend to try. Instead, he tries to divide us

He attacked Trump for ‘dividing people in the US’, and for threatening to use the military against “people of conscience” who were protesting George Floyd’s killing. Former secretary of state Colin Powell added to this, saying Trump had “drifted away” from the US constitution. Powell has already said he’s supporting Joe Biden in the November election.

Debunked calls against China and the WHO

Furthermore, claims made by Trump about China and the World Health Organisation’s (WHO) role in the spread of the virus were debunked by media watchdog website FAIR. Elements of the US mainstream media supported Trump’s claims, according to FAIR.

The Trump administration accused the WHO of “severely mismanaging and covering up the spread of the coronavirus” and for taking China’s explanation at “face value”. However, according to the watchdog, China has apologised for not handling the pandemic perfectly and has made much of its information public.

The campaign against Trump doesn’t end there. The estate of Tom Petty told the Trump campaign not to play any more of the late singer’s music at campaign rallies. It said:

We believe in America and we believe in democracy. But Donald Trump is not representing the noble ideals of either

This follows in the footsteps of other artists such as Rihanna, the Rolling Stones, and the estate of Prince.

While it’s early days in terms of the US presidential election, indications show Joe Biden is ahead. Biden’s lead could be a result of Trump’s handling of the pandemic or the protests following the killing of George Floyd.

But it could also simply be because of Trump’s sorry record in office. Because during his three and a half years, he’s increased bombing in Afghanistan, he described far right protesters as “very fine people”, he was impeached over an alleged abuse of power and he’s presided over 140 million people in the US living in poverty. Maybe that message is finally getting through to people. And just maybe, it means his time in the White House ends this November.