US sports team finally drops its racist name. But much more will be required to redress historical wrongs. - Canary 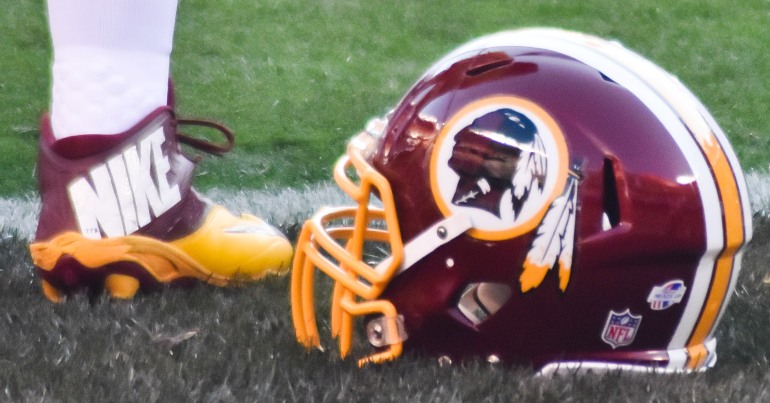 The US capital city’s American football team has officially dropped its historic name and logo following decades of criticism. The name has been widely condemned as a derogatory racial slur against Native Americans while its logo has come under fire for playing on racist stereotypes. This move should be welcomed and is indeed long overdue. But it represents just a small symbolic first step. Because there’s still a great deal of work ahead to mend the historic injustices committed against North America’s indigenous peoples.

Decisive action after years of dithering

On 13 July, Washington, DC’s American football franchise announced that it will no longer be calling its team the “Redskins”. It added that it will also cease to use its historic logo featuring a Native American man’s head with feathers flowing from his long, braided hair. Owner Dan Snyder and his predecessors had faced decades of criticism for failing to make these changes, including from leading Native American scholars and activists as well as official tribal organizations.

Snyder, who has owned the National Football League (NFL) team for about 20 years, had until now been stubborn on the matter, refusing to budge in spite of the pressure. It appears that fallout from sponsors and other partners is what ultimately tipped the scales. FedEx, a private US delivery service company that currently has the naming rights on the team’s stadium, indicated earlier this month that it supports a name change. Clothing sponsor Nike also announced that it was removing all of the team’s merchandise from its website.

Use of Native American-themed names and imagery by US sports teams has a long and controversial history. Other sports franchises including the Atlanta Braves and Cleveland Indians baseball teams have also come under fire for playing on negative stereotypes about Native Americans. But Washington’s American football team has faced particularly fierce criticism since the word ‘redskin’ is an offensive ethnic slur according to its own dictionary definition and perhaps even comparable in offensiveness to the ‘N word’.

The word dates back to colonial times in North America and is believed to have possibly originated from the fact that some Native American tribes used to paint their skin red for ceremonies or as warpaint in battle. And though long, braided hair worn with decorative headdresses was common among Native Americans of both sexes in times gone by, today this is largely considered a crude stereotype.

This latest move represents a major victory for campaigners and Native American rights activists. However, it nonetheless represents a largely symbolic first step rather than a final victory in redressing the many historic injustices that have been committed against North America’s indigenous peoples.

To this day, many people in the US are ignorant about the extent of both the historical mistreatment of Native Americans and the injustice that they continue to face to this day. As The Canary has previously reported, Native Americans have been subjected to systemic displacement and discrimination ever since the European colonization of North America.

In fact, the word genocide is not an exaggeration. Because historians have estimated that their population could have been as high as 18 million upon European contact. By 1890, however, this had sunk to under 250,000.

A long history of mistreatment…

Much of this population decline was caused by diseases brought by European settlers to which Native Americans lacked immunity. But much of it was also caused by warfare. Following continuous defeats in wars against the more powerful and well-armed US military, Native American tribes were often forced to sign treaties in which they surrendered their homelands. Even so, the US government has nonetheless still frequently violated these treaties.

The land left aside for them was often the most barren and infertile – essentially what was left over once European settlers had secured the most valuable areas. Native Americans also suffered from extensive ethnic cleansing. During the ‘Trail of Tears’, for example, eastern tribes were forcibly relocated from their historic territories to land west of the Mississippi River.

…that continues to this day

As time went by, Native American tribes were granted ‘reservations’ that, as special jurisdictions, have some degree of political autonomy. However, they are often poorly served, lacking in even basic utilities and mired in poverty and chronic mental and physical health problems.

Perhaps the most shocking example is the Pine Ridge Reservation in South Dakota, which contains within it the poorest county in the entire United States. Life expectancy stands at a paltry 48 years and 52 years for men and women respectively. Tuberculosis runs rampant at roughly eight times the national average. And unemployment rates hover at around the 80% mark while the median household income is about $4,000 per year.

A tough way of life for a marginalized community

Meanwhile, extractive industries have sometimes encroached onto Native American lands when natural resources have been discovered there – often without permission or even the slightest thought about potential consequences for those living there. Uranium and coal mining on the Navajo Nation and Hopi Reservation, for instance, has led to a decades-long public health crisis for members of those tribes.

Although today the majority of Native Americans do not live on reservations, life is often just as tough as for those who do. Many live in impoverished inner-city neighborhoods and face many of the same kinds of issues as impoverished African-Americans. Native Americans, for example, are incarcerated at a rate 38% higher than the general US population.

Certainly, the Washington football team’s move should be celebrated. But it will take a lot more than changing the name or logo of the odd sports team to redress the centuries of oppression and mistreatment of Native Americans. Perhaps this should serve as an opportunity for the US government to consider recognizing, or better still renegotiating, treaty rights as well as addressing the systemic poverty and deprivation that Native Americans continue to face to this very day.