US conservative lawmakers are taking aim at trans rights - Canary 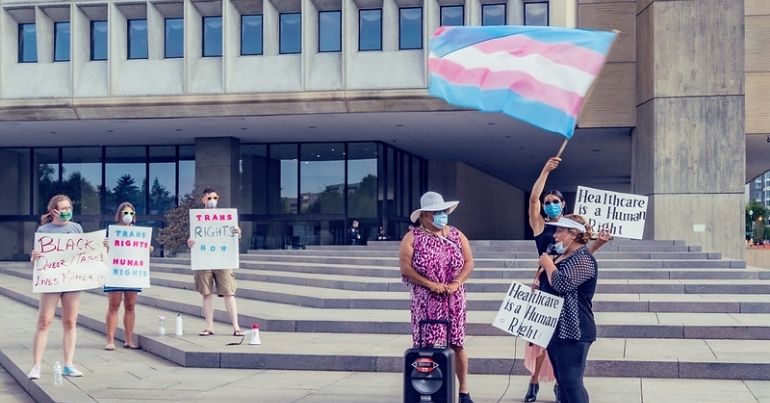 Arkansas lawmakers have passed “the single most extreme anti-trans law” amid a growing number of proposals to limit transgender rights in the US.

The bill bans transgender young people from accessing gender-affirming care such as hormones and puberty blockers.

The republican governor of Arkansas now decides whether the bill is signed into law as transgender rights campaigners and youth health and welfare groups criticise the bill’s passage.

It’s one of the worst bills that they could have created.

It’s just expected that if this passes, it will cost lives, and they don’t seem to care about that. It’s already difficult enough to survive here, when they’re not actively creating more laws to oppress us.

The Arkansas senate, which contains 27 Republicans, seven Democrats, and one independent, voted 28-7 for the bill yesterday.

Asa Hutchinson, the Arkansas governor, can sign or veto the bill within five days of receiving it. If he does not act, it becomes a law regardless. Hutchinson has not made a statement about the bill but has previously backed anti-transgender legislation.

Transgender campaigners are calling on allies to petition Hutchinson to veto the bill.

The legislature in Arkansas just passed HB 1570, a dangerous bill banning health care for trans youth. Trans people can call us for support, but we need our allies to call on @AsaHutchinson to veto this bill:

The American Civil Liberties Union (ACLU) has vowed to take legal action if the law is passed, with transgender justice deputy director Chase Strangio calling it “the single most extreme anti-trans law to ever pass through a state legislature”. Strangio said:

I really worry about the fact that we’re just a few votes away from some of the most sweeping and damaging and potentially genocidal laws from ever being passed, and we barely have a mention of it in the bigger national conversation of what’s going on in this particular moment in U.S. history

The bill prevents Medicaid from being used for trans-related care, as well as banning gender-affirming care for transgender people up to 19-years-old.

The bill’s passage comes as more and more conservative lawmakers introduce laws restricting transgender rights across the US.

Other states beside Arkansas have proposed bills restricting access to gender-affirming care. Among them are Texas, Alabama, and Florida.

Arkansas has also just passed a law preventing student transgender women and girls from competing in sports matching their gender identity. Similar laws have been passed in Mississippi, Tennessee, and South Dakota.

According to Human Rights Campaign, legislation filed earlier in March marked 2021 as having the highest number of anti-trans bills introduced in history.

Several organisations have criticised the impact anti-trans legislation will have on the mental health of transgender children.

A doctor in Arkansas told the senate on 22 March that they had seen “multiple” children in the emergency room for attempted suicide after the bill passed the house.

The American Academy of Pediatrics has voiced its opposition to anti-trans youth legislation, recommending transgender children have access to gender-affirming care:

With alarm and dismay, pediatricians have watched bills advance through state legislatures across the country with the sole purpose of threatening the health and well-being of transgender youth.

The American Academy of Pediatrics has long been on the record in support of affirmative care for transgender children through our clinical policy.

Politics has no place here. Transgender children, like all children, just want to belong. We will fight state by state, in the courts and on the national stage to make sure they know they do.

A law that cannot pass

If this bill is signed into law, it could open the gates for conservatives to take away the rights of transgender people across the US.

As a doctor told the Arkansas senate, these laws are not only backward and discriminatory; they often have tragic consequences for transgender people.