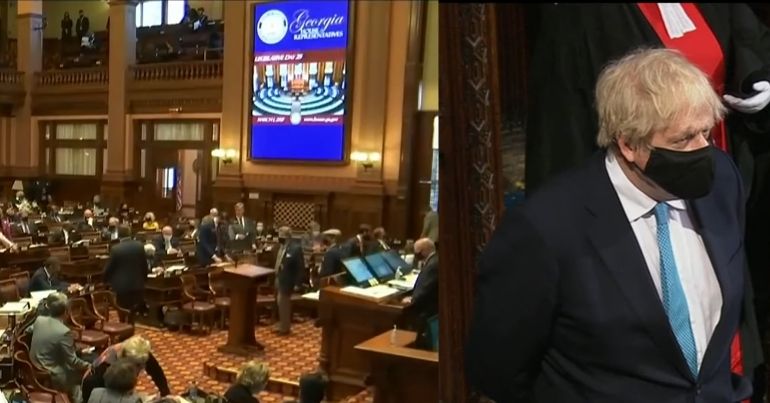 Republican lawmakers are attempting to pass legislation making it harder to vote in the US, forcing Democrats to take extraordinary action to combat it.

GOP legislators in several states are advancing bills that place more restrictions on voting, prompting Democrats to leave the state to stop the bills from passing. This comes after Donald Trump’s election loss last year, which he falsely claimed was due to voter fraud.

But it’s not just in the US where voting rights are under threat. In the UK, the Tories also have plans that threaten the franchise.

Flying out of the state

In response, Democrats flew out of the state – as the Republicans need a two-thirds quorum to go ahead with state business. Quorum refers to the minimum number of members of a legislature that must be present to make the meeting valid.

Texas Democrats had employed a similar walk-out in May to protest the voting bill at an earlier stage – but the last time they actually left the state to stop the progress of a bill was 2003.

Texas already has some of the tightest voting laws in the US, with only those meeting specific criteria – such as being disabled or over 65 – able to vote by post. Trump won the state in the 2020 election, but it had some of the lowest turnout figures across the country.

Texas isn’t the only state where Republicans are trying to curb voting rights – the GOP has also advanced restricting bills in states such as Alabama and Florida.

Biden has asked for reinstatement of some of the parts of the 1965 Voting Rights Act that the Supreme Court got rid of in 2013.

However, he did not endorse a change many Democrats are asking for. Voting rights advocates want him to support alterations to the Senate filibuster rule so Democrats need only a simple majority vote to pass legislation.

In the meantime, Democrats are also using filibustering as a tactic as they try to resist voting laws. In Alabama, walking out to block the quorum is impossible as Republicans there have a supermajority, meaning a quorum can be formed without Democrats.

As a result, Democrats in Alabama attempted to launch a filibuster to block Republican voting restrictions in May, but it was unsuccessful.

And with a Republican majority in the Supreme Court – Democrats have little support there either. At the beginning of July, the Supreme Court decided a big voting rights case. It upheld two restrictive Arizona voting laws that “essentially gutted what’s left of the Voting Rights Act”.

The scale of the problem

According to the Brennan Center for Justice, as of 14 July, 18 states across the US have enacted 30 laws that restrict voting access just this year. More than 400 bills intending to make it harder to vote were introduced during the 2021 legislative session, across nearly every state.

But the Biden administration is fighting back. The ‘For the People Act’ could make state-level laws less effective. It has passed the House, but still needs to pass the Senate to be enacted into law.

Voting rights advocates Common Cause are calling for US residents to write to their senators and ask them to support the For the People Act:

We the People deserve a responsive, accountable government that gives us all a stronger voice and puts our needs ahead of special interests.

Congress must pass the For The People Act (H.R. 1) — a bold, comprehensive package of democracy reforms including independent redistricting commissions, citizen-funded elections, closing the revolving door between government and corporate interests, and protecting voters against discrimination.

H.R. 1 — is the boldest democracy reform since Watergate. It’s a massive overhaul of money-in-politics, voting, and ethics laws — all to make our democracy more inclusive.

Voter suppression in the UK

It’s not just the US enacting laws to disenfranchise voters – the UK government has also set out plans to introduce a mandatory requirement for voters to provide photo ID.

Opposition MPs and campaigners have slammed the move as one that will decrease turnout, and particularly target minority voters.

When the plans were announced, Labour MP Nadia Whittome said:

Requiring photo ID to vote when 1 in 4 don’t have it will stop people from voting. But that’s the point. Because this isn’t about stopping voter fraud – it’s about disenfranchising the young, the poor, and people of colour. People less likely to vote Tory.

There is no evidence that these restrictions are necessary in either the UK or the US. In the UK voter fraud is such a small problem the reforms are in no way justified, and in the US, new voter restrictions only play into Trump’s false claims that voter fraud led to his loss last year.

The concurrent attempts to disenfranchise parts of the electorate on both sides of the Atlantic are concerning for the future of democracy – particularly because such laws disproportionately affect those less likely to vote Republican or Conservative.