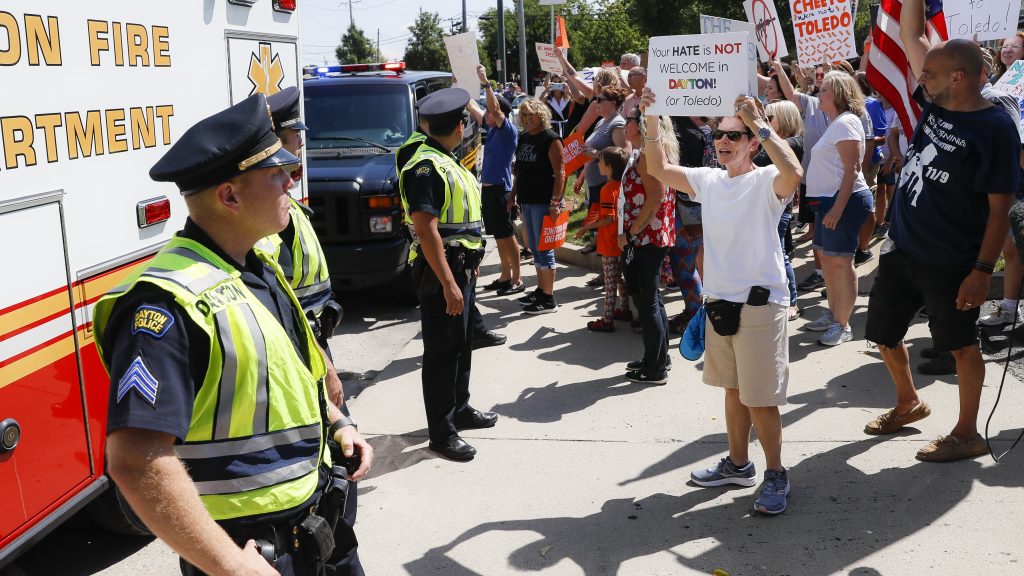 Donald Trump has paid visits to two cities reeling from mass shootings that left 31 dead and dozens wounded, but his divisive words preceded him and prompted large protests and biting political attacks.

The president and first lady Melania Trump flew to El Paso, Texas, late on Wednesday after visiting the hospital in Dayton, Ohio, where many of the victims of Sunday’s attack in that city were treated.

For most of the day, the Republican president was kept out of view of the reporters travelling with him, but the White House said the couple met hospital staff and first responders and spent time with wounded survivors and their families.

But outside Dayton’s Miami Valley Hospital, at least 200 protesters gathered, blaming his incendiary rhetoric for inflaming political and racial tensions in the country and demanding action on gun control.

In El Paso, Democratic presidential hopeful Beto O’Rourke spoke to several hundred people at a separate gathering. O’Rourke has condemned Mr Trump as a racist instigator, but told his audience the open way the people of his home town treat each other could be “the example to the United States of America”.

Emotions are still raw in both cities in the aftermath of the weekend shootings. Critics claim Trump’s own words have contributed to a combustible climate that has spawned death and other violence.

Trump and the White House have forcefully disputed the idea that he bears some responsibility for the nation’s divisions, and he continued to do so on Wednesday.

In Dayton, raw anger and pain were on display as protesters chanted “Ban those guns” and “Do something!” during Trump’s visit.