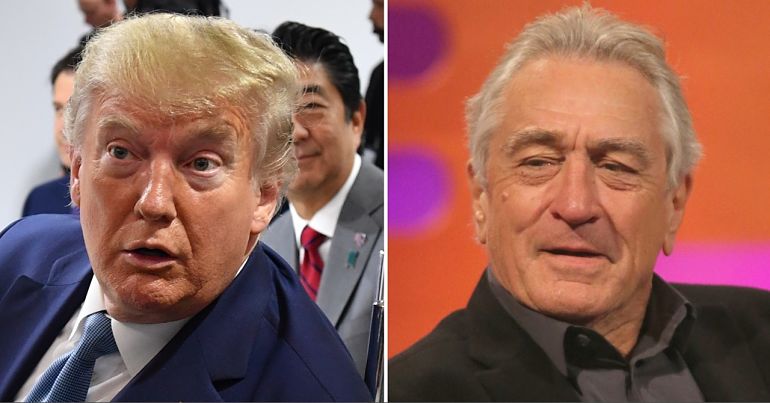 However, the veteran Hollywood star said that the US president does not have the same “honour” that is often exhibited by the characters in traditional gangster films.

De Niro, who is known for starring in a number of mafia and mobster-themed films over the years – including The Godfather Part II and Goodfellas – talked about the genre’s ongoing appeal, telling The Graham Norton Show: “I guess it’s because they defy the law, yet have their own laws, structure and culture.

“There’s more honour. Especially with The Godfather at the time of the Vietnam War.

“The idea of respect and knowing right from wrong (amongst the gangsters) was more than we were seeing from our leaders, we were not being told the truth about what was really going on.”

De Niro, who is a vocal critic of Trump, added: “Today, we have a weird twisted president who thinks he’s a gangster, who’s not even a very good gangster.

“Gangsters have honour, you shake a hand and they have your word and you have theirs and that’s it. But with this guy, it’s not the case.”

The actor has joined forces director Martin Scorsese, his long-time collaborator, for new gangster film The Irishman, which also stars Al Pacino, Joe Pesci and Harvey Keitel, actors he has worked with on numerous occasions.

The movie spans several decades and shows De Niro’s character from when he is in his 20s up to his 80s, using cutting-edge technology to alter his appearance over time.

Described as “an epic saga of organised crime in post-war America”, the film is adapted from the book I Heard You Paint Houses.

De Niro told Norton of working with Pacino: “When Marty (Scorsese) and I read the book, we thought Al would be great and then it was a lot of to-ing and fro-ing and a matter of waiting for everyone to be able to do it.”

Asked if Pesci had come out of retirement to star alongside him in the film, De Niro said: “I don’t know about that, but he wasn’t doing anything at the time, and I said: ‘Who knows if we’ll ever have the chance to do this again? We won’t, so come on, let’s just do it.’

“There was a lot of talking, but he loves Marty and I think he loves me, so he said: ‘Let me do it.’”