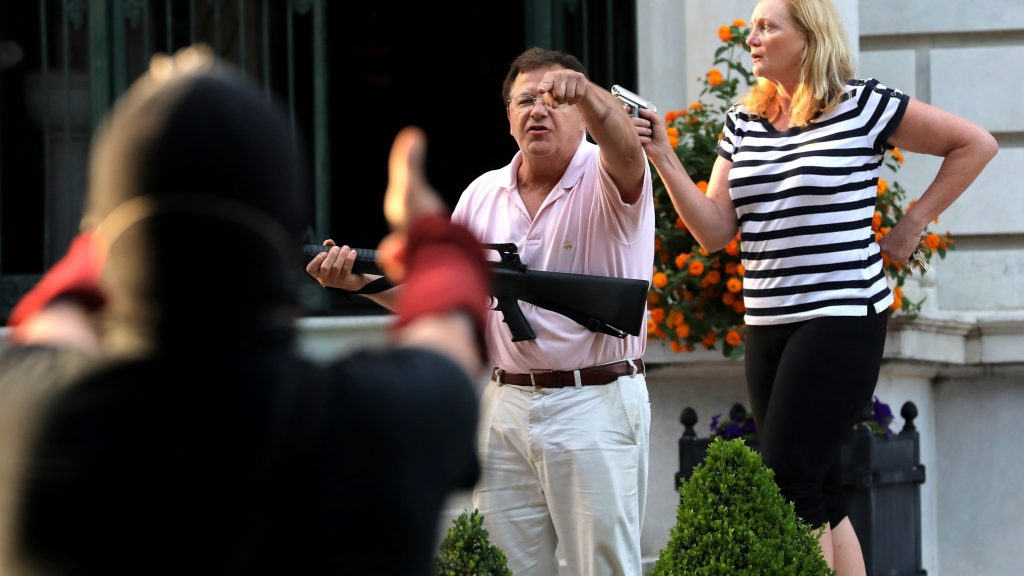 A St Louis couple who brandished guns outside their home as non-violent protesters marched against racial injustice nearby have been charged by prosecutors.

Mark and Patricia McCloskey were charged on Monday with unlawful use of a weapon for displaying guns during a protest outside their mansion last month.

Footage of the white couple, who are both personal injury lawyers in their 60s, went viral amid worldwide Black Lives Matter protests.

“It is illegal to wave weapons in a threatening manner — that is unlawful in the city of St Louis,” Gardner said.

A lawyer for the couple, Joel Schwartz, released a statement calling the decision to charge the couple “disheartening as I unequivocally believe no crime was committed”.

Supporters of the McCloskeys said the couple were legally defending their home.

Gardner is recommending a diversion program such as community service rather than jail time if the McCloskeys are convicted, although the charge can bring sentences of up to four years in prison.

Parson said in a radio interview on Friday that he would likely pardon the couple if they were charged and convicted.

Gardner said Trump, Parson and others were attacking her to distract from “their failed approach to the Covid-19 pandemic” and other issues.

The McCloskeys’ home was initially incidental to the demonstration on 28 June.

Several hundred people were marching to the home of Democratic mayor Lyda Krewson, a few blocks from the McCloskeys’ home. Krewson had angered activists by reading on Facebook Live the names and addresses of some who had called for defunding police.

The McCloskeys live on a private street called Portland Place. A police report said the couple heard a loud commotion and saw a large group of people break an iron gate marked with “No Trespassing” and “Private Street” signs. One protest leader said the gate was open and protesters did not damage it.

Mark McCloskey confronted protesters with a semi-automatic rifle, screamed at them and pointed the weapon at them, according to a probable statement from police officer Curtis Burgdorf.

The statement said Patricia McCloskey then emerged with a semi-automatic handgun, yelling at protesters to “go” and pointing the gun at them.

Protesters feared “being injured due to Patricia McCloskey’s finger being on the trigger, coupled with her excited demeanour”, the statement said.

No shots were fired.

Photos emerged as memes on both sides of the gun debate.