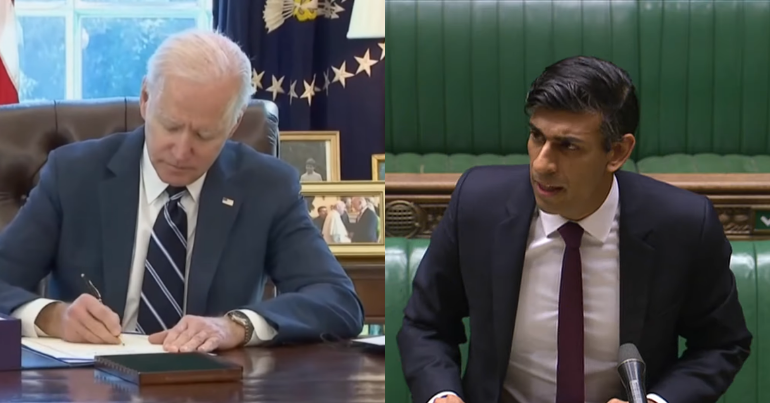 The US government has passed a £1.9tn coronavirus (Covid-19) recovery plan that has the potential to cut child poverty in the US in half.

The American Rescue Plan, which passed through the senate without any Republican support, expands tax credits and food aid, with a particular focus on families. It is the largest aid package ever given in response to an economic crisis in the US.

Signed by president Biden only a few weeks after the chancellor unveiled the UK’s budget for 2021, the stimulus bill throws new light onto British efforts to decrease poverty.

The bill, in addition to relief measures already passed in December, includes:

If all the conditions of the bill are met, Columbia University’s Center on Poverty & Social Policy estimated the measures could halve child poverty in the US. The Center further estimated the bill would lift 13 million people out of poverty and reduce poverty in general by a third.

Indivar Dutta-Gupta, co-executive director of the Georgetown Center on Poverty and Inequality, told the Washington Post:

This legislative package likely represents the most effective set of policies for reducing child poverty ever in one bill, especially among Black and Latinx children…

The Biden administration is seeing this more like a wartime mobilization. They’ll deal with any downside risks later on.

Child poverty in the UK

In contrast, economic relief measures set out by the UK government have not been as ambitious. Rishi Sunak laid out welfare spending as part of the 2021 Budget on 3 March. The measures included a much called-for extension of the £20 uplift in Universal Credit to September, as well as a one-off payment for those on working tax credits.

The £20 uplift has been extended for six months, but policy analysts have said removing it then could be just as damaging. According to the Joseph Rowntree Foundation, cutting the uplift in six months could leave 500,000 people falling into poverty, including 200,000 children.

Child poverty levels were already too high pre-pandemic yet children and parents were noticeable by their absence from this budget. Extending the £20 uplift is vital because struggling families cannot keep afloat without it, but that will be as true in six months as it is now. This decision only postpones the pain. The chancellor promised certainty to business – children and their families deserve no less.

The End Child Poverty Coalition praised the decision to extend the uplift, however coordinator Judith Cavanagh said the chancellor missed a chance to invest in children and make it permanent:

We are deeply concerned about the numbers of children at risk of being pulled into poverty as this extra support will end as unemployment peaks. We urge the Government to tackle the child poverty crisis with a comprehensive and ambitious plan to end child poverty. It is time to free children from poverty that causes shame, stigma and excludes them from the childhood we as a nation agree they all should be able to enjoy.

The chancellor’s budget did include an extension to the Job Retention Scheme (JRS) and income support for self-employed people until September.

And it also extended the higher surplus earnings threshold to Universal Credit until April 2022, and brought forward changes to deductions and advances to payments.

But there was no change to statutory sick pay mentioned in the budget, which is currently set at £96 a week. Campaigners have said this rate makes it difficult for low-income workers to self-isolate. There was also no change to the benefit cap, or mention of supporting more than 500,000 households in rent debt.

In this Budget the Chancellor pledged to ‘meet the moment’. We needed to see bold policy that ensures a strong recovery to match the compassionate moves taken to protect people’s incomes at the start of the pandemic.

The Chancellor should have made the choice to build a different future. One that is characterised by good jobs and investment in people and their skills, where housing is genuinely affordable and where social security is there for us when we need it. The Budget fell far short of what the country requires and of the values we share.

According to government figures, 30% of children in the UK were living in poverty in 2019, a total of 4.2m children.

These figures pre-date the pandemic, with estimates of child poverty in both countries since coronavirus set to increase.

The limits of the stimulus bill

Some Democrats were concerned that some state governors would use the extra funds to subsidise cuts to local taxes. So Senate Democrats added a restriction to the bill at the last minute to stop this happening. This move has been unpopular with Republicans, who say it restricts their ability to manage their state finances.

The bill that passed in the US did not include everything it did originally. House Democrats raised unemployment payments to $400 per week until the end of August, but the senate cut this back to $300.

Senator Bernie Sanders campaigned to raise the national minimum wage from $7.25 to $15. This was included in the House’s version of the bill, but omitted by the Senate.

According to the Congressional Budget Office, increasing the minimum wage to $15 could lift more than one million people in the US out of poverty.

So yes, the bill could have gone further. But when compared to what Sunak and the Tories are doing, there is no doubt that this package of measures puts the UK’s response to shame.