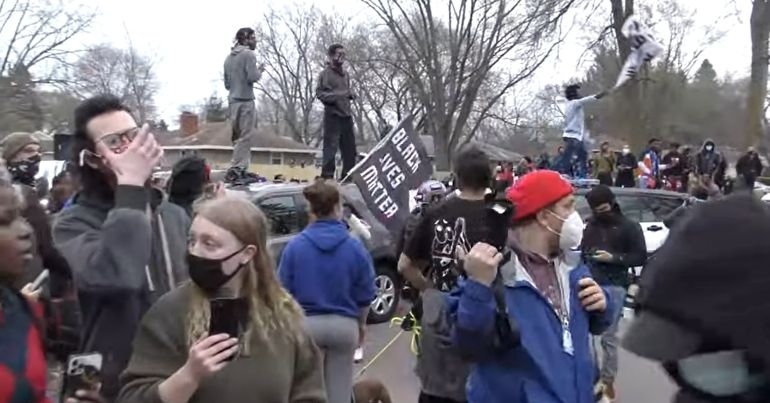 Minnesota police shot and killed a Black man on Sunday, as the trial for the officer accused of killing George Floyd continues in Minneapolis.

Brooklyn Center police shot Daunte Wright, 20, after they pulled him over for a traffic violation, according to his mother, Katie Wright. A medical examiner said yesterday the gunshot was the cause of Wright’s death, and ruled it a homicide.

Katie Wright said her son called her after being told to get out of the car by police. She heard “scuffling” and then her son’s phone was hung up. She then spoke to Wright’s girlfriend, who told her he had been shot. Wright’s mother said:

I heard the police officer say ‘Daunte don’t run’. The other officer said ‘put the phone down’ and hung it up. A minute later I called and his girlfriend answered, which was the passenger in the car, and said that he’d been shot.

She put it on the driver’s side and my son was laying there, lifeless.

In a press release, Brooklyn Center police said they stopped Wright for a traffic violation, and then discovered he had an outstanding warrant.

They claimed Wright tried to get back into his car as they attempted to arrest him. One officer “discharged their firearm, striking the driver”. The car reportedly travelled several blocks before hitting another vehicle. Wright died at the scene.

Police chief Tim Gannon has since told reporters he believes officer Kim Potter meant to draw a taser, but used her gun instead. In her body camera footage, after calls to use a taser, an officer can be heard saying “holy shit, I just shot him”.

While the Hennepin County medical examiner ruled Wright’s death a homicide, they also stated the ruling did not represent “”a legal determination of culpability or intent.”

Protesters, including Wright’s family, gathered at the police department building on Sunday evening, calling for justice for Daunte Wright. Police dressed in riot gear used tear gas and flash bangs to disperse the hundreds of marchers. Protests continued on Monday, with police using stun grenades on the crowds.

Brooklyn Center is not far from Minneapolis, where the trial for the officer accused of killing George Floyd is ongoing.

Tensions are high in the state of Minnesota, as it waits to see whether Floyd’s family will get the justice they are hopeful for: a conviction for Derek Chauvin.

The Minneapolis police chief has already testified against Derek Chauvin, saying he does not believe his actions were within police policy.

In the US, around 1,000 police shootings a year result in fatality. According to data from a researcher at Bowling Green State University, only 139 police officers have been arrested for murder or manslaughter after an on-duty shooting since 2005.

Of these, only 44 were convicted and 42 cases are still pending, highlighting the difficulty in holding police officers to account.

Philip Michael Stinson, who compliled the police conviction data, said he didn’t see any “systemic change” in how police are prosecuted. He added:

it’s got to be that more of the fatal shootings are unjustified.