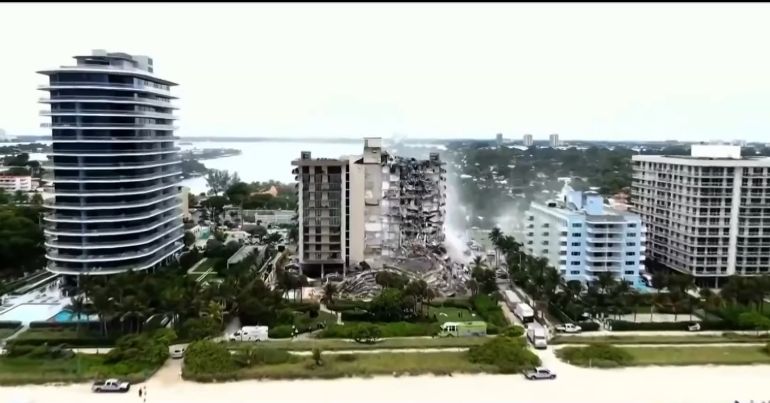 Some residents have told NBC News they weren’t told about the findings of the report. It’s not yet clear what the exact cause of the partial pancake collapse of the building on 24 June was.

As search efforts continue, the death toll has been rising. 12 people have been found dead so far, with 149 still missing.

After the report came out in October 2018, members of the Champlain Towers South condo association did not start the assessment process needed to pay for repairs until this year.

The association approved an assessment in April to complete the repairs, set to cost condo owners $15m.

A letter from the condo association’s board president in the same month warned some of the damage observed in the 2018 report had “gotten significantly worse“.

According to research from Florida International University, the building was sinking at a rate of two millimetres per year in the nineties. The researcher said it could have accelerated or slowed down since.

Rising sea levels are likely to have a large impact on the low-lying land in South Florida. Experts have said the advance of sea levels could threaten buildings in the area, particularly older ones.

According to University of Miami geographer Harold Wanless, South Florida could be hit by up to a foot more sea level per decade in the latter half of the 21st century.

It’s going to be an enormous to impossible job everywhere to deal with that. The sea level rise is accelerating and will do so more dramatically than most people anticipate.

Every sandy barrier island, every low-lying coast, from Miami to Mumbai, will become inundated and difficult to maintain functional infrastructure. You can put valves in sewers and put in sea walls but the problem is the water will keep coming up through the limestone. You’re not going to stop this.

Rescuers are continuing to search the ruins of the building for the 150 missing residents. Concerns have been raised about the safety of emergency workers.

No survivors have been pulled from the rubble since 24 June.

As of 26 June, nine Argentinians and six Paraguayans were among the missing. The Miami Herald reported more of the victims were from Colombia, Venezuela, and Uruguay.

This is a frantic search to continue to see that hope, that miracle, to see who we can bring out of this building alive.