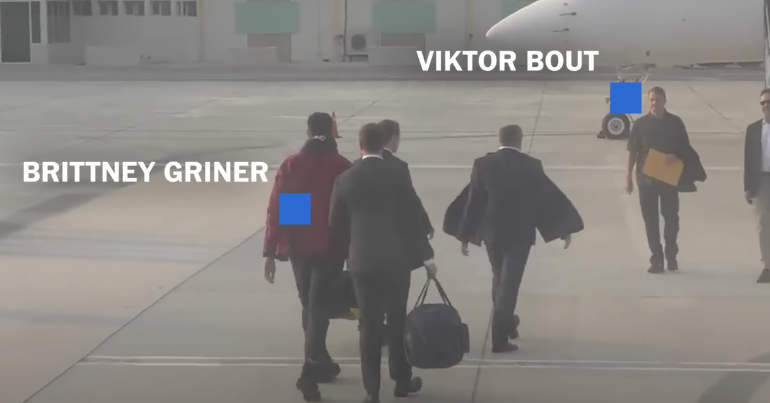 American basketball star Brittney Griner arrived in the United States on 9 December after being released from a Russian prison in exchange for an arms dealer known as the “Merchant of Death.” Griner, who was arrested in Russia in February on drug charges, was seen by an Agence France-Presse (AFP) reporter walking across a runway after her plane landed in San Antonio, Texas.

very good spirits when she got off the plane and appeared to be obviously in good health.

Kirby went on to say that Griner will now be taken to a nearby military facility to make sure she has:

all the access she needs to health care workers just to make sure that she is OK.

Griner was exchanged in Abu Dhabi on Thursday for Viktor Bout, a Russian national who was serving a 25-year sentence in a US prison. In footage released by Russian state media, Griner – shorn of her distinctive dreadlocks – and a relaxed looking Bout crossed paths on the airport tarmac and headed towards the planes that would take them home.

Griner, a two-time Olympic gold medalist and Women’s National Basketball Association (WNBA) champion, was arrested at a Moscow airport against a backdrop of soaring tensions over Ukraine. She was accused of possessing vape cartridges with a small quantity of cannabis oil, and was sentenced in August to nine years in prison. Bout, who was accused of arming rebels in some of the world’s bloodiest conflicts, was detained in a US sting operation in Thailand in 2008, extradited to the United States, and sentenced in 2012 to 25 years behind bars.

At the time of her arrest, Griner had been playing for a professional team in Russia, as a number of WNBA players do in the off-season. She pleaded guilty to the charges against her, but said she did not intend to break the law or use the banned substance in Russia. Griner testified that she had permission from a US doctor to use medicinal cannabis to relieve pain from her many injuries. The use of medical marijuana is not allowed in Russia.

US president Joe Biden announced Griner’s release on Thursday flanked by her wife, Cherelle Griner, pictured in red below:

Moments ago I spoke to Brittney Griner.

WNBA commissioner Cathy Engelbert said there was a “collective wave of joy and relief” in the women’s professional league where Griner has been a star for a decade. On social media, there was also joy at the long-awaited return of Griner – as well as concern.

After 294 days of tireless work… Our friend, sister, loved one, Brittney Griner is FREE. We love you BG 🧡 pic.twitter.com/UQ7PARbVhg

Professor Chanda Prescod-Weinstein pointed out that as a Black woman, Griner faced misogynoir:

None of this would have happened to Brittney Griner if Americans treated women athletes with the same respect they treat men athletes.

I will never ever stop thinking about that. She was a victim of American misogynoir first.

Professor Uju Anya pointed out the unfairness of why Griner was in Russia in the first place:

Glad Brittney Griner will spend the holidays with her wife and family. Still outrageous what Russian govt put her through using her as a political pawn. Also unjust she had to work abroad in the first place to compensate for shitty wages women pro ball players get compared to men https://t.co/t4Az1OrIeW

Writer Sami Schalk reiterated the specifics of Griner’s experience as a Black woman:

No one loves and supports Black women like Black women. Give us space to rejoice that Brittney Griner is free.

let’s never forget that it was women, primarily the Black women she plays with in the WNBA, who made sure Griner’s plight was never forgotten. Black women kept the pressure on President Biden, kept the story in the news and used their platforms to make sure Brittney’s name trended around the world. This is what happens when Black women take the reins and get stuff done.