Veteran republican ‘unrepentant’, mourners told at his funeral - The Canary 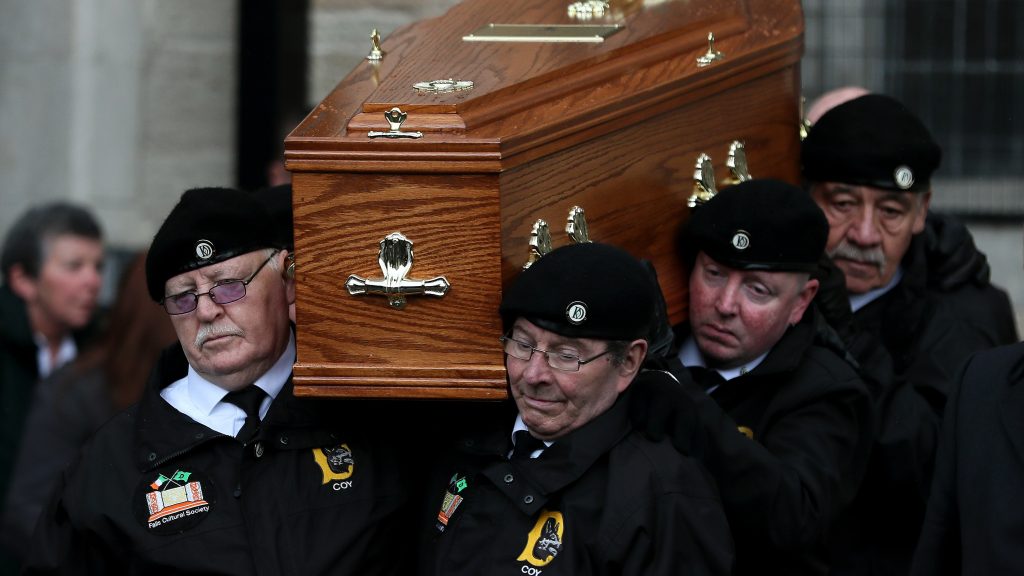 A veteran republican who opposed the peace process died “unrepentant”, hundreds of mourners in West Belfast were told.

Billy McKee, who died on Tuesday aged 97, was a founding member of the Provisional IRA, and a staunch critic of Sinn Fein’s embrace of non-violence.

His funeral was held on Saturday at St Peter’s Cathedral.

Mr McKee’s coffin was carried from the church in a gun carriage, with men wearing the military-style black berets associated with the IRA part of the procession.

A eulogy was read at a memorial garden on the Falls Road, a short distance from the church.

A mourner said: “Billy remained steadfast to the end and had no regrets, despite all the hardship that he endured for his republicanism.

“For him it was not for a new Ireland or an agreed Ireland, it was for a 32-county independent republic that was declared at the front of the General Post Office in 1916.”

He was a former “Officer Commanding” of the IRA and involved with D Company of the organisation, the spokesman added.

Mr McKee was also a devout Catholic who went to Mass every day, and whose deafness meant his prayers were audible to other worshippers.

The address said: “We will remember you with pride.

“You were one in a million and a true republican to the end – unbowed, unbroken, and most of all – unrepentant.”

A beret and gloves were carried on a coffin draped in a green and yellow flag which bore the words “Erin Go Bragh”, expressing allegiance to Ireland.

An Irish bagpiper played and a crowd which had gathered on the street corner near the cathedral applauded.

His sister Theresa is the only surviving sibling and was among close relatives who attended the funeral.

Some mourners lit candles in his memory.

A priest at the service, Fr Michael Murtagh, said: “He was a known republican.

“We don’t deny it, nor do we glorify it, neither do we demonise it.

“We are not here to judge or condemn.”

He said nobody present wanted to add to the pain of many victims of the conflict over past decades.

“Neither are we here to add to the pain of his immediate family who are burying a brother, an uncle, a family member, with the respect that deserves.”

Mr McKee joined a republican youth organisation as a teenager.

He was later imprisoned.

In 1940 he was jailed for six years for treason and spent it in the Crumlin Road Jail.

The eulogy said: “This did not deter or shake his republican beliefs. Indeed it made him more determined to see an end to British rule in our country.”

The Civil Rights movement and demands for Catholic equality in 1968 catapulted Mr McKee to the forefront of the republican movement at a time when much of the IRA was moving towards communism.

The Belfast-based Provisional IRA demurred from the leftward shift and was to eclipse the rest of the organisation.

A gun was found in his car and he was imprisoned. He went on hunger strike for political status, which was eventually granted.

The address said: “He was involved in all levels of the republican movement carrying the fight to the Brits.”

He engaged with the British Government during the IRA ceasefire of 1975.

His leadership was “undermined” and in the late 1970s he was moved against, the address said.

“He stayed faithful, loyal to the Proclamation (of an Irish Republic) and the Republic which our dead patriots gave their lives for, unlike those who moved against him.”