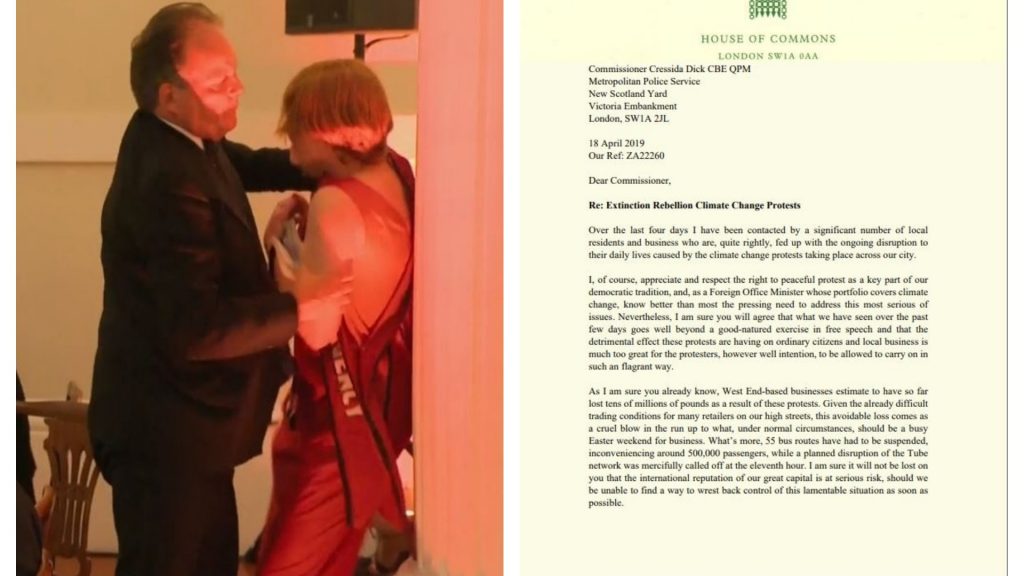 Mark Field, the Conservative minister facing criticism for grabbing an environmental protester, sent a letter in April urging police to “take a much firmer grip” on climate change demonstrations.

In the letter to Metropolitan Police chief Cressida Dick, the MP for the Cities of London and Westminster – who is facing a party investigation over the incident – complained that constituents were “quite rightly fed up” with the travel disruption caused by Extinction Rebellion protests.

Activists brought parts of the city to a standstill throughout the month in a call for net carbon emissions to be reduced to zero by 2025.

In the letter, Mr Field, who is also a Foreign Office minister, claimed businesses in the West End were estimated to have lost “tens of millions of pounds” as a result of the protests.

He wrote: “I, of course, respect the right to peaceful protest as a key part of our democratic tradition, and as a Foreign Office Minister whose portfolio covers climate change, know better than most the pressing need to address this most serious of issues.

“Nevertheless, I am sure you will agree that what we have seen over the past few days goes well beyond a good-natured exercise in free speech and that the detrimental effect these protests are having on ordinary citizens and local business is much too great for the protesters, however well intention[ed], to be allowed to carry on in such a flagrant way.”

He concluded that “I should be most grateful if, as a matter of urgency, you would take a much firmer grip on this problem and for the law to be applied to its full extent against those who, despite fair warning, insist on protesting in this anti-social way.”

City of London Police said they were looking into a “small number” of third-party reports of an assault following the black-tie Mansion House event.

Mayor of London Sadiq Khan said the footage was “truly shocking”, adding: “Violence against women is endemic in our society and this behaviour is unacceptable. He should consider his position.”

However, some MPs have come to the minister’s defence, including former soldier Johnny Mercer, who tweeted: “He panicked, he’s not trained in restraint and arrest, and if you think this is ‘serious violence’, you may need to recalibrate your sensitivities.”