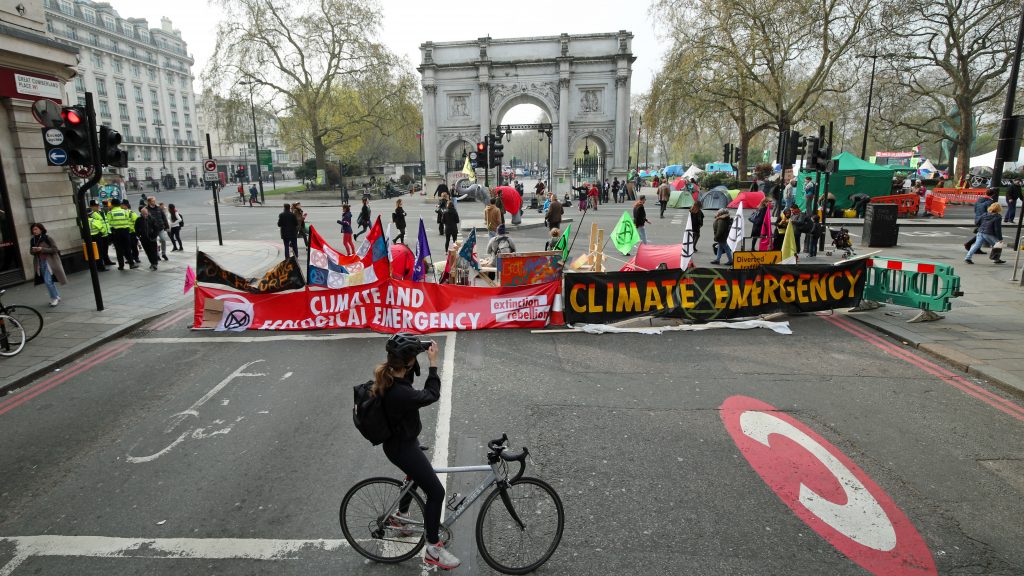 More than 20 climate change protesters have appeared in court charged with a public order offence after Extinction Rebellion demonstrations in central London.

The defendants were asked to enter guilty or not guilty pleas during hearings at City of London Magistrates’ Court on Friday.

The protesters, who range in age from 20 to 76, are accused of failing to comply with an order to stick to an allocated area near Marble Arch in central London.

The hearings, which are continuing into the afternoon in two court rooms simultaneously, have recorded a mixture of pleas, resulting in a number of trials scheduled for September and October.

More than 1,000 activists were arrested over the protest action that brought parts of central London to a standstill in April, and so far 232 files of evidence have been passed to the Crown Prosecution Service (CPS).

The Metropolitan Police said in May that they would push for all the 1,151 people arrested, including Olympic gold medal-winning canoeist Etienne Stott, to face charges.

So far 180 have been charged, one cautioned for outraging public decency and 32 released with no further action. The hundreds of others remain under consideration for charges.

Two courtrooms are being set aside for a day each week at Westminster Magistrates’ Court for 19 weeks to deal with Extinction Rebellion protesters.

The group’s tactics included asking volunteers to deliberately get arrested to cause maximum disruption at roadblocks on Waterloo Bridge, Oxford Circus and Marble Arch, while others glued themselves to trains and buildings.

The defendants appearing in court on Friday were charged with knowingly failing to comply with a condition imposed by a senior police officer under Section 14 of the Public Order Act 1986.

The youngest defendant, Peter Tyler, 20, of Muasdale, in Argyll and Bute, pleaded guilty to the offence relating to Waterloo Bridge on April 17 2019.

The oldest defendant Caroline Hunt, 76, of Alfred Place in Bristol, also pleaded guilty to the offence relating to Waterloo Bridge on April 21 2019.

Speaking outside court afterwards, Kitt said: “It’s beautiful to see everyone here showing such support for the cause.

“It’s been really nice having everyone around and it just shows the depth of the support that this cause really has.”

He said he entered a guilty plea due to the future costs of pleading not guilty.

“The fact that there were so many arrested, so many people having their days in court, definitely helps the cause I think.

“People willing to go through this shows that we’re serious about this subject,” he added.