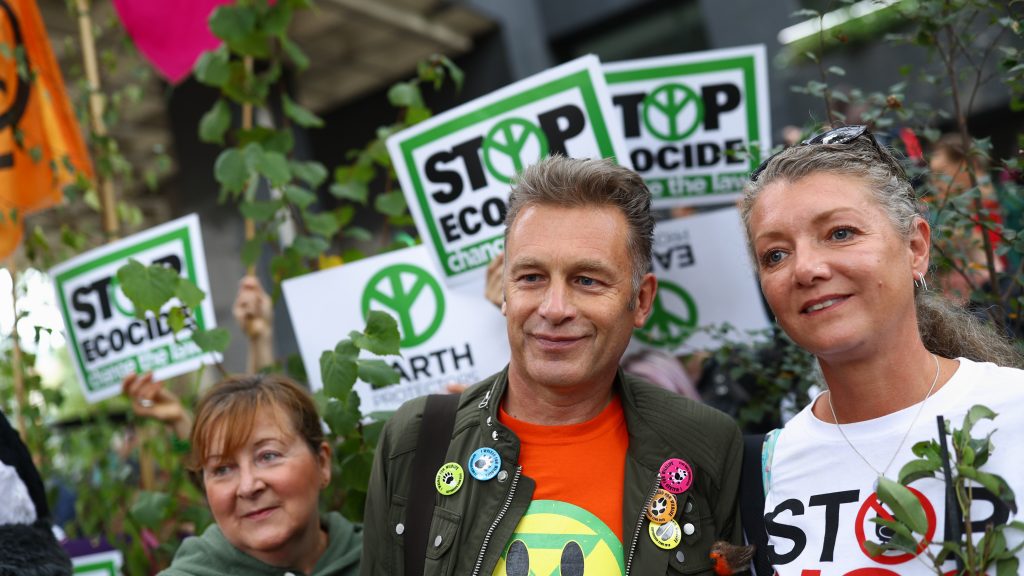 Chris Packham and climate protesters have set up a woodland outside the headquarters of HS2 to campaign against the destruction of trees to create the high speed rail line.

The naturalist was joined by around 200 people carrying flags and placards saying “Stop ecocide” and “Save our countryside”, while some chanted “HS boo”.

The protesters, including a pair dressed as a badger and a tree, brought an array of small trees and saplings to set up the woodland near Euston Station in central London on Saturday.

Packham said HS2 involves one of the “largest deforestation programmes since the First World War”, damaging more than 100 ancient woodlands along its planned route and destroying precious wildlife habitats.

He told protesters: “If this project progresses pending the review it will damage 108 of our ancient woodlands.

“I see these as natural and national treasures.”

The Government has ordered clearances of ancient woodland for HS2 must be stopped while the project is reviewed, unless they are necessary to avoid major costs and delays.

But Packham said he fears woodlands are still in jeopardy and that any damage caused to them before a final decision on HS2 is made would be “extraordinary vandalism”.

The presenter said he has launched legal action and received a response on Friday from the Government, which said the Department for Transport has divested responsibility for enacting any enabling works to HS2 Ltd but officials will make sure decisions are “sensible”.

He told the PA news agency the department also said he would be given advance notice of any enabling works, but not how far in advance this would be.

He said he is “dissatisfied” with the response and will be talking to his lawyers about ways of stopping any enabling works, including further legal action and campaigning.

Packham said the final HS2 decision will be the first big test for the Government since it declared a climate emergency.

He added: “This is a project that will be damaging to the climate and environment. As a consequence of that this is a potential game-changer.

“It’s very important we try to win this cause and send a clear message we are no longer prepared to put up with things that damage our climate or environment.

“If it wasn’t this it would be the third runway (at Heathrow).”

Earlier this month, Transport Secretary Grant Shapps told HS2 Ltd – the company building the high-speed railway – to assess what removals can be halted until after the inquiry led by the firm’s former chairman Douglas Oakervee is completed.

All other preparatory works will continue during the review.

Mr Oakervee’s review was commissioned by the Government and is analysing whether and how the project should continue.

The final report will be completed in the coming months and will inform the Government’s decisions on next steps for HS2.

Mr Shapps published a report by HS2 Ltd chairman Allan Cook which warned the final phase of the railway may not open until 2040 and the project could cost £88 billion based on 2019 prices.