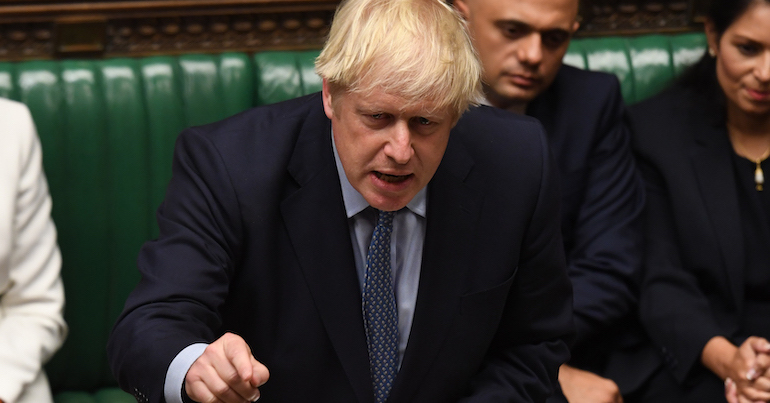 A new report from an independent thinktank has found that Boris Johnson’s “desire to radically overhaul” the tax system will cost us billions of pounds every year. And it will only benefit the very richest people. It also seems confirmed that Johnson hurtling the UK towards a no-deal Brexit is down to pressure from billionaire investors.

On 27 September, the Institute for Fiscal Studies (IFS) reported that Johnson’s proposed tax changes are:

big – and costly – reforms, both of which will predominantly help those in higher-income households.

As the IFS noted, Johnson’s proposal to raise “the higher-rate income tax threshold” is:

a substantial and expensive tax cut from which only those on high incomes would gain.

As Business Insider reported, overall these plans “would cost the government up to” £20bn but only benefit the rich. In addition, these cuts also remove billions from the economy. Shadow chancellor John McDonnell slammed the plans, saying:

These proposals… will rip out £10 to £20 billion a year from our already decimated public services… and put those billions into the pockets of the rich.

This government cannot be trusted with our public services – only a Labour government will end austerity and establish a fair tax system that serves the many, not the few.

As he also noted, these plans mean the rich get richer:

Boris Johnson's tax plans will place billions of pounds into the pockets of Britain's richest people https://t.co/uTMIcAcvg1 via @businessinsider

So, as Jeremy Corbyn quite rightly pointed out, there’s another knock-on effect of these proposals:

This is why Boris Johnson's election campaign will be swimming in cash from super-rich donors.https://t.co/LoqenWsEUJ

Yet, this isn’t the only way Johnson’s benefitting the billionaires. As The Canary reported on 26 September, his sister Rachel Johnson said that Johnson’s current political strategy could be the result of pressure from:

people who have invested billions in shorting the pound, or shorting the country, in the expectation of a no-deal Brexit.

On 28 September, former chancellor Philip Hammond also seemed to confirm this story in the Times:

Philip Hammond, ex-Chancellor, seriously suggests in today’s Times that one reason the Prime Minister may want a hard Brexit is so that his backers in the City don’t lose billions — corruption on a scale I wouldn’t dare put in fiction pic.twitter.com/BJEDB1m3vq

Given widespread concerns raised by fmr Chancellor Philip Hammond’s comment today about Johnson’s speculator sponsors profiteering from no deal Brexit I am writing to Mark Sedwill, Cabinet Secretary, to seek a Cabinet Office investigation into this potential conflict of interest. pic.twitter.com/jUzj0KMgTY

As Carole Cadwalladr also noted, this isn’t a new story either:

What I don’t understand is why serious financial journalists have not even attempted proper investigation of this. It’s a matter of public record that a) Johnson backed by hedge fund owners & b) same funds donated to Vote Leave & made billions on Brexit https://t.co/NbrjSG9mTT

And as one Twitter user stated, Johnson truly is a “stooge” for disaster capitalists:

Rachel Johnson suggests that her brother Boris Johnson, may be under pressure from forces seeking to make £billions from shorting the pound in a no-deal Brexit, as an explanation for his behaviour. He’s a stooge of the disaster capitalists, not a man of the people.

Taken alongside Johnson’s proposed tax cuts, the Conservative agenda becomes clearer than ever:

Tax cuts for the rich.
Further cuts for public services…

The choice remains.
Tories for the few.
Labour for the many!

So it’s clearer than ever quite how important the next general election is. This is our one chance to make sure that we rise up, unite, and elect a Corbyn-led government. Because if we don’t, the gloves are well and truly off to protect the richest elites. Meanwhile, the past nine years of Tory-led austerity may almost seem gentle in comparison to Johnson’s brutal plans.