When the DUP attacked Jeremy Corbyn, it left out what the British people really need to know - Canary 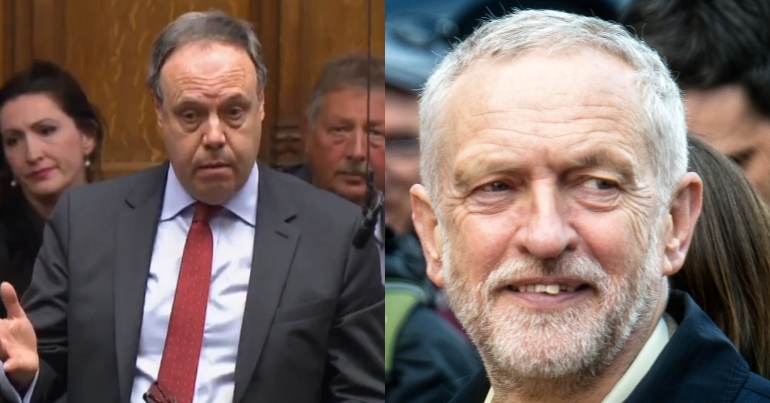 On 25 September, DUP MP Nigel Dodds launched a false and hypocritical attack on the leader of the Labour party Jeremy Corbyn.

After Corbyn praised the 11 Supreme Court judges who ruled that proroguing parliament was unlawful, Dodds turned this into an attack on Corbyn. He claimed Corbyn “supported a terrorist organisation that murdered judges” during the conflict in the north of Ireland. He then said Corbyn should have put his words “into action much, much earlier in his career”.

Instead of making ridiculous claims about Corbyn’s past, the DUP would be better off examining its own role in the conflict in Ireland. It should examine how its founder Ian Paisley whipped up anti-Catholic sentiment in Ireland through his words. Paisley did the same through his involvement in the Ulster Resistance movement where he called on:

The DUP should also examine its more recent connections to terrorists. This is the truth that British people need to know to get a more complete understanding of the armed conflict in Ireland.

We’ll say nothing about the lady looking over your right shoulder, Nigel, nor the guns her father supplied to Ulster Resistance, founded by DUP. Or the gent over your left shoulder who called a UDA document calling for ethnic cleansing “a valuable return to reality”. Lips sealed. https://t.co/AAdSu5CzZq

Dodds’ statement was both out of order and false. This is because Corbyn never supported terrorism nor the use of force by any side. In fact, Corbyn worked for peace in Ireland and supported the Good Friday Agreement (GFA), which brought peace to Ireland in 1998 after a 30-year armed conflict.

I condemn what was done by the British Army as well as by other sides as well.

I condemn all the bombing by both the loyalists and the IRA.

Dodds is a hypocrite

Key figures in the DUP were involved in the formation of the paramilitary group, Ulster Resistance. The Ulster Resistance, whose beginning Nigel Dodds played a role in, was described as a “secret army”.

So if Dodds wanted to attack someone’s ‘terrorist past’, he need have looked no further than his own party. In fact, Dodds could have delivered that same speech to his party colleague MP Sammy Wilson, sitting on the bench behind him. On 10 November 1986 in Belfast, and as lord mayor of the city, Sammy Wilson presided over that Ulster Resistance rally.

What’s more, unlike Jeremy Corbyn, the DUP consistently opposed the GFA. And even though it finally agreed to shared power with Sinn Féin in 2007, it still hasn’t fully accepted the GFA. So when the current DUP leader Arlene Foster says the GFA is ‘not sacrosanct’, it’s hardly surprising.

The real threat to peace and democracy

Those in the Commons and beyond who refused to accept Boris Johnson’s proroguing parliament were right. Johnson’s action was both unlawful and a disgraceful attack on democracy.

So baseless attacks like this one from Dodds, or any other MP for that matter, are designed to confuse and distract from such attacks. His present day comments, and the past actions of his party, show how unfit he and his colleagues are to have a role in government.