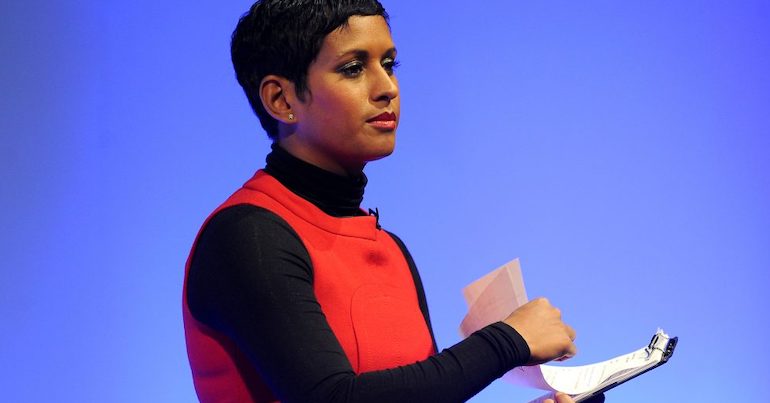 This story was updated on 29 September at 12.20 pm to include a statement from the BBC.

Minority staff and presenters at the BBC have been told by the corporation not to join in any form of protest supporting presenter Naga Munchetty, it is reported.

The paper quotes Trevor Phillips, broadcaster and former chairman of the Equality and Human Rights Commission, as saying the BBC had instructed staff to not sign any petition or letter supporting Munchetty, a move Phillips says could lead to claims of harassment.

This comes after stars including comedian Sir Lenny Henry complained to the BBC, in a letter published in the Guardian, over its rebuking of Munchetty for saying US president Donald Trump’s call for a group of women to go back to their own countries was “embedded in racism.”

A petition calling on the BBC to reverse its judgement on Munchetty has attracted more than 10,000 signatures.

“BBC minority staff are being told not to sign the letter or any petition and to stay clear of this one,” Phillips told the Sunday Times.

He added such warnings would breach the 2010 Equality Act, meaning staff could have a claim for harassment.

“The first thing the director-general has to do is tell managers to back off,” Mr Phillips told the paper.

A letter to the corporation, signed by Henry, Gina Yashere, Adrian Lester and dozens of other high profile black Britons, told the BBC its position in rebuking Ms Munchetty was “deeply flawed” and “illegal”.

It also said certain signatories to the letter had been contacted separately by a number of BBC journalists to “express their concern at a climate of fear” at the organisation.

In upholding a complaint against Munchetty, the BBC ruled she had crossed a line on editorialising when in a July breakfast broadcast she commented on the statements directed by Trump towards politicians Ilhan Omar, Alexandria Ocasio-Cortez, Rashida Tlaib and Ayanna Pressley.

Munchetty told co-presenter Dan Walker: “Every time I have been told, as a woman of colour, to go back to where I came from, that was embedded in racism,” adding: “I’m not accusing anyone of anything here, but you know what certain phrases mean.”

Questioned further by Walker, she said she was “absolutely furious a man in that position thinks it’s OK to skirt the lines by using language like that”.

In upholding the complaint the BBC said: “Overall her comments went beyond what the guidelines allow for.”

Subsequently, the BBC’s Executive Committee was moved to send a message to employees clarifying its stance on the case and on racism – saying Munchetty she was justified in saying that telling someone to go back home was racist.

The message said in part:

The BBC is not impartial on racism.

Racism is not an opinion and it is not a matter for debate. Racism is racism.

Naga Munchetty – one of our stars – was completely within her rights to speak about the tweets of Donald Trump which have been widely condemned as racist.”

The BBC is fully committed to complying with the Equality Act, and we’re not aware of any failure to do so. We know there has been a lot of debate on the issues raised last week, but the statement from the executive team on Friday is clear, the BBC is not impartial on racism. Racism is not an opinion and it is not a matter for debate. Racism is racism.  Naga has the very clear support of the top of the organisation.

Many figures from the world of broadcasting and politics have spoken out on the decision – and broadcasting watchdog Ofcom will also assess what was said against its own broadcasting rules.

Chancellor Sajid Javid tweeted the situation was “ridiculous”, adding: “It’s perfectly understandable why she said what she did”, while Labour’s Clive Lewis has tabled an early day motion in Parliament condemning the BBC’s “perverse” decision.