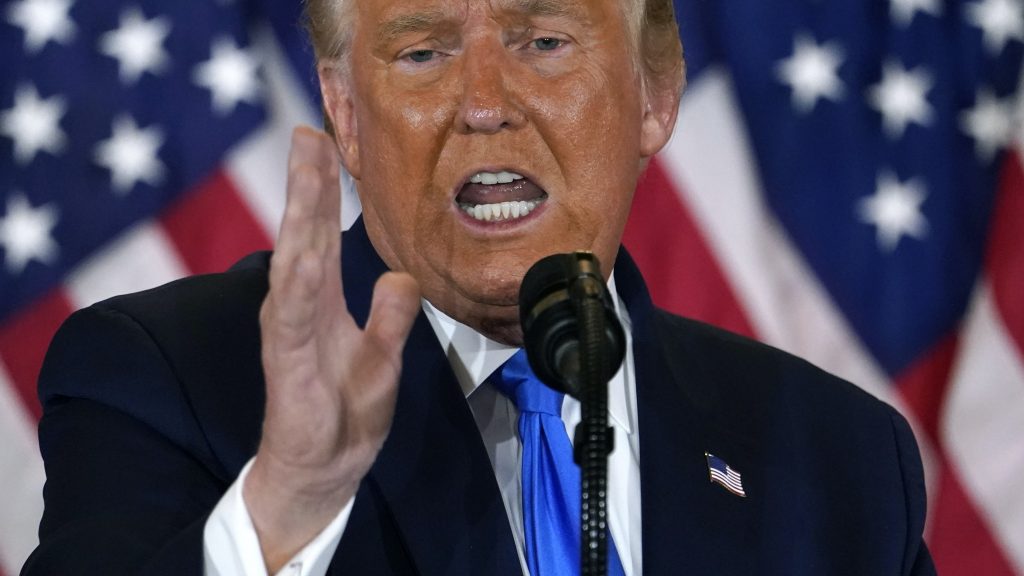 US President Donald Trump has called the US election results “a major fraud” and vowed to take the process to the Supreme Court.

Mr Trump cried foul over the election results during an appearance before supporters at the White House early on Wednesday morning and made premature claims of victory in several key states.

But there is no evidence of foul play in the cliffhanger and it is unclear exactly what legal action Mr Trump might try to pursue.

Several states allow postal votes to be accepted after polling day, as long as they were postmarked by Tuesday. That includes Pennsylvania, where ballots postmarked by November 3 can be accepted if they arrive up to three days after the election.

Mr Trump suggested those ballots should not be counted. But Mr Biden, briefly appearing in front of supporters in Delaware, urged patience, saying the election “ain’t over until every vote is counted, every ballot is counted”.

Four years after Mr Trump became the first Republican in a generation to capture that trio of states, they are again positioned to influence the direction of the presidential election.

Focus has moved to the so-called “rust belt” after Mr Trump carried Florida along with the other crucial swing states of Texas, Iowa and Ohio, where Mr Biden had made a strong play in the final stages of the campaign.

The tight overall contest reflected a deeply polarised nation struggling to respond to the worst health crisis in more than a century, with millions of lost jobs, and a reckoning on racial injustice.

Mr Trump and Mr Biden have spent the better part of this year in a heated fight over how to confront those challenges, and each has argued in apocalyptic terms that his opponent would set the country on a devastating path.

By early on Wednesday, neither candidate had the 270 electoral college votes needed to win.

Mr Biden, briefly appearing in front of supporters in Delaware, urged patience, saying the election “ain’t over until every vote is counted, every ballot is counted”.

“It’s not my place or Donald Trump’s place to declare who’s won this election,” Mr Biden said. “That’s the decision of the American people.”

Millions of voters braved their worries about coronavirus – and some long queues — to turn out in person, joining 102 million fellow Americans who voted days or weeks earlier, a record number that represented 73% of the total vote in the 2016 presidential election.

Early results in several key battleground states were in flux as election officials processed a historically large number of postal votes. Democrats typically outperform Republicans in postal voting, while the Republicans looks to make up ground in polling day turnout. That means the early margins between the candidates could be influenced by which type of votes – early or election day – were being reported by the states.

Mr Biden won several states where Mr Trump sought to compete, including New Hampshire and Minnesota. But Florida was the biggest, fiercely contested battleground on the map, with both campaigns battling over the 29 electoral college votes that went to Mr Trump.

The president adopted Florida as his new home state, wooed its Latino community, particularly Cuban-Americans, and held rallies there incessantly. For his part, Mr Biden deployed his top surrogate – former president Barack Obama – there twice in the campaign’s closing days and benefited from a 100 million US dollar pledge in the state from Michael Bloomberg.

Control of the Senate is at stake, too. Democrats need to net three seats if Mr Biden captures the White House to gain control of all of Washington for the first time in a decade. But Republicans maintained several seats that were considered vulnerable, including in Iowa, Texas and Kansas.