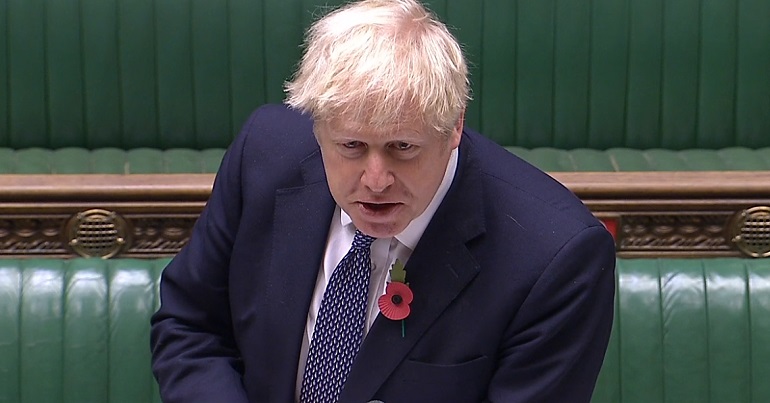 It’s almost as if Boris Johnson was hedging his US election bets during Prime Minister’s Questions (PMQs) on Wednesday 4 November. Because the PM did not condemn some really dodgy remarks by the current president of the US.

The only “fraud” is the current president

Over in the US people have been calling out Donald Trump. CNN reported that he was “preparing to declare victory”. Trump said:

We were getting ready for a big celebration. We were winning everything. And all of a sudden it was just called off

This is a fraud on the American public. This is an embarrassment to our country

Trump claimed he would go to the US Supreme Court to get “all voting to stop”. Of course, this was nonsense. Even BBC News admitted when Trump said this there were still:

The president has not presented evidence of any fraud.

Back in the UK, Labour leader Keir Starmer brought Trump’s comments up at PMQs. He said:

Whatever the result, will the Prime Minister join me in saying that it’s not for a candidate to decide which votes do and don’t count, or when to stop counting. The next president must be the free and fair choice of the American people.

Oh, Starmer. As if Johnson would agree with that statement. The PM said:

We don’t comment as a UK government on the democratic processes of our friends and allies… and I don’t think in all seriousness he would expect otherwise.

Of course, the UK government is quite happy to “comment” (and wilfully interfere) in the “democratic processes” of other countries, like Venezuela. As long as they’re not an ‘ally’ – to corporate capitalism.

All a bit Trumpian?

If this election was in any other country, Trump's premature claim of victory would have been condemned

But our spineless foreign secretary won't even call it what it is – an attempted coup#USAElections2020 https://t.co/lFLvgbvBxC

Sadly, this is not Raab being “spineless”. This is him and Johnson keeping their options open. It’s also because, as journalist Nadine Batchelor-Hunt said, Johnson’s government is all a bit “Trumpian”:

If Biden wins, the relationship between Johnson & Biden will be fascinating

How that will translate to relations, especially when we’re begging for a Brexit deal, will be interesting

And as she summed up:

Johnson, however, is not a principled politician – if it were political convenient to behave more like Biden, he would, he just goes where the wind goes

I predict that if Biden wins, it will have a reining in effect on Johnson and the more radical fringe of Brexit

Indeed. Because there was another telling moment from Johnson during PMQs.

The debate between the PM and Starmer centred once again around coronavirus (Covid-19). Former ITV News presenter Alastair Stewart summed it up well:

#PMQs
So much of it was a re-run of what was said when #Lockdown2 was announced. https://t.co/rn4Vn9H342

But what was interesting was who Johnson referenced at one point.

what he should do is actually take a leaf out of the Blair book… And by the way, I can tell him that Tony Blair would not have spent four years in the same shadow cabinet with Jeremy Corbyn, standing shoulder-to-shoulder with him.

Of course, Starmer has created this problem for himself. He pretended to support Corbyn in his shadow cabinet and then tried to appease the people who wanted to destroy him once he became leader – culminating in the decision to suspend Corbyn from the Labour Party.

So, would Johnson support Blair-like Joe Biden if he was elected? Possibly. As Raab said on Sky News:

The UK-US relationship is in great shape, and we’re confident that it will go from strength-to-strength whichever candidate wins the election.

Time will tell if that ends up being true. But it seems clear that Johnson’s government will mould itself to fit either another four years of Trump or a new era under Biden. Either way, it may not end well for the rest of us.