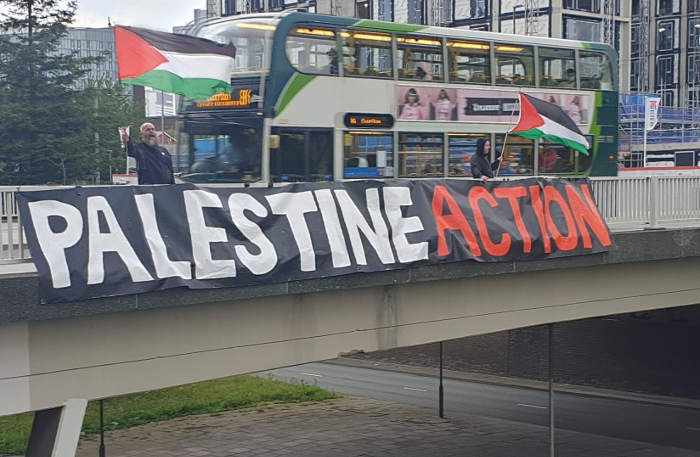 UK Palestine solidarity campaigners have taken coordinated direct action across the UK to mark the anniversary of the Balfour Declaration.

The Balfour Declaration is the name given to the statement in 1917 by British foreign secretary lord Balfour promising a “national home for the Jewish people” in Palestine. Britain had taken control of Palestine after the collapse of the Ottoman Empire. That “national home” was to be created at the expense of the indigenous Palestinian population. According to a press release from campaign group Palestine Action:

This 67-word document presented by Arthur Balfour in 1917 paved the way for the ethnic cleansing of Palestine and the violent dispossession of 750,000 Palestinians —more than half the indigenous population. This event is known as the Nakba, which directly translates into English as the ‘great catastrophe’.

The day of action was aimed at exposing the British state’s present day complicity with Israeli war crimes. According to Palestine Action:

Not only has the UK played a crucial role in the immoral colonisation of Palestine, they actively profit off the systematic ethnic cleansing of the Palestinian people by trading with, and hosting, Elbit Systems — a company which openly markets its weapons as “battle tested ” on Palestinian civilians.

On 2 November, the 103rd anniversary of the Balfour Declaration, activists visited Elbit’s locations in Oldham and Tamworth, smashing windows and spraying the building with red paint – symbolising the blood of the Palestinians killed with the company’s equipment:

Palestine Action begin their #BalfourDay campaign against Israel's Elbit with overnight visits to two of their UK-based factories #ShutElbitDown https://t.co/WNerwz129U

Palestine Action tweeted a video of the activists’ night-time visit:

Activists #ShutElbitDown on the anniversary of the Balfour Declaration in Shenstone: legal observers pepper sprayed by police & arrested pic.twitter.com/PM2Gj0m7j2

Elbit systems, Israel’s largest private sector arms manufacturer, is exporting the drones that it has battle tested on the bodies of Palestinians in Gaza to countries around the world, including the UK. According to Palestine Action:

Both the UK Maritime and Coastguard Agency, as well as the UK police, have been trialling Elbit’s drones to mass-surveil large stretches of our coastline, in line with Priti Patel’s militarisation of the English Channel.

The EU’s border agency Frontex has also contracted Elbit to surveil the Mediterranean, leaving the lives of migrants, refugees and asylum seekers, fleeing war torn countries, in mortal danger. In fact, the EU was recently accused of “watching” migrants drown rather than investing in ways to save them.

Elbit Systems has also played a key role in the development of Trump’s militarised US/Mexico border wall, while the very same technologies are also being used to securitise and control the native O’odham people on Arizona’s indigenous reserves.

Protests were also held all over Palestine to commemorate the British betrayal of Palestinians. The International Solidarity Movement tweeted:

Palestinians in Ramallah protest on the 103rd anniversary of the colonialist Balfour Declaration. Local, national, civic, and women's organizations took part in the march, which called for an end to the Occupation and the release of Palestinians held prisoner by Israeli forces. pic.twitter.com/BxDlTRLx4j

The actions marking the anniversary of Balfour’s 1917 declaration are a stark reminder that British colonial policy prepared the way for the ethnic cleansing of Palestine. Buying weapons from companies like Elbit, and continuing to arm Israel, means that the UK’s complicity in the occupation is ongoing.