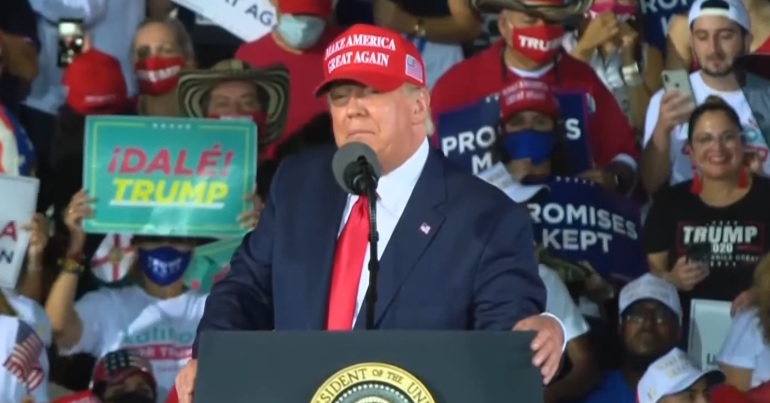 Florida is quite literally in the eye of the storm when it comes to the climate crisis. Rising sea levels, hurricane seasons that are now off the scales in terms of their intensity and frequency, crashing biodiversity – all of these pose very real threats to the state. Nonetheless, when Floridians cast their votes for the 2020 presidential election, a majority backed the climate-change-denier-in-chief and serial offender against the environment, Donald Trump.

Thankfully, not all states in environmental dire straits followed suit.

As the Guardian reported in April:

By any estimation, Florida is drowning. In some scenarios, sea levels will rise up to 31in by 2060… The pace of the rise is also hastening, scientists say – it took 31 years for the waters around Miami to rise by six inches, while the next six inches will take only 15 more.

In fact, a 2018 study showed that Florida has the most to lose from rising sea levels among all US states. Meanwhile, it faces a “immediate and dire threat” from the hurricane season, according to the Climate Reality Project. This threat was illustrated in 2018 when Hurricane Michael headed Florida’s way, leaving devastation in its wake. The climate crisis is also reeking havoc on the state’s biodiversity, threatening the ecosystems on which communities depend.

On social media, people were less than impressed:

Recent national polls on climate change showed that there is significant and growing concern about the climate crisis among US voters. But climate concerns among Trump voters are significantly lower than they are for people who favour Joe Biden.

Analysis of data on early ballots suggested that “eco-conscious” voters in key states like Florida could swing the results. It was expected that such voters would back Biden, as the Democratic candidate made a number of pledges on climate action during the election, in contrast to Trump’s steadfast anti-environment positions. Clearly that didn’t happen in the Sunshine State. But Biden did secure a dramatic win in Arizona, another key battleground. As Aljazeera reported, the state has been a “bulwark of Republican support for decades”. But the Democrats managed to flip it and turn the red state blue for the first time in 24 years.

Back in 2017, predictions put Arizona’s capital Phoenix on course to be ‘almost unliveable’ by 2050, thanks to the climate crisis. The city saw a record-breaking number of days hitting high temperatures in 2020. As Laura Jimena Dent, the executive director of the Arizona-based environmental justice organisation Chispa, recently told the Guardian:

We are a desert community… We are literally at the crossroads of the climate crisis.

Arizona is also a state that hosts Trump’s controversial border wall, which is drawing huge criticism for its negative impact on wildlife and biodiversity. Unsurprisingly then, Biden’s win there is seen as a climate victory:

Arizonans are living with raging fires and record high temperatures—tonight they voted for a climate champion and a new era of bold action ⚡️ #Election2020 #AZSen pic.twitter.com/CTEiJdzfci

So excited to see this big Senate win in AZ! @CaptMarkKelly has proposed tripling the number of renewable energy jobs in Arizona to help fight the climate crisis and put people back to work.

Let's get to work.

Moving too slowly in the right direction

In short, the US election suggests that there is movement in US public opinion on the climate crisis. For the most part, that movement is in the right direction, with more and more people recognising the existential threat it poses. But that progress is happening way too slowly, given the rapid pace of environmental change happening now, right before our eyes.

Indeed, progress may be happening too late to save Florida from being lost to the sea. Although that is in effect what 5+ million Trump voting Floridians just essentially let themselves in for.