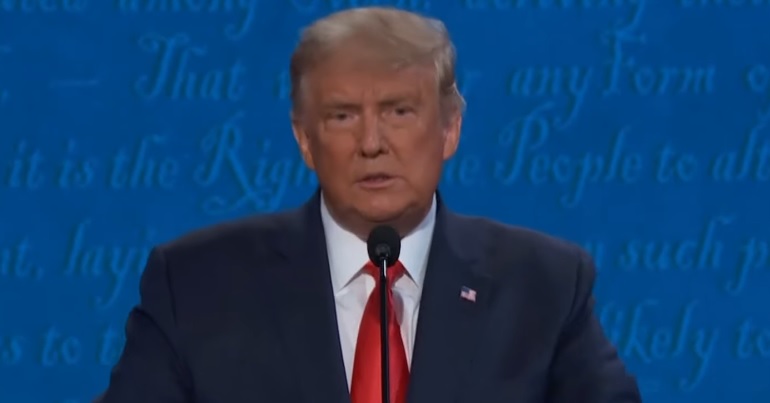 Donald Trump’s first term as president is drawing to a close. To assist US voters currently deciding on whether to elect him for another four years, The Canary decided to take a closer look at his environmental legacy. We sat down with Brett Hartl, who spoke on behalf of the Center for Biological Diversity Action Fund to talk about the president’s record on climate and biodiversity issues.

That record is perhaps best illustrated through the number of lawsuits the Center for Biological Diversity has mounted against Trump’s administration over environmental issues. That number stood at 237 on 21 October when we spoke to Hartl. The Center has launched at least one further lawsuit, against Trump’s huge expansion of hunting and fishing on protected lands, since then. That’s right, at least 238 lawsuits in the space of under four years.

For a US public that appears to be increasingly concerned about the climate, that’s essentially 238 reasons to show Trump the door.

During the 2020 election campaign, Trump has been trying to whitewash his environmental record. Nonetheless, it’s largely regarded as his weak spot. Because, prior to Trump’s attempt to rewrite history during the 2020 campaign, he’s been consistently abysmal on environmental issues since entering politics.

As Hartl says, during his 2016 campaign for the presidency, Trump would “welcome the radical right-wing talking” points on such issues. His early comments on climate change, calling it a hoax, are a prime example. Trump also moved swiftly on putting his nightmare environmental positions into action. Hartl pointed out:

Some of the very first executive orders he did in 2017 were all anti-environment. Dismantling national monuments, this two for one deregulatory order, expediting the Keystone XL pipeline…. Right from out of the gate, he was 100% anti-environment.

As media outlets have summarised in the lead up to the 2020 election, Trump’s administration has taken a sledgehammer to the US’ environmental protections during his time in office. The New York Times reported that he has put in motion the reversal of nearly 100 environmental policies over the last four years. The rollbacks have weakened standards on air and water pollution, removed protections for wetlands, public lands and wildlife, reduced safety-based rules relating to toxic chemicals, and much, much more.

Trump is also pulling the US out of the Paris Climate Agreement. As journalist Jeremy Scahill recently noted on the Intercepted podcast, Noam Chomsky said this move leaves the US as:

the only country in the world which is refusing officially to take even small steps towards dealing with the true existential crisis, and that’s combined with the domestic programs of rapidly increasing the use of the most dangerous fossil fuels, cutting back regulations on economy for automobiles, eliminating safety protections for workers, and so on. All of that is just a race to disaster and that’s by far the most serious of the initiatives to undermine what’s loosely called the international order.

For big business, not the people

During his campaign, and after the election, Trump claimed such changes would bring prosperity and security to US citizens. Essentially, his administration spouted the same old tired neoliberal talking point that regulations are a barrier to industry. So scrapping them would boost businesses and therefore jobs in the US. That hasn’t panned out in practice. Because, as Hartl said, the administration’s justifications for stripping away protections for the climate and biodiversity were a “rhetorical fantasy”, not grounded in fact. The Center for Biological Diversity Action Fund’s Hartl argued:

there’s no data that suggests that any of it actually helps jobs. It certainly helps some of the companies bottom line profits. But installing or not installing a pollution control technology in of itself doesn’t create or reduce jobs, it just affects how much money they make.

The same is true of wildlife regulations, Hartl says. He asserts “there’s no endangered species that really costs jobs at the end of the day”. He notes that:

that doesn’t mean there’s no cost for environmental compliance, I’m not trying to say that. But the reality is that most of it is already baked in, and most of it is something that if you plan for you can deal with.

Trump has appeared more than eager to push through short-sighted rollbacks that are great for big businesses’ bottom line but terrible for the environment and, ultimately, people. But it would be naive to lay them all at his feet. As Hartl said:

there’s very little daylight between the Republican Party and industry, and that’s been the case for many years. They have pushed industry’s agenda pretty steadfastly and they had a golden opportunity with Trump

Essentially, the Republican Party found itself with a president who “doesn’t really care about the details” and, as a result, could get to work on fulfilling its wildest dreams. Hartl says Trump “gets the big picture ones from a rhetorical, ideological perspective” but not the nuances or complexities of rolling back these protections. So he asserts:

with Trump it’s a free-for-all because there’s no-one in the White House that cares about the details. That doesn’t matter. If industry’s happy, they’re happy… there’s no check on their worst impulses.

As already mentioned, the Center for Biological Diversity has brought at least 238 lawsuits against the Trump administration over its anti-environmental policies. The Center is one of many entities, including states, that have taken legal action during his time in office. These legal challenges have halted some of Trump’s assaults on the natural world. Further damaging policies could face the same fate when currently ongoing lawsuits reach their conclusion.

But ultimately it would take a new president with different priorities to turn back the tide on many of Trump’s anti-environment actions. Hartl commented:

If Biden wins, and they’re really aggressive, they could probably undo most of it in a year or two. But they’ve got to come in with the same urgency that Trump did

Whether Biden will come in with that sense of urgency, if elected, is the “big unknown”, Hartl said. Biden is ‘saying the right things’, he said, but like Barack Obama in 2008, the Democrat would be taking office amid an emergency. Obama’s emergency was a recession, thanks to the financial crisis. Biden’s would be the pandemic. There are also other issues, such as civil rights and police brutality, that the US is grappling with right now. So Hartl says he’s hopeful that Biden would address some environmental issues early on, but many of them may not be front and centre in his initial days in office.

There’s also a ‘big unknown’ on whether Biden would have a sense of urgency on reforms needed in wildlife policy too. Persecution of wildlife in the US is rife. The federal agency euphemistically called Wildlife Services, which is part of the Department of Agriculture, killed 1.5 million native wild animals in 2018. In 2019, the death toll, which is largely done to benefit agricultural interests, stood at around 1.2 million.

As Hartl points out, the law behind this lethal management of wildlife has been on the books for a long time. But past Democratic presidents didn’t reform the programme:

Wildlife Services has been around for decades doing terrible things. Irrational, pointless, just horrific things. There is a law that lets them do it and unless you have a president that actually cares about wildlife, we can push them at the margins, but it’s much better if you have the administration itself caring. But the Obama people didn’t and they had eight years. The Clinton people didn’t, they had eight years.

In fact, the Trump administration has locked its sights on one species in particular: the wolf. Although the total population of wolves across the states they live in totals around just 6,000, Trump is removing endangered species protections for most of them by the end of the year. But, as Hartl highlights “the Obama people wanted to delist wolves nationwide in 2013″.

From the bottom up, not the top down

So even if Biden does win the presidency, it’s unlikely to be plain sailing for the environment, the groups who advocate for it, or the millions of people in the US who depend on it. But it would curb some of the worst excesses of the unbridled ‘free-for-all’ that the country, and the world, has seen under Trump’s presidency.

Biden has at least said he’ll listen to scientists if elected. Trump appears to think listening to scientists is a matter for derision. But having a US president who listens to the science on the climate crisis would, of course, be a good thing. Having one who would listen to citizens would be great too. Increasingly, US citizens are concerned about the climate emergency and want their elected representatives to do something about it. Many of them also opposed Trump’s plan to expand hunting and fishing on protected lands, although the administration ignored their views. In Colorado, meanwhile, citizens look likely to vote for the reintroduction of wolves to the state in an upcoming poll. It’s the first time voters have had the opportunity to vote for an endangered species’ reintroduction:

This November, we can change the course of history for #wolves! Coloradans have an opportunity to vote YES on Proposition 114 to bring back the wolf & help restore the natural balance to the state for future generations. Learn more: https://t.co/JZPKnNhuxn #RestoreTheHowl pic.twitter.com/Xcf49Na9gj

Getting Biden to follow the lead of civil society and scientists on the climate crisis, as opposed to bowing to the Democratic Party’s corporate backers, won’t be an easy task. But, as his record shows, people stand absolutely zero chance of achieving that with Trump.