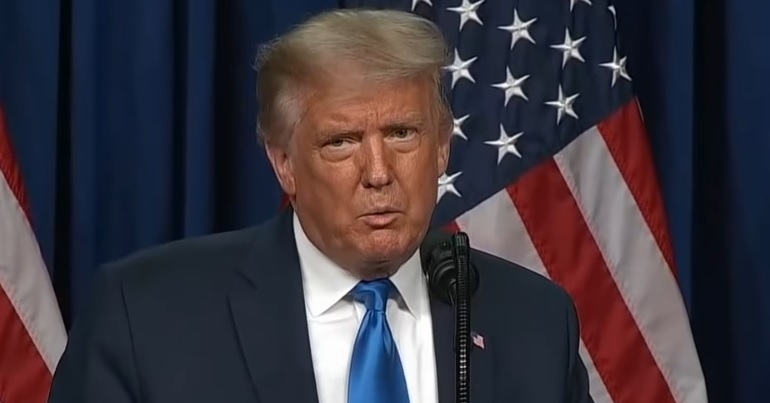 To say Donald Trump is poor on climate issues would be a gross understatement. So numerous are his administration’s attacks on the environment that it’s difficult to select just a couple of illustrative examples. But perhaps the danger he poses to a healthy planet is best summed up by his government’s attempt in 2019 to rebrand fossil fuels – the burning of which is the primary driver of global warming – as “molecules of US freedom”.

As such, the vote of any citizen who prioritises climate issues is unlikely to be ‘in the bag’ for Trump. Unfortunately for him then, a new survey shows that the climate crisis is an increasing concern for US voters. It also reveals that the number of people most likely to vote on the basis of those concerns has reached an “all-time high”. Meanwhile, environmental groups have slapped the Trump administration with lawsuits for three consecutive days since 24 August, keeping his climate record high on the national agenda.

All of this is terrible news for Trump.

Researchers at Stanford University, ReconMR, and Resources for the Future carried out the Climate Insights survey. Stanford’s Jon Krosnick, who led the project, has been exploring US public opinion on the issue through surveys since 1997. The 2020 poll surveyed 999 US adults over an 80 day period from May to August.

As the New York Times pointed out, social scientists may have expected public concern for the climate to diminish this year. Because the “finite pool of worry” hypothesis suggests that when worry over one issue rises, it falls about others. But that doesn’t appear to be the case with the coronavirus (Covid-19) pandemic and the climate crisis. Despite the former, concern for the latter has stayed strong.

For example, support for more government action to tackle global warming has held at 68%, the same as in 2018. 82% of people said that the government should do “at least a moderate amount” to deal with the problem, which is an “all-time high”. That’s no small feat when considering that the US public have been led by a climate change denier since 2016.

Meanwhile, growth in the group Krosnick describes as the “issue public” has been ‘striking’. The Climate Insight report explains that the issue public is a group that pays a lot of attention to a particular matter, and are likely to take action – such as voting – on the basis of it. In the 2020 poll, the global warming issue public amounted to 25%. This was another “all-time high”, up from 9% in 1997 and 13% in 2015. As the report said:

a growing body of people care deeply about climate change and may be likely to cast their votes based on candidates’ climate policy platforms.

US voters who do care about the climate crisis were provided with ample evidence this week of why Trump is not their ideal candidate. His administration faced a new lawsuit on three consecutive days over its various assaults on the environment. The Center for Biological Diversity, the National Audubon Society, Natural Resources Defense Council, and Friends of the Earth filed a lawsuit in federal court on 24 August to challenge Trump’s plan to open up Alaska’s Arctic National Wildlife Refuge to fossil fuel exploration.

On 25 August, the Center also joined Friends of the Earth, Stand.Earth, and the National Audubon Society in legal action against another drilling plan in the National Petroleum Reserve-Alaska, an 18.7m acre area of the Western Arctic. Rebecca Noblin, staff attorney at Earthjustice – the non-profit environmental law firm representing the groups – said:

At a time when the world is grappling with a grave climate crisis, we cannot allow the oil industry to continue to expand its grip on America’s Arctic, where it will drill and destroy one of our most extraordinary, yet fragile, natural treasures

Then, on 26 August, 13 groups filed a suit against Trump’s changes to protections for Alaska’s wildlife. His administration has moved to make changes that would ease hunters’ ability to kill wolf and bear cubs in their dens in Alaska’s national parks. In fact, Trump’s US Fish and Wildlife Service (FWS) has very recently undone protections on numerous wildlife refuges across the country – handing a major win to trophy hunters. The Center for Biological Diversity’s carnivore conservation director Collette Adkins said of the legal action:

Not only are destructive predator control practices harmful and unsporting, they’re illegal when done on federal public lands set aside to protect biodiversity. I’m hopeful that the court will set things right again.

Laughably, Trump claims he’s made the US an environmental leader. Perhaps he has, in terms of being one of the worst the planet could hope for. But his record speaks for itself, and it’s a weak spot for him in electoral terms. Especially, as the polling shows, with a rapidly growing group of US voters ready to act on climate issues – and lawsuits landing in his lap on a near daily basis that lay bare just how environmentally destructive his presidency is.