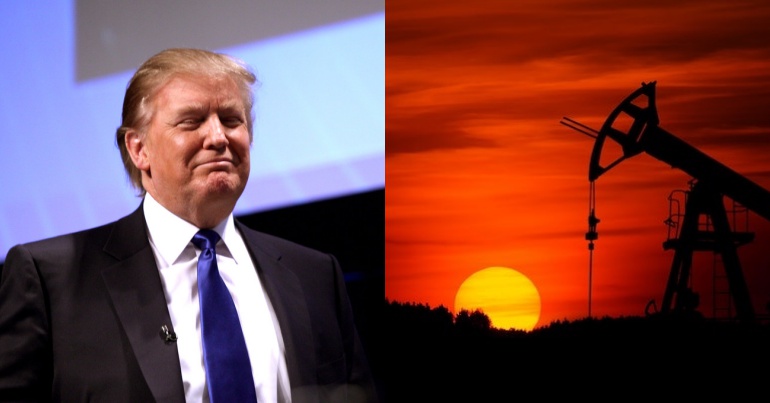 In a truly terrifying move, the US Department of Energy (DoE) sent out a press release rebranding fossil fuels as “molecules of U.S. freedom”. This comes as the planet faces climate breakdown.

The United States is again delivering a form of freedom to the European continent… And rather than in the form of young American soldiers, it’s in the form of liquefied natural gas.

When a reporter asked if it was fair to describe these exports as “freedom gas”, Parry replied, “yes, I think you may be correct in your observation”. According to EURACTIV, Parry also claimed these exports offered a “substantial supportive alternative to Russian gas”.

In a DoE press release on 28 May, US undersecretary of energy Mark Menezes said:

Increasing export capacity… is critical to spreading freedom gas throughout the world by giving America’s allies a diverse and affordable source of clean energy.

According to Menezes, this also creates “cleaner air here at home and around the globe”. He continued:

I am pleased that the Department of Energy is doing what it can to promote an efficient regulatory system that allows for molecules of U.S. freedom to be exported to the world.

US journalist Ellen Gilmer shared a copy of the press release on Twitter:

In October 2018, the UN Intergovernmental Panel on Climate Change (IPCC) released a devastating climate report. This concluded that global warming must be kept to 1.5°C at the most – half a degree hotter than right now – to limit the most severe effects of climate breakdown. According to the report, we don’t have much time left, because:

IPCC says 0.5°C more warming will create dire consequences: rising seas, droughts, further loss of biodiversity, and more. But, if we hit 2°C, the impact will be catastrophic. The report clearly identifies that reducing global reliance on fossil fuels is one of the key targets to limit further climate catastrophe.

Since Donald Trump came to office in 2017, US exports of LNG and other fossil fuels has surged. This is to achieve what the administration calls “energy dominance”. This is the next step on from Barack Obama’s energy policy. According to the Center for Public Integrity, Obama officials worked with “free-market academics and think tanks” to create “an echo chamber pushing fossil-fuel exports”.

Under Trump’s administration, the US withdrew from the Paris agreement and has continued to expand sales of fossil fuels globally. As the Guardian reported, a recent report also estimated that energy lobbyists in the US spend around $200m a year to “control or block policies” that may limit action to tackle the climate crisis.

Not surprisingly, as news of the DoE ‘rebranding’ spread, many people shared disbelief and outrage:

Some pointed out how dystopian this is:

War is peace
Freedom is gas
Ignorance is strength

Others, meanwhile, compared this to other acts from Trump’s administration:

No one should expect an Administration that tears apart families at the border or contaminates our air and water with toxic pollution to understand freedom, but this is a new low. #FreedomGas? https://t.co/1X9blQFGev

So fossil fuels get reclassified as “molecules of freedom” and woman lose their reproductive rights…. okay America.

As we tip closer towards climate catastrophe, rebranding fossil fuels as “molecules of freedom” may sound like satire. But it’s not – this is terrifyingly real. This move shows, yet again, how dangerous Trump’s administration truly is both for the future of humankind, and indeed to the planet itself.